Dark Winds, the new series from AMC, has a rather impressive pedigree. The series draws inspiration from the books of the late Tony Hillerman. Specifically, from his books about Joe Leaphorn and Jim Chee. In addition, it’s being brought to us by Robert Redford and a George R.R. Martin, who wrote some stories about dragons or something, I think. 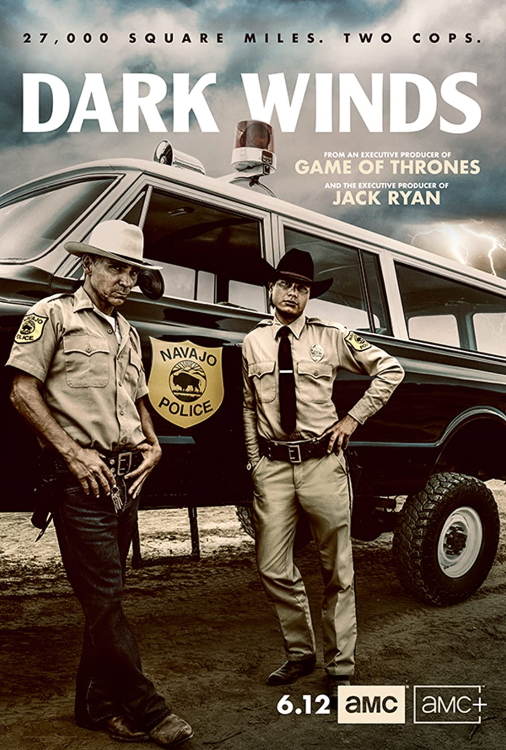 Redford is a longtime fan of the books, so much so that this ain’t his first time adapting them. For example, he produced a 1991 adaptation called The Dark Wind. About a decade after that, his late son James wrote an adaptation, Skinwalkers, for PBS’s Mystery! series, in which Adam Beach and Wes Studi starred. And now we’re here.

This time, we’ve got Zahn McClarnon taking on the role of veteran cop Lieutenant Joe Leaphorn, while Kiowa Gordon is playing new deputy Jim Chee. I first saw McClarnon in the second season of Fargo, where he was a standout in a great season. He’s been in a ton of stuff since then, including Hawkeye, Reservation Dogs, and this one sleep story I listen to on the Calm app. As for Gordon, you might have seen him also on Reservation Dogs or Roswell, New Mexico. Or, you know, that one movie series with shapeshifter wolves and some other characters I didn’t pay attention to. 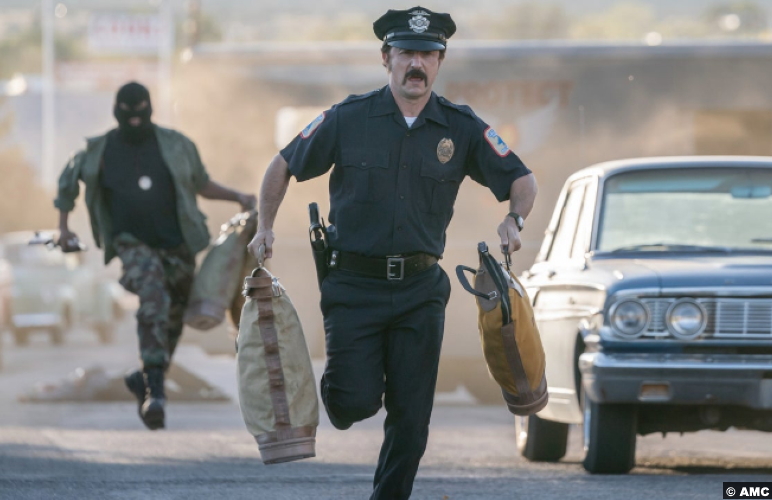 The moral of the story is, watch Reservation Dogs. But while we’re waiting for season 2 to come, should you watch this show? Well, let’s talk about it. I’ll set the stage. Picture it: Gallup, New Mexico, 1971. It all starts with an armored truck heist. It’s actually pretty brazen. The robbers, all masked, stop the vehicle by landing a helicopter in front of it. It’s broad daylight, tons of witnesses, but they get away. They are in a helicopter, after all. Witnesses do see it heading toward the Navajo rez, though. An older gentleman, whom we’ll later learn is Hosteen Tso, actually sees it passing over his homestead.

But we’ll get back to that. First, we meet our main characters. The first scene we get with Leaphorn is brief, but very telling. He’s making a man rebury pottery shards and such. “Artifact thief,” I write in my notes. Leaphorn tells the man that if he catches him stealing artifacts again, then he’ll be digging a hole for another purpose. Again, it’s just a glimpse, but it gives us a good idea of who this guy is. 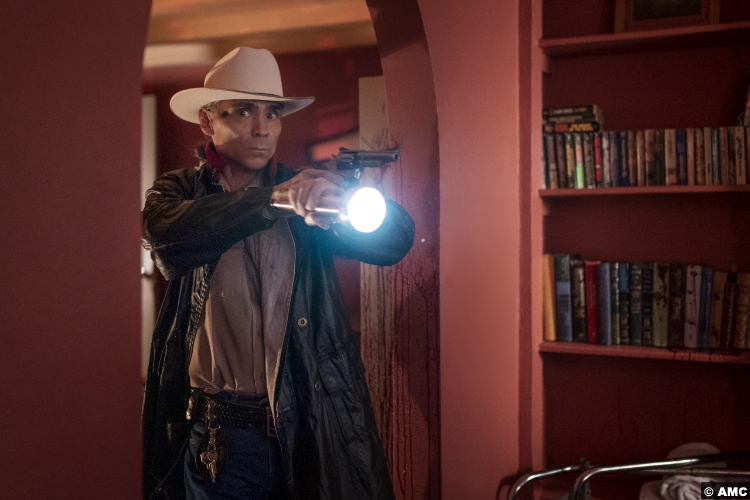 Chee’s introduction is just as good. We see him speeding through the desert, passing a stranded trio without even a look back. He’s on his way to his first day on the job as Leaphorn’s newest deputy. It comes as a surprise to the lieutenant, but he quickly assigns Sergeant Manuelito (Jessica Matten) to get Chee up to speed. Chee, a Berkeley grad, is returning to his home country, by the way. Boy, did he pick a hell of a time to come back.

On that note, at a motel that I think is on the rez, Hosteen Tso visits Anna Atcitty (Shawnee Pourier) and her blind grandmother. He’s seeking spiritual help from Nana, for which he offers a pair of glasses as a token. (Note: I am not Navajo and therefore, am not super familiar with their spiritual practices. As such, when it comes to stuff like that and other tribal-specific beliefs, I’m just going to describe it as the show presents it.)

The next time we see any of them, it’s Nana we see first. She’s in shock, sitting in the motel lobby. Hosteen’s body is on the floor of the motel room between the beds. His eyes, and as we’ll learn later, his liver, are all missing. We see this, incidentally, through Leaphorn’s eyes. After he hears a faint noise in the direction of the bathroom, he finds an open window in there and young Anna’s body in the tub. Her body bears none of the violence that the killer inflicted on Hosteen.

In fact, by episode’s end, we still won’t know how exactly Anna died. I would think that the difference would indicate that Hosteen was the target, but there’s another possibility. As they discuss, whoever did this might have known that the mutilation would be particularly upsetting to Native people. In any case, there is one thing we learn from the crime scene.

From the way Leaphorn reacts to the body, we can tell that there’s something personal here. It becomes clearer when he ferries Nana back home, when we see the way Anna’s dad reacts to Leaphorn. There’s bad blood between them. It’s not explained yet, but it appears as if Anna was once involved with Leaphorn’s son. It also seems as if the son is dead.

I gathered that from those scenes and the one with Leaphorn and his wife Emma (Deanna Allison). By the way, we first meet her on the job at an OB/GYN. She’s acting as a translator for the doctor and the patient, Sally Growing Thunder (Elva Guerra). The doctor wants Sally to have her baby at the hospital because it’s safer. Emma explains in Diné , though, that the doctor will sterilize her after she gives birth. (Yeah, probably.) 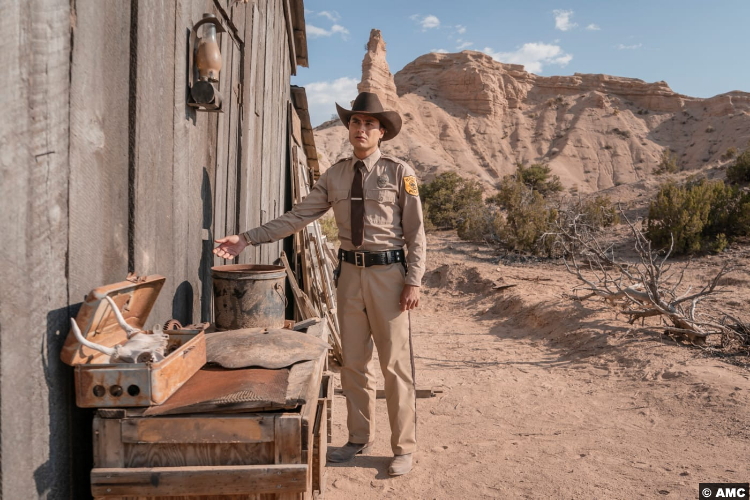 Speaking of uncomfortable historical truths, at this point in time, tribal police like Leaphorn didn’t have a lot of authority, even on tribal land. In fact, jurisdiction is still a thorny issue today, especially when it involves non-Natives. Anyway, that’s all to say that this double homicide requires that Leaphorn call in the feds. More specifically, he calls in Agent Whitover (Noah Emmerich).

Whitover goes through the motions with the bodies, but he’s really more interested in that truck heist. So much so that he’s embedded Jim Chee, who’s actually a federal agent, in the tribal police department. Whitover thinks the heist might be the work of a radical Indigenous group. Maybe not AIM (the American Indian Movement), but perhaps a group called the Buffalo Society. (AIM is real; I don’t know about the Buffalo folks.)

Meanwhile, Leaphorn, none the wiser about Chee’s true purpose, visits Hosteen’s property. A man who’d introduced himself as Benjamin, Hosteen’s grandson, is supposed to be staying there. Maybe that’s true, but I will say that Benjamin and his intense vibes raised my hackles. The reveal that the helicopter, with a corpse inside, is at the bottom of the lake on Hosteen’s land doesn’t make me feel any better.

9/10 – So this was basically the ideal example of a pilot episode. For one thing, it showed a lot without weighing us down in clunky exposition. But that’s just the icing on top. The cake underneath is a solid mystery with a lot of intriguing strings attached. (I have lost control of my metaphor.) Anyway, unlike a lot of shows based on books I review here, I’ve never read the source material. But that’s okay, because I’m still very much interested in whatever is going on here.