REVIEW: Halloween Kills is a hot mess from first kill to last

Halloween Kills is the sequel to the 2018 film, Halloween, which itself is meant to be a sequel to the 1978 film Halloween, which disregards all the original sequels to said movie. Considering how those movies were various shades of bad, it’s not a big loss, and the 2018 film was an effective movie, both as a throwback sort of horror film and as a long-delayed sequel. 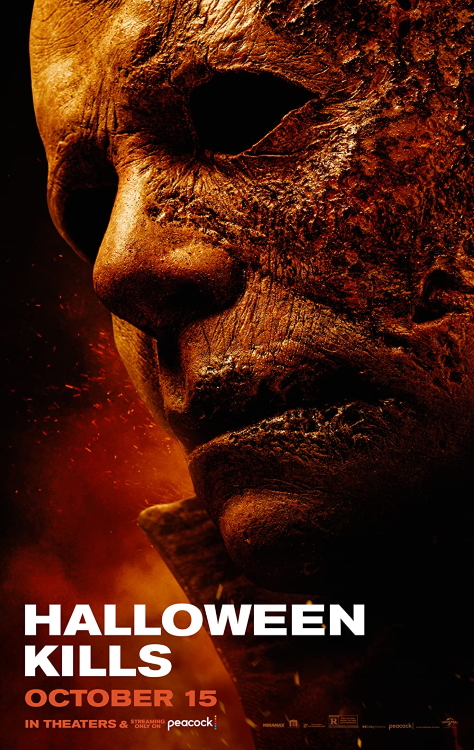 Now comes the sequel, which is billed as the second film in a trilogy, with the final movie, “Halloween Ends,” coming next year. In a lot of ways, the primary criticisms I have for this movie boil down to the fact that, as a middle film in the trilogy, it does nothing to justify its existence and what it does do as a film, it does too sloppily to appreciate. A middle film needs to raise the stakes, refocus priorities, point to an inevitable conclusion, and leave you ready to see the finale. This movie feels like the first half-hour of the final story was streeeeeeetched to ninety minutes, to turn a two-part series into a trilogy.

But even then, there were ideas to explore here that could have justified its existence, had they been properly examined. At the core of this movie is a very good idea that’s simply not well-executed.

As said, the 2018 movie was presented as a sequel to the original film, disregarding every sequel that followed, including the idea that Michael and Laurie were siblings. That’s fine. What that allowed was a central idea that this movie tries to explore and which (retroactively) strengthens the 2018 movie, which is that Michael has no particular feelings about Laurie at all, but the attack that she survived a generation ago so scarred her that she can’t help but be obsessed with him, which leads to them crossing paths over and over. In other words, if Laurie would simply let it all go and just move to another town, Michael would never go after her, but Laurie can’t do that; she’s too broken by what happened. Michael made her what she is and even though to him she was just another victim, to her Michael is the most important person in her life.

The way the previous film focused so much on the broken character of Laurie Strode was the highlight of that movie. Doubling down on that notion should have worked here. Credit to the writers for trying but the actual result is a movie too hammy and messy to do that good idea justice. 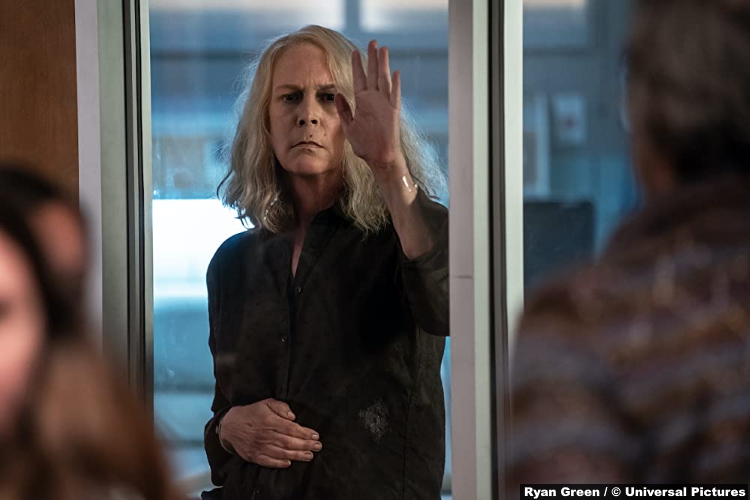 Halloween Kills is a hot mess of a movie and, tonally, I could never tell if I was supposed to be chuckling or not as very very few of the “horror” moments ever felt genuinely horrific. Case in point: There’s a scene where two characters hear a noise in their house and start creeping around to investigate. It’s a perfectly conventional setup for some tension and sudden scares, but the tone is too campy to work. For one thing, the two men are named “Little John” and “Big John” and while they search for the intruder they regularly call out to each other, like they’re playing a game of Marco Polo in a swimming pool. Someone had to deliberately name those guys Big John and Little John. Someone had to tell them to play Marco Polo. I can’t possibly be expected not to laugh at that, right? If you play the movie without sound, the scene isn’t blocked or staged like a comedy, but the dialogue and acting gave off those vibes. It’s tonally inconsistent.

A major subplot of the film revolves around the other survivors of the 1978 massacre. Some of these characters are played by new actors, most notably 80’s bit-player Anthony Michael Hall, and others feature the original film’s cast members (children in the original movie) reprising their role as adults. The idea of it works: Laurie isn’t the only victim of Michael who has a score to settle, and they set out to put a stop to him. The result, however, is an execution that fails: The gang looks like a mob of dweebs, goobers, and boomers who have no chance to take out Michael Myers. At one point, Anthony Michael Hall’s character, Tommy, starts shouting “evil dies tonight,” as he leads a mob to attack a mental patient that is clearly not Michael Myers. The scene is not particularly funny, but it’s not very dramatic either.

It’s camp, but I’m not sure if it was supposed to be. 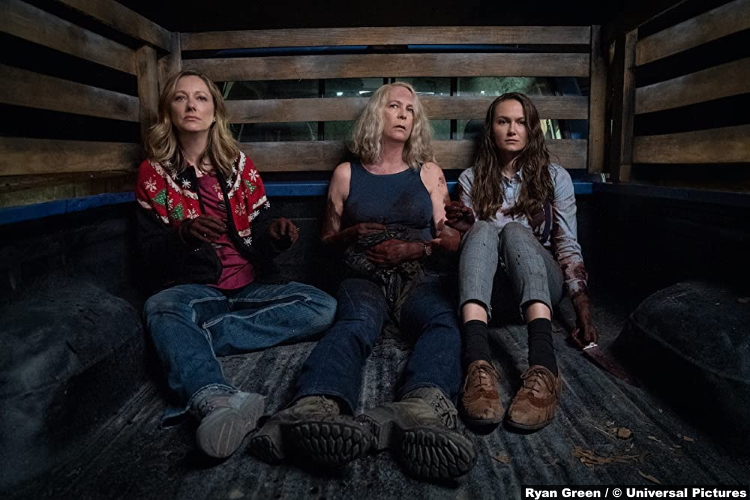 And speaking of the Boomer Mob, in the old canon of sequels, Michael was blatantly presented as this force of nature sort of villain that literally could not be killed. In these new movies, while there’s still an element of that at work, it seems to me that the real reason Michael keeps living is more obviously because the people trying to kill him are just tremendously bad at using weapons. Every person with a projectile weapon in this movie decides to (A) quip something snarky before firing their gun, and (B) get within knife’s reach of Michael before attempting to fire, giving the villain the opening to deflect, stab, and escape. In the film’s climax, the mob surround and attack the villain, and they all fall into the classic Walker Texas Ranger mistake of taking him on one at a time. 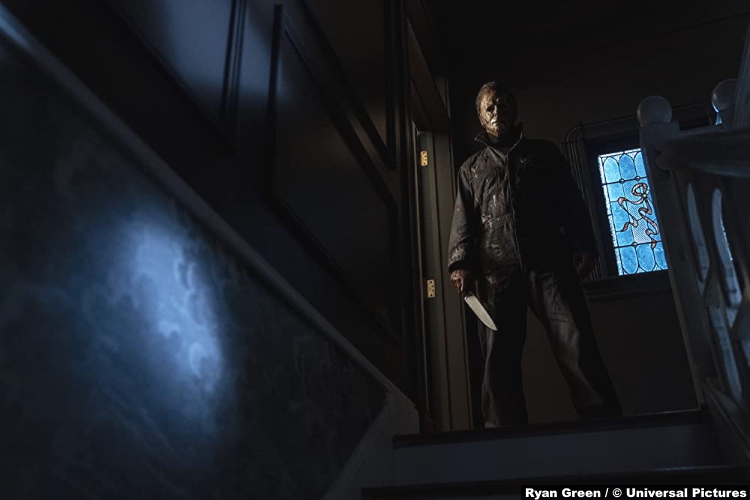 Speaking of, and this is just me being weird, but I felt oddly uncomfortable watching a mob take turns pummeling Michael Myers to “death” knowing that, at the end of the day, he’s a mentally handicapped person. The dialogue tries to sell me on the idea that “he’s evil personified” but really though, he’s just a nutcase, and in this same movie they depict another mentally handicapped person who escaped from the same bus as Michael in the 2018 movie, and they take great care to paint him sympathetically…before asking me to forget all that and root for the mob to beat the psychologically broken Michael Myers to death.

Again, the messaging and the tone are all over the place.

Bizarrely, I had a good time watching this movie, though it’s not nearly as polished and well-made as the 2018 film. I enjoyed that one because it knew what it was and executed its idea expertly. This movie does not do that: It builds and builds itself to a climax that feels like it should be the final climax to the story of Michael Myers and then…it isn’t. It leaves you only with the promise of a sequel that, presumably, will be the final story. Will it? There’s no way to know after this one baited and switched things. I’m left wondering what the point of this movie was: What did it accomplish? As far as I can tell the only thing it does was turn a very good two-part story into an alright three-part one.

7/10 – Halloween Kills is mildly entertaining for all the wrong reasons. 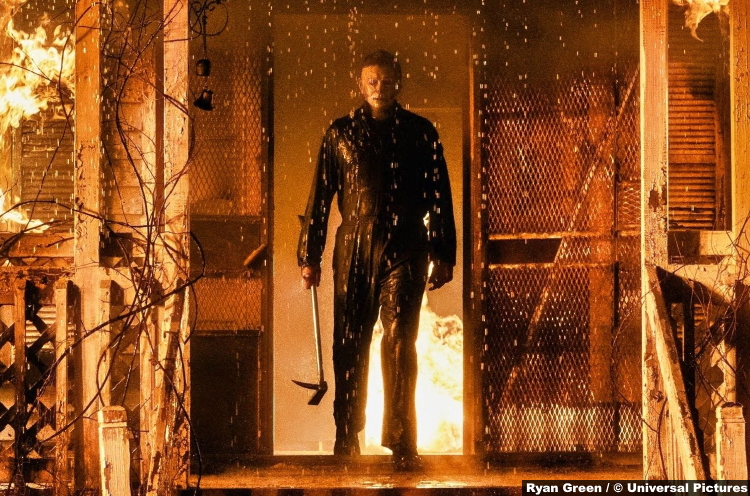