A Quiet Place (Part II) is the perfect horror sequel. That might seem like lofty praise but when you stop to think about it, the number of horror sequels that are even passable is shockingly low. Halloween 2? It’s alright but everything good about it was done better in the original. Evil Dead 2? That’s a great film but it’s basically a fifteen-minute remake of the original and the rest is its own standalone movie. Scream 2? Get outta here. Aliens? Not a horror. 28 Weeks Later? See Halloween 2.

And on it goes.

It’s very hard to make a good horror sequel because the things that usually make a horror movie great are dependent on experiencing said movie for the first time. The sense of mystery, the surprises, and the ominous feeling where you’re not sure who is going to make it out alive are all critical components to a great horror experience. When you get to the sequel, the mystery is either already established and thus not a mystery anymore or it’s simply retreading which makes the viewer feel like the movie is spinning its wheels. When you get to the sequel, the surprises don’t land as powerfully because you’re already used to the way the monster/villain does its thing. And when you get to the sequel, whoever survived the first movie and is the star of the second is immediately draped in plot armor and you never worry about them: You fear for Laurie’s life in Halloween, but you never wonder if she’s going to die in the sequels.

Sequels, almost by nature, are impossible to pull off in a horror setting but it’s not just the key elements that make it hard to duplicate, it’s the way most of them are made that makes them only good in small doses. Sequels tend to expose all the flaws that are overlooked the first time around.

There are, in my opinion, two major flaws that “bad” horror movies stumble into having.

First, they have too many scares too often. Usually, this is because there’s not enough story or plot to give the characters anything to do, so that lack of development is covered up by the now-cliched cycle of “two minutes of tension, thirty seconds of fear, ten minutes of reset, two minutes of tension, thirty seconds of fear, ten minutes of reset, etc” that most of the cookie-cutter horror movies of the day rely on. By the end of the movie, you’ve had enough “BOO!” to last a lifetime and you’re desensitized to it all. The writers and directors of these movies know that, which means they have to up the ante to a stupid degree as the movie progresses. How do you follow that up in a sequel? You can’t have the first scare in the sequel be on the same level as the last scare in the original, so you start over at zero, which creates boredom in the audience that’s already done the roller coaster ride in the original outing.

Second, they waste their non-frightening moments on exposition. Just focus on this the next time you watch a mediocre horror movie, like an Insidious 3 or a Ring 2. Whenever you’re not in the “tension” or “scary moments” portion of the movie, you’re forced to listen to characters tell you why they’re acting stupid enough to continue putting themselves in dangerous situations, or why the baddie is doing what it does (as if we want or need to have the mysterious monster explained to us). Again, this is a fault of the writing, which gives the characters nothing to do except (A) be scared, and (B) explain why they’re scared. There’s no development, no growth, no nuance in bad horror movies.

It was a great horror movie, in fact, and was my favorite horror film from 2018. Three years ago I wrote this about the movie…

My favorite horror movie of 2018 worked because it laid out a very specific set of rules and meticulously followed them. If you want, there’s a thousand little holes you can poke in the movie’s universe, but just in terms of the bubble in which this story is presented, John Krasinski (who directed and co-wrote) put obvious care into making everything logical. I appreciate that kind of attention to detail. Oh, and the story and set pieces are great too. Craft a good movie, put some respect for your audience into your work, and do something unusual with the genre (in this case “make a horror movie where no one can scream”) and you’ve got the recipe for something special.

A sequel was announced almost as soon as the big opening weekend was over, but it’s hard to make a good horror sequel. Now that it’s out, does it pull it off? Yes, as said: This is the perfect horror sequel. 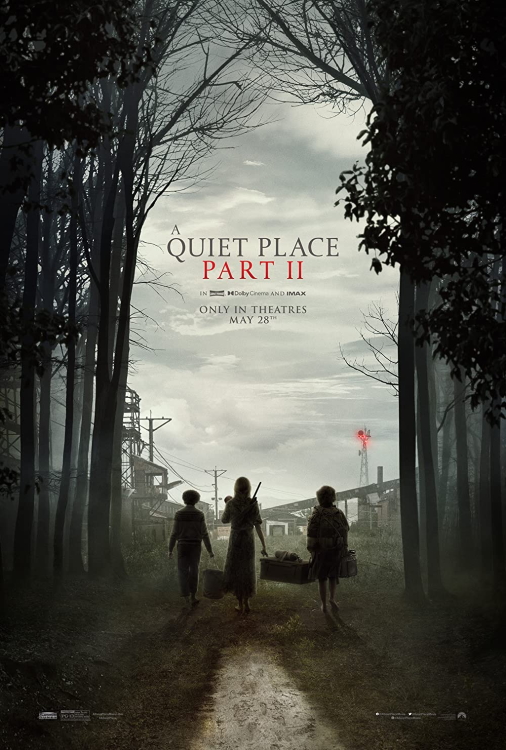 It has a plot and a purpose

There are, of course, thrilling and terrifying moments alike, but when the movie gets quiet, it doesn’t waste those moments with clunky exposition or empty time-filler dialogue quips. There’s a story being told, a driving goal that motivates the heroes. So many horror movies devolve into “just survive!” or “just get out of there before it’s too late!” They make the agency of the protagonists entirely dependent on the villain. They’re being chased. They’re hiding. It’s always passive action, which makes for a bad protagonist. A Quiet Place (Part II) gives the heroes a goal: In the A-plot, it’s “get to a broadcasting radio station to play a sound that will stun the baddies.” In the B-plot, it’s “get medical supplies to treat an injury.” Our heroes move with a purpose, leaving it to the monsters to serve merely as foils to contend with along the way. 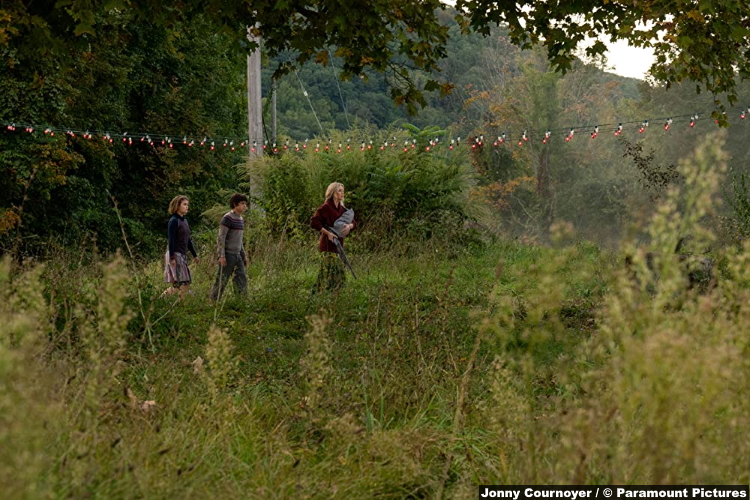 It has fantastic direction and editing

John Krasinski directed the original movie, and contributed somewhat to the screenplay. The sequel is all his. He is tagged as “writer/director” and with this, he has proven himself to be a tremendous talent. Midway through the movie, the family at the center of the story has to separate, each following their own respective plots. On a surface level, there is no connection between the two stories that follow. Through the magic of editing and blocking, these two storylines play off of each other like mirror images. The film builds to a series of dramatic and thrilling high points throughout the picture, timing it so that both plot threads peak at the same time, allowing the switching back and forth between the two to retain the same sense of emotional engagement. It’s practically Nolanesque how well it was handled. 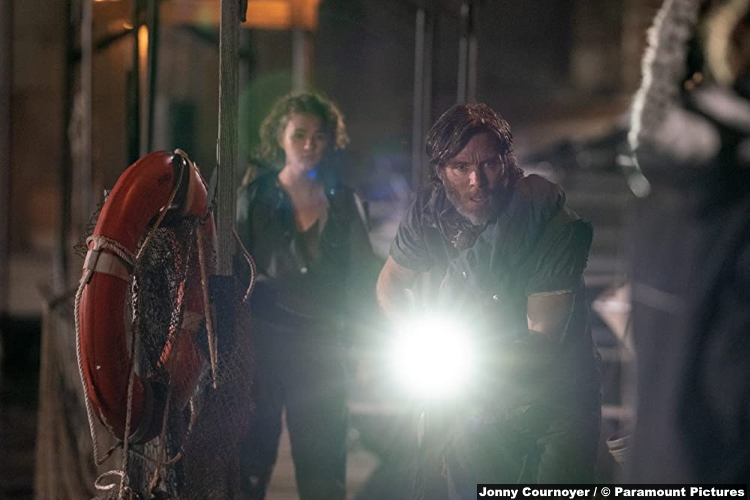 It has the perfect balance of story and scares

As said, the common flaw of horror sequels is the fact that the story was weak in the original so there’s nothing to build on; all you can do is throw more and more, bigger and bigger set pieces and horror moments at the audience until no one cares anymore. In this movie, there’s not a set piece or sequence that’s any more or any less terrifying or thrilling than what was found in the original movie. Instead of going bigger or smaller, Krasinski goes sideways. The first movie was very reserved in how much horror it doled out (until the finale). It says something about how effective the film is with pacing and spreading out its big moments when the most effective and skin-crawling jump-scare involved nothing more than stepping on a nail. The sequel doesn’t break what’s not broken. It takes the same pacing and commitment to characters and simply tells a new story that builds off the plot from the first. The scares are still there, but they garnish, not the main course. 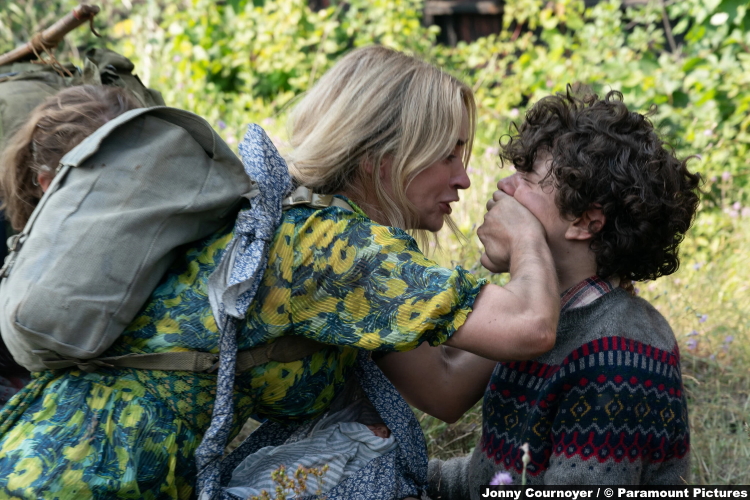 The result is a movie that holds your attention from beginning to end, and does something no horror sequel has ever done: It makes you eagerly anticipate a third film.

10/10 – I can’t praise the job John Krasinski did in bringing this movie to life. A Quiet Place (Part II) will go down as a horror sequel that shines as brightly as its excellently original.