Your SO OF COURSE preview of WWE SUMMERSLAM 2021!

Last time on SO OF COURSE, it was THE VERY MUCH “PROVERBIAL” BRASS RING!

Money in the Bank has come and gone and now all eyes turn to the biggest party of the summer. And by “all eyes” I mean “a steadily diminishing number of increasingly frustrated fans,” and by “biggest” I mean “the second-biggest sporting event happening in Las Vegas this weekend, behind Manny Pacquiao and Errol Spence, which isn’t even a must-see fight,” and by “party” I mean “multi-hour slog where the company reminds us how much the actually hate their fanbase and most of their performers too.”

But it is “of the summer” so good job there, WWE.

Yes, without further ado it’s time for WWE SUMMER IS ALMOST OVER WHICH MEANS THE NFL IS LOOMING WHICH MEANS MONDAY NIGHT RAW IS PROBABLY GOING TO LOSE ANOTHER 250k VIEWERS WHICH MEANS DYNAMITE, WHICH IS CURRENTLY ABOUT 500k VIEWERS AWAY FROM TYING THEM MIGHT JUST GET OVER THE HUMP, WATCH OUT FOR THE BIG “GRAND SLAM” SHOW THAT MIGHT JUST FEATURE THE DEBUT OF BRIAN DANIELSON 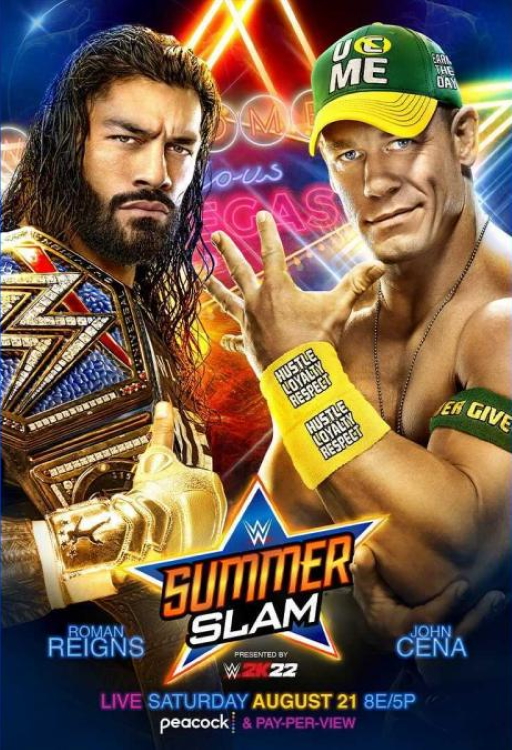 What it be? It be a match I didn’t expect. A month ago I remarked that WWE would probably move the tag titles off of Styles to give him a proper singles opponent for SummerSlam. Instead…here we are.

Do I care? Actually yeah. Randy Orton is entertaining when he has someone to play off of. Riddle is great. Styles is great. Omos is…getting there. I’m not on the edge of my seat but I don’t expect a disaster. Let’s give it 5 bros out of 8.

Who should win? Orton/Riddle winning seems like the kind of finish to give the crowd some fun at SummerFest. Feels like we’ve gone as far as we can with the current state of Styles/Omos. Drop the titles and move to the next chapter on the slow walk to an (endless series of 50/50 booked) one-on-one match(es).

What it be? It be 2/3s of the legendary 3MB, both of whom are former WWE Champions and neither of whom are Heath Slater, so this is just sad all the way around.

Do I care? I mean…no. I’ll sing Drew McIntyre’s praises all day long. He did a great job as the champion through the pandemic/no-crowds period, but there’s just nothing here that gets me excited. Let’s give it 2 MBs out of 8

Who should win? Drew is still a viable contender to the championship and needs to be protected. This one seems obvious.

What it be? It be, not exactly the same thing as Fake Razor, Fake Diesel, Fake Kane, Fake Undertaker, and any other gimmick-transposed character WWE has tried over the years, but it’s close. It’s not exactly the same thing because Bliss technically started out as a lackey to The Fiend, but the fact that WWE fired him and has kept the gimmick and its intellectual property going, to be used by Bliss is…kinda icky.

Do I care? Nevermind all the politics and whatnot, this is Alexa Bliss vs Eva Marie. There’s nothing to care about unless you’re one of those people who likes to watch train wrecks. Let’s give it 1 gimmick appropriation out of 8

Who should win? Lol, what even do I say? This is like the stoppable force meeting the movable object. I just hope no one gets dropped awkwardly on their head.

What it be? It be a banger, I’ll bet. If they keep this under thirty minutes and keep the tempo up (which is always a problem in big Edge matches, they tend to slow down in and last about 5-10 minutes longer than needed), it can be the best match of the night, and probably will be by default.

Do I care? This is the match I’m most excited for from a workrate perspective. I expect it to deliver. Let’s give it 7  turnbuckle bombs that make me hold my breath out of 8

Who should win? Seth, because Edge is the part-timer and the part-timer should put over someone that is having to help carry the whole company right now.

What it be? It be the second-best match on the card, in terms of workrate, that almost didn’t happen because of medical issues. Hopefully, everyone is 100% and can put on a show because that’s what these two do, whether on their own or against each other: They put on a show.

Do I care? Very much. This feels like the kind of match that makes a statement and cements Belair as the new face of the division. Let’s give it 6 sickening hair whip-cracks out of 8

Who should win? Belair, for reasons already stated. You don’t hotshot the title back to the established star in this case. Belair needs the win. Don’t cut the legs out from under her.

What it be? It be me patiently waiting for Becky Lynch to return.

Do I care? Is Becky Lynch returning? If yes then yes, if no then no. Until I know for sure, let’s give it 4 additional championship wins to get Charlotte closer to 16 out of 8

Who should win? Nikki? She’s not exactly setting the world on fire. I can’t stomach another Charlotte win. Rhea, I guess, but she’s cooled off (in part thanks to the way she was booked earlier this year). Shoot, just have it end in a smoz and bring Becky out to stunner everyone.

What it be? It be Old Man Berg vs the Ageless Bobby.

Do I care? Nope.gif But it’s a title match and maybe there’ll be some shenanigans or something to keep me hooked. I’ll give it 3 sweat-drenched spears out of 8.

Who should win? Big E.

What it be? Icon vs Icon? Not really but it’s the biggest match possible for either man right now.

Do I care? I’m not expecting art. It’ll be a spectacle but it’ll be the most “main-event” main-event match you’ll see from WWE this year. Let’s give it 8 huge crowd reactions out of 8

Who should win? Roman, because he’s staying and Cena isn’t (long term). I think this will be something in between the Lesnar vs Cena match at SummerSlam, where he ragdolled John here and there and everywhere, and a standard Roman Reigns match with a lot of nearfalls and headlocks and a very lively crowd that goes crazy for the final few minutes.