REVIEW: Army of the Dead brings Zack Snyder back to his roots

For better or worse, Army of the Dead is the most Zack Snyder thing since the last Zack Snyder thing. The movie is a return to the universe he first stepped into with Dawn of the Dead in 2004. In the seventeen years since then, Snyder has gone on to direct half a dozen other films and become one of the most visually distinctive and commercially polarizing directors working in Hollywood. These days, every Snyder movie is immediately received with jeers from those who think he’s a hack, and cheers from his loyal fans who think he’s an underappreciated genius. The only thing close to a middle ground with him is the horde of people who simply don’t watch his movies at all. Those who do watch them have one opinion or the other; there is no middle ground. The closest thing to a consensus you’ll find is with Dawn of the Dead being a “pretty good zombie movie.” 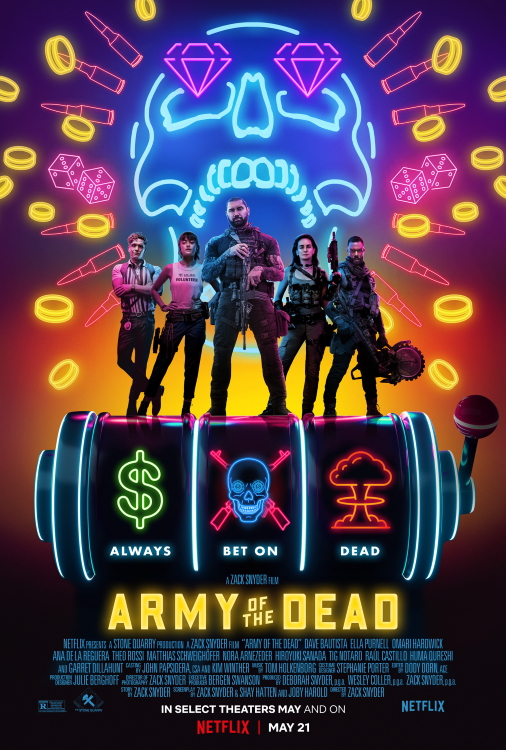 It’s fitting then that the director would return to this genre as he begins the second phase of his career. It’s his first film away from Warner Bros since Dawn of the Dead and his first since finishing his cut of Justice League. If Army of the Dead is meant to represent a kind of reset button for the director, I think he mostly accomplished his goal, but that doesn’t mean he has changed the way he works his craft: Snyder is still Snyder. All this movie does is take his style out of the superhero genre and return it to something relatively smaller scale… 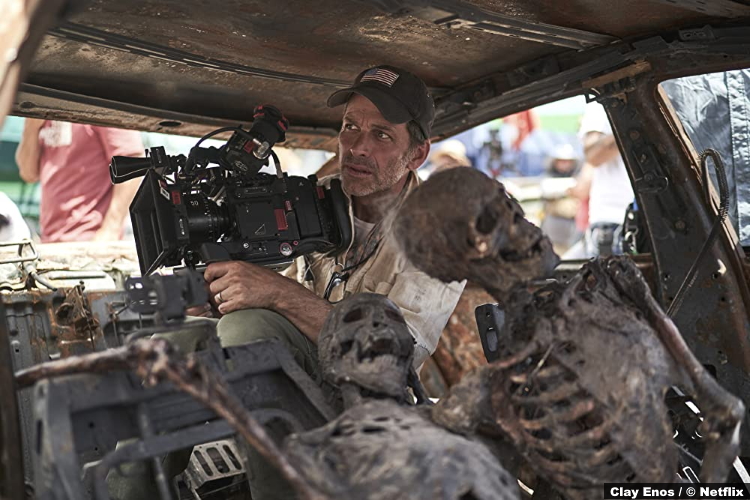 There’s a lot to like about Army of the Dead. My problem is I’m not sure if the things I enjoyed, and the way I enjoyed them, were the point of the movie. At times I wondered if I wasn’t supposed to be taking things more seriously, when in fact I was chuckling and rolling my eyes. If this was a satire, I think it would be an A+ film. If it was meant to be played straight, then it stumbled.

In the seventeen years since Dawn of the Dead, Snyder has added to his repertoire as a director. He hasn’t changed or evolved, per se, the way a director like Spielberg has done over his long career. Instead, it’s more that he has added to wrinkles to the established formula he likes and the style he prefers. This movie is a return to his roots, and while parts of it are elevated by what he’s learned over the years, just as much has been hampered by some of the baggage he’s started carrying.

There are two scenes to highlight that illustrate how quintessentially “Zack Snyder” the movie is.

First is the opening credits, which run nearly six minutes long. It serves as a slo-mo montage showing what happened to make Las Vegas the sealed-off wasteland of zombies that it is for the duration of the film. We’re introduced to a few of the key characters but, since the entire thing is a series of slo-mo shots, we’re only introduced to them through stylized visuals, no dialogue or character development. To top it off, the credits are accompanied by the most overly sincere, warbling, bad lounge singer, too-slow rendition of Elvis’ 1964 hit “Viva Las Vegas” that you will ever hear. I don’t begrudge the song choice; it’s a bit on the nose, but that’s fine. My problem is the tone of the whole sequence never quite lands. Maybe it’s because it overstays its welcome, or maybe it’s just a bad cover of the song.

The second scene to highlight is just one of many revolving around the character of the alpha-zombie…king? Is he like the king? The movie is really vague on the details, (intentionally, apparently) but the scene in question comes after the Zombie King (let’s say) has found the decapitated body of his Queen, carried it back to his lair, and cut out his unborn prince to show to all his zombie minions. The scene in question comes after that parade of surreal insanity: The King rallies his troops, slaps on a helmet, hops on a zombie horse and starts trotting down the desolate, warzone-like streets of Las Vegas. Oh, and he has a spear in his hand. 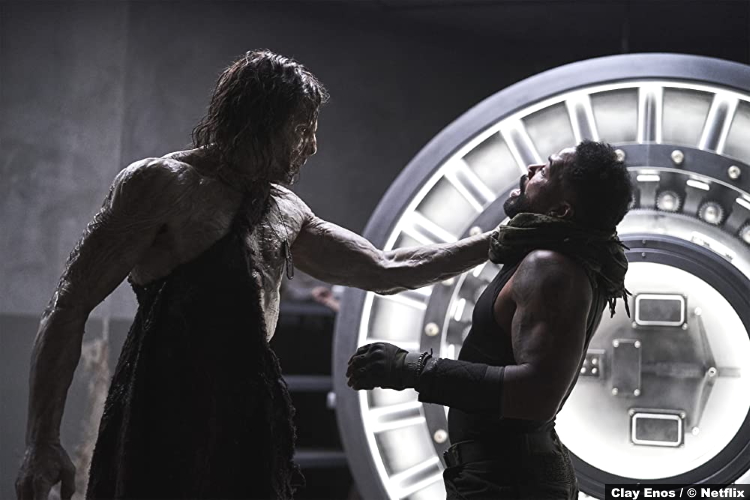 I had to pause the movie just to confirm what I was seeing was really on my screen.

And of course, the Zombie King is a muscle-bound, shirtless adonis. The only thing missing to complete the “300 cosplay” of it all is a quick dip in some baby oil. Being a zombie, he was instead splashed with a kind of greenish grime-looking stuff.

The man’s come a long way to hone his craft.

Ultimately, the movie will live or die on whether or not you dig Snyder’s style. Personally, I dig it. I don’t think he’s God’s gift to filmmaking, but he’s got an incredible eye and really knows how to put together a scene. Those qualities are here in spades, but so are his downsides. Snyder’s movies sometimes become over-indulgent to the point where he almost forgets to tell an overall story that links his beautifully shot scenes together. That happened in Army of the Dead, with a pace that was all over the place: The first act, for example, could have been halved if the director and editor had just moved on at a snappier pace from scene to scene.

Also, I get that they want to spin this off into a wider universe/franchise (there’s a TV series in development that will answer some of the lingering questions), but just considering this movie on its own merits, the whole thing felt at times like Snyder was spending $20 to make $10. There was so much lore packed into its 2.5-hour runtime when the whole story could have been told as a tight, 90 minute “Oceans 11 meets Zombies” romp. I mean, you could have excised the entire subplot featuring the daughter and the movie would have lost nothing of value. But I get it, there’s a wider world being introduced here, and Snyder was given carte blanche by Netflix to let loose. You can’t say he didn’t take it. 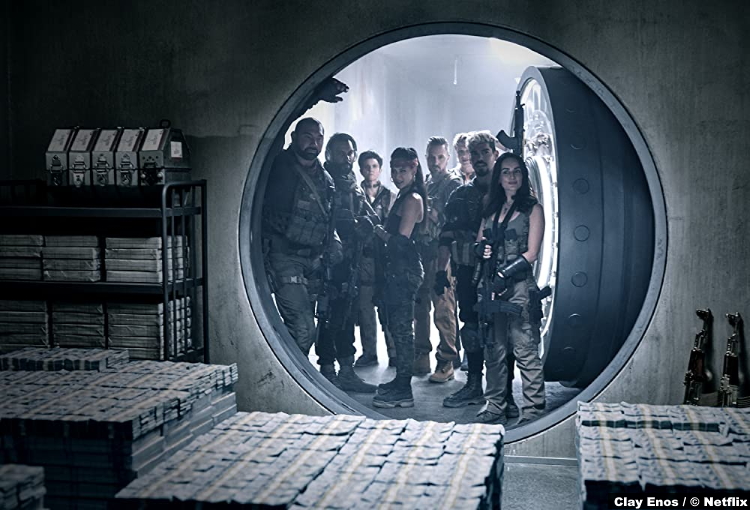 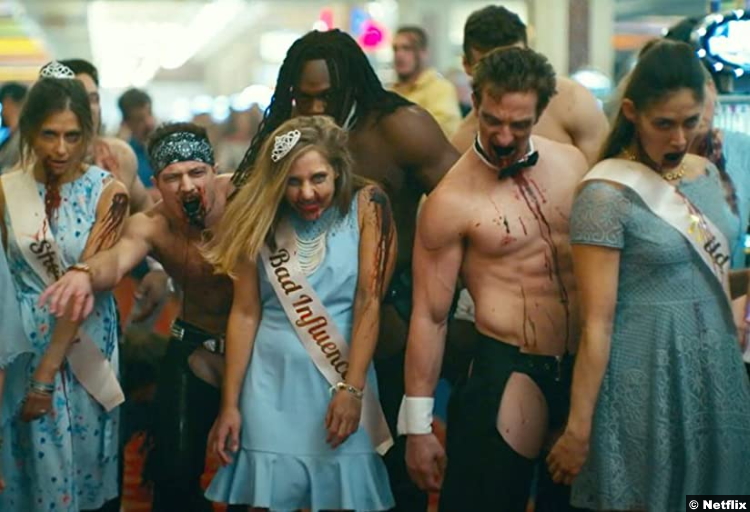 If you can look past the flaws typical for the director, Army of the Dead is a movie with plenty of action, some good character interactions, a couple of great moments (there’s a neck-breaking shot that was perfectly executed), and plenty of Tig Notaro snark. I can’t get enough of Tig Notaro’s snark.

7/10 – Army of the Dead is a solid zombie-action movie that is only dragged down by a few of the director’s trademark hang-ups.