REVIEW: Raya and the Last Dragon misses its chance

When Pixar first burst onto the scene with Toy Story, it came at a time when Disney‘s traditional animated features were waning. The heyday of the Renaissance-era that began with The Little Mermaid and arguably peaked with The Lion King, was starting to show some wear and tear. Pocahontas was not the uber hit the company expected, nor was The Hunchback of Notre Dame or Hercules. Successful movies though they were, they didn’t touch the cultural zeitgeist the way Aladdin or Beauty and the Beast had done.

As one side of the coin waned, the other blossomed; Pixar went on a remarkable streak spanning movies from 1995’s Toy Story to 2010’s Toy Story 3, with only a Cars in the middle acting as anything close to a misfire. After that, Pixar slipped a bit and while they still produced the occasional gem, they also were just as capable of releasing a supreme nothingburger like Cars 2 or The Good Dinosaur.

At the same time, while Pixar was showing its fallibility, Disney’s in-house animated studio was finding its mojo again, releasing a string of greats from The Princess and the Frog to Moana. So it was with great anticipation that I sat down to watch Raya and the Last Dragon, which seemed to fuse two favorites of mine: East Asian Antiquity and the modern Disney animated fairytale.

Perhaps my sights were set too high. 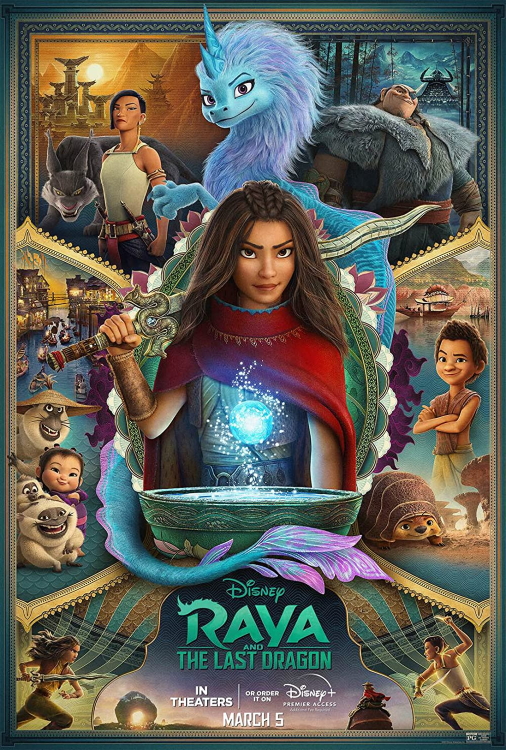 There are so many things that work in this movie’s favor that it’s a heartbreaker for me to walk away from it feeling so underwhelmed. On the plus side, the movie is, as expected, gorgeous to watch. Silky smooth animation, with some beautiful lighting effects and expressions, make it a joy for the eyes. The art and sound design are top-notch as well and really capture the east-Asian vibe Disney was going for. Most of the characters are as charming as you would expect, the setting (a cluster of islands, each with its own climate, culture, and indigenous people) is fantastical enough to fit the story, and the story is equally fantastical enough to justify its premise.

As for the premise, I love how much influence the movie takes from east-Asian mythology and culture. The beginning of the film features eastern-dragons being revered as guardian spirits, bringing blessings to the people and bestowing gems to ward off evil. It’s a different kind of “fantasy” than the western-style that Disney relied on to achieve its initial success. The dragons here are not like the great beast that Prince Phillip fought at the end of Sleeping Beauty. These dragons are less like great winged dinosaur-looking things, and more like the long, serpentine creatures that have existed in ancient writings for millennia longer than the western-style wyvern-looking things we associate with dragons today.  As someone who grew up reading and watching media that depicted art and fantasy from that side of the globe, it was a cause of great excitement to see it depicted with the full weight of a Disney budget behind it. 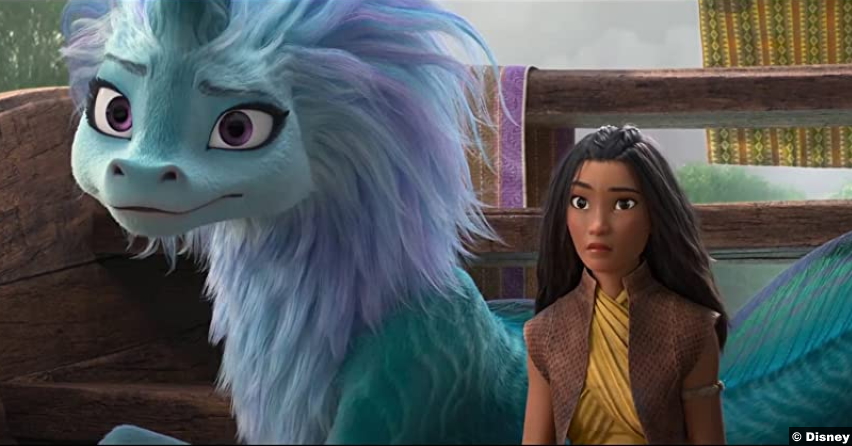 First is the screenplay. While I love the story and the overall plot, the movie only really works on a visceral level when no one is talking. Whenever the story has to be carried by dialogue, the film screeches to a halt and draws the worst kind of attention to itself. It would be one thing—tolerable if not more—if the dialogue was legitimately witty or anyway clever. It would be another—again, tolerable at least—thing if the dialogue was more poignant, melancholic, or earnest, without relying on charm or wit. The story certainly opened the door for that kind of interpretation. Instead, the movie went for a light-hearted, laugh-a-minute script without any laughs to be found. It tries (hard) but never lands a joke. It’s a movie that thinks it is much funnier than it is, and the worst offender of this (and my second problem) is the titular dragon herself.

For much of the first act of the movie, I was feeling it, I was into it, I was loving the world-building and the premise being established. I had a lingering fear that Disney would take this beautiful world and “Disneyfy it” to the point of eye-rolling cliché, but throughout the first act, the Mouse showed restraint.

But then act two happened, and the movie becomes the exact “silly Disney movie that happens to be set in ancient vague-Asia” I was afraid of. Maybe, it’s my own fault for hoping for something akin to a Disney-produced Miyazaki movie, but I just wanted the premise to be used to its fullest potential and that was never going to happen with the dragon at the heart of the story being presented the way she was. 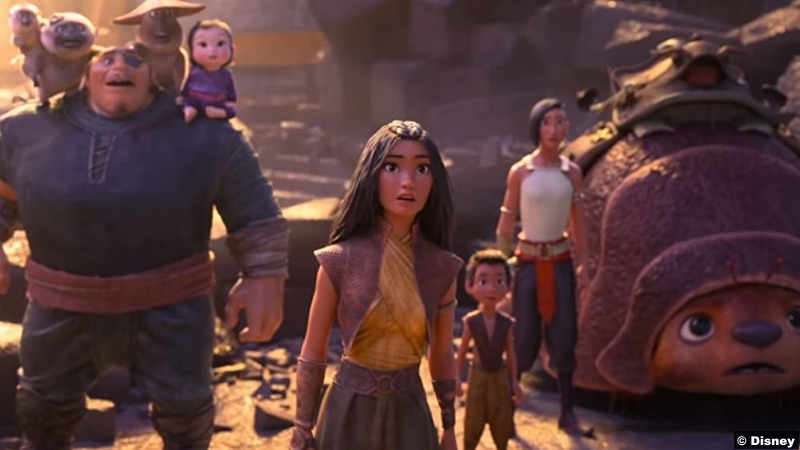 The dragon in this movie is a wannabe Mushu from the animated Mulan, and I say that not because of the Asian-dragon connection, but rather because of the “quip-filled, sassy dialogue, taking nothing serious (until the story demands it) approach to the character’s personality. The idea is one thing and, truth be told, I have problems with the very idea that this east-Asian dragon-deity would be portrayed as a “hip lingo” spewing, finger-snapping, sass-talker, but if they had at least made the character legitimately funny, I wouldn’t mind it so much. Instead, she, like the screenplay as a whole, is just not funny, which only draws that much more attention to how out of character it is for this kind of a dragon, in this world, to be so silly and “normal” in her personality. 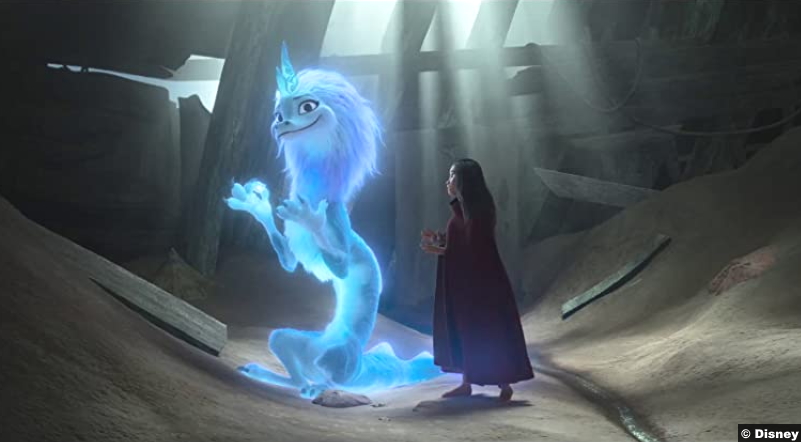 The portrayal of the dragon undercuts the mystical, wise, supernatural quality that an Eastern dragon is supposed to convey. They’re not meant to be relatable. They’re meant to be so special and almost other-worldly we can’t fully understand them. They’re manifestations of concepts like divine providence, protection, and vengeance.

They’re not supposed to be goofy.

But Disney couldn’t help themselves, I guess. And to be clear, I try not to critique a movie for what it wasn’t trying to do, but in this case, it’s warranted: Disney deliberately used the Asian aesthetic. Unless that was just a gimmick to them, as a way to score higher ticket sales in that part of the world,  I would have liked them to embrace the culture they were showcasing, and not slap a “western animated” coat of paint on it, because that’s exactly what this is: It’s a cliched, late-2000’s Disney animated movie with a very slick and appealing coat of paint layered over the top.

7/10 – The film is beautiful, and its first act has great world-building. Its third act has some strong story beats and a good ending, almost enough to redeem it. But a movie’s middle act is the movie, and in Raya’s case, the middle features a movie too unwilling to embrace its aesthetic, relying instead on the same old formula and the same old clichés that brought about Disney’s middling post-Renaissance era in the first place.