Your SO OF COURSE preview of WWE Elimination Chamber 2021

Sure, I might’ve gone in with a “Daniel Bryan or bust” mentality but I was very sports-entertained by the result, and by the Rumble match in general. There weren’t as many big surprises but it was well-paced, had a ton of fun spots, and a great finish. Actually, both Rumbles had great finishes. I didn’t have Bianca Belair on my radar to win it because, quite frankly, she’s exactly the kind of incredible talent that would, for some stupid reason or another, never get a push. Instead, she’s getting a push, so I’m happy to see how high she can climb (if they let her, she can climb very high indeed).

With the Royal Rumble out of the way, WrestleMania is in our sights but there are two shows in between the two big events. One of the two in-between shows will likely have zero consequences. The other is this one. So get ready, get hyped, and if you’re in the middle 25 or so states in the US of A, get an extra blanket or three, and get set for this, your SO OF COURSE preview of WWE ELIMINAT—E THE IMPOSSIBLE AND WHATEVER REMAINS NO MATTER HOW IMPROBABLE MUST BE A CHARLOTTE FLAIR VICTORY 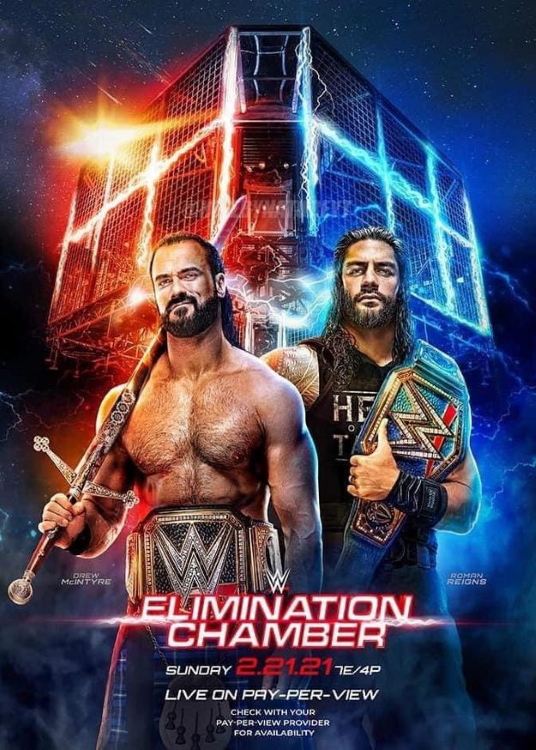 What it is: It’s the match that will determine the champion. We’re a little under two months away from WrestleMania and while that’s an eternity in a world where storylines and three-hour shows are written on the day the cameras roll, it’s usually the case that the head cheese knows the direction of his company, and more specifically, the world title scene several months before Mania. In fact, it used to be customary for the WWF/E title match to be relatively set in stone around Survivor Series time, or just before the Rumble at the latest. After all, if you don’t know your Mania title match, how can you book the Rumble winner? Well, this year they’re really taking “Vince just wings it” to a whole new level. I’m hoping they know by now, but honestly, I think this match’s finish is a foregone conclusion.

Do I care: 7/10 – These matches are usually very fun whenever there are six believable winners involved. When it’s three or four and a few scrubs, the necessary length of the match makes things drag. The Raw match has three strong possibilities with another trio of former champs that don’t really have a chance to win (Sheamus, Jeff Hardy, Kofi Kingston), so I worry it’s going to be a long and not exciting half-hour, followed by a very fun final fifteen minutes.

Who should win: Drew because he’s the guy they ought to be trying to build around and he doesn’t need to be remembered as “Pandemic Bret Hart,” i.e. the guy they let carry the belt until something better comes along, never appreciating how good he is in the role. If Drew is the future, and he certainly ought to be, then you don’t take the title off him two months before Mania, and certainly not for a match between two guys with a combined age of almost a century, while sticking Drew with someone like Sheamus (the ultimate in bad WrestleMania consolation prizes).

What it is: It’s a Hoss vs an MMA heavyweight vs an MMA middleweight (note: those weight-classes might be completely wrong but I don’t care and I’m not googling it).  On paper, it should be a ton of fun, but I worry this particular combination of wrestlers might not mesh well together. Keith Lee works better against someone with experience, and while Bobby Lashley has fifteen years of experience, he’s also Bobby Lashley and has never been a guy capable of carrying a younger performer. The odd duck is (Matt)Riddle, who is supremely athletic and has charisma for days, but he’s here to eat the pin and get ragdoll’d by the other two guys, so…

Who should win: Riddle, if only because he’s a guy who should be groomed as a future world champ.

What it is: It’s Charlotte. Somehow. Lacey Evans is prego so she’s out. Someone has to replace her and there are so many options on the tabl—it’s Charlotte.

Who should win: Asuka, but…

What it is: It’s an intriguing twist on the formula. The winner of the match will be the number one contender, with the title match happening that same night. I’m going to go ahead and predict the title match happens immediately following, because that’s a heel thing to do, making this one-half of a potentially strong main-event for the night. Unfortunately, of the six guys in the match…three are tin cans, one is a cinderella they’re never going to pull the trigger on, one has already lost a title match just last month, and the other is Daniel Bryan. I’m a little more intrigued here because the title match will happen on the same night, so you can have anyone you want to win and it won’t ultimately matter (Roman is retaining either way, I mean come on).

Do I care: 9/10 – I know I said Chamber matches without a lot of legit contenders are usually boring, but the combination of the added stipulation and the fact that everyone in the match is a good worker (except for Corbin which means—bonus SO OF COURSE—he’ll probably be the first one in and the last one pinned), means I’ll probably enjoy this a lot more than the other one.

Who should win: Daniel Bryan and he should win the title too. No one would see it coming. He could win, carry the belt to Mania and then lose it to Roman, maybe even as a retirement match (please don’t Daniel unless you just want to).

What it is: It’s a match wholly dependent on the Chamber match that precedes it. I’m calling for Bryan vs Reigns.

Who should win: As said, Bryan. I’m not usually in favor of a dominant champ losing outside of Mania, but I do like seeing a scrappy underdog beat the big bad, and those descriptions are never more apt than when applied to Daniel Bryan and Roman Reigns.