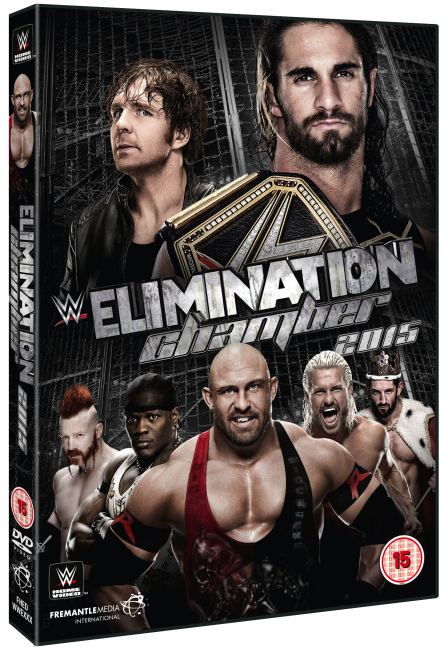 Seemingly announced on a whim, Elimination Chamber was the third of three big shows in the month of May (Payback and NXT Takeover came before it). That being said, the card itself had curiosity value of the bat with the announcement that the Intercontinental Championship would be defended inside the impressive structure.

The novelty of seeing mid-carders inside the domain (generally) of those vying for the World Championship was compounded by the first-ever Tag-Team Elimination Chamber Match. Initial buzz was on whether it would be the teams in a pod together or three teams with only one person in the pod. In the end, we had 13 wrestlers in the match due to The New Day exercising their Freebird Rule status.

The big question was whether the match itself would be any good or if the amount of wrestlers would cause a train wreck instead.

On the night, the opener was a mixture of both. Worst performer was undoubtedly Kalisto, who seemed to have no idea he was on TV and just wanted to climb the cage. New Day and Titus O’Neil were the stand-outs and this was the last time The Ascension looked anywhere near competent.

As a huge fan of theirs when they were in NXT, the sub-Emma level of apathy they have received from the booking team upon their move to the main roster has been astoundingly disheartening.

Jumping ahead, the IC EC was also a bit of a disappointment, but had some nice sequences from the guys involved. It’s just a shame that it came about due to Daniel Bryan becoming as fragile as a hummingbird and having to vacate the title one year after he had to do likewise with the WWE World Heavyweight Championship.

The “breather” matches between the big bouts were decent, but didn’t get the time the other matches did, so were rather forgettable. The Divas Title scene is in need of a major revamp and at the time of writing this, the NXT Women (Sasha Banks, Charlotte and – be still my beating heart – Becky Lynch) made a triumphant debut on RAW, so it seems that might actually be happening.

Stardust v Neville was the definition of card filler, but did it’s job well enough and Neville’s acrobatics continue to impress the WWE Universe with every outing.

Despite being in the middle of the card and with no titles on the line, John Cena v Kevin Owens was the true main-event of Elimination Chamber. Owens, the dominant NXT Champion came to RAW and got right in the US Champ’s face, calling him out and challenging him outright to face him in his main-roster debut.

For over 20mins, these two put on an instant classic, a bona fide Match of the Year candidate. It’s not an understatement to say that John Cena has been exceptional as champion since taking the belt from Rusev and the quality of his bouts have been off the charts against a myriad of “random” opponents.

Kane, Bad News Barrett, Stardust, Dean Ambrose, Zack Ryder, Sami Zayn, Neville, Cesaro and Rusev have all been made to look great and semi-credible against Cena, with the recent outings of Cesaro (two weeks in a row) being the pick of a great bunch.

Kevin Owens had been the heel on NXT who crippled his best friend (twice), powerbombed the first name out of Neville and even pinned Finn Bálor in the middle of the ring. Setting his sights higher, he had a lot to prove coming in and to say he lived up to those expectations is a massive understatement.

In fact, I’d say this match is worth owning the disc for on its own.

For a while, it seemed that WWE had forgotten about Ambrose and reduced him to random craziness and nothing else. However, a few weeks of rehab and here he was; a viable threat to his former stablemate’s title.

Roman Reigns banned from ringside put Dean on the backfoot as Rollins was again accompanied by J&J Security (the uncrowned kings of comedic skits in recent times) and Kane.

The match was pretty damn good, with both men getting in their signature spots (although Ambrose needs to be taken aside and told to moderate his use of the pendulum lariat) and the finish, while splitting opinions, was (for me) perfectly executed).

Three extras on the disc, with one match (from the pre-show) and a segment from Ryback and Nikki Bella.

OK for a watch, but nothing to get excited about.

As said, the novelty of seeing non-main-event talent inside the Elimination Chamber is a valid selling point, while Kevin Owens v John Cena and Seth v Dean are fantastic wrestling matches. In all, four of the six matches go over 20mins and that is not to be sniffed at.

The big issue going forward with the DVD releases, especially of “PPV” events, is that now the UK has access to the WWE Network, you can get the event plus the rest of the back catalogue for £9.99 (for one month), which is £3.00 cheaper.

For those of us who are regular subscribers to the Network, I cannot in good conscience say that you’re better of buying the DVD of a PPV or Network Special. Of course, when it comes to the profile DVDs or the specials (like the upcoming Monday Night War retrospective), the Network rarely shows the full thing, so those will generally remain must-buys.

Due to this, the score below is in relation to the event itself only. If you do not have access to the Network, then you won’t be disappointed in buying this (as you won’t have seen it), for the rest, it depends on how completist you are