I always write a preview of the PPV but I was so disgruntled last month I could only lament the sad state of the company.

Since then, a draft has been held and the company has gone through a soft  (very soft) reset. Have things improved? Nah, but I can’t write the same “WWE sucks here’s ten reasons why” every month. So, at least for now, I’ll pretend that I care, which is more than WWE these days. After all, I’m here to write a preview of this month’s PPV and, wouldn’t you know it, there are only four matches announced.

The event is this Sunday and there are only four matches announced.

So, yeah. I will at least pretend to care while I preview WWE HELL 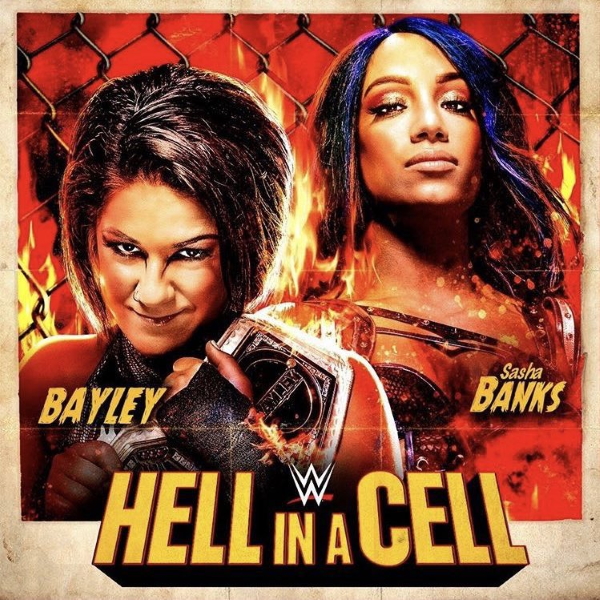 HELL IN A CELL MATCH FOR THE WWE CHAMPIONSHIP: DREW MCINTYRE (c) vs RANDY ORTON

What it is: It’s the most prestigious title in the company curtain-jerking a C-level show. It’s also the third match in a row for these two, and if this isn’t the last one then why are we even doing a Hell in a Cell? It’s bad enough the match that, once upon a time, used to be the feud-ender, career-threatener, show-stealer, mega-match, has now become an annual gimmick match that happens not once, not twice, but—this year—three times on the same show. The least they can do is let this put an already-tiresome feud to bed with it.

Level of Excitement: 5/10 – A “5” ranking, in this case, signifies a lack of excitement going in, with the understanding that something might happen that gets me talking. On the other hand, this being the opening contest means I’m not likely to see anything more than a fairly standard “PG-rated” hardcore brawl that ends with a 1-2-3 for the current champ.

Who should win: There’s no reason Randy Orton should be a champion in 2020. There’s also no reason Drew should lose the title until he’s had a chance to raise the belt in front of actual people in the stands. Put those together and there’s a negative-infinity reason anyone other than Drew McIntyre should win.

What it is: It’s the return-match for the Superstar who was only ever over because of his guitar anyway. Elias went away to deal with an injury and then returned in time to be slotted into the role of “people who wish to do Jeff Hardy bodily harm.” Also on that list: Jeff Hardy. He crashed a guitar over Jeff’s head and that’s all it took for a feud to start. I remember when feuds used to start over things like spilled cups of coffee, so I can’t complain. Well, I can, but I promised I’d resist.

Level of Excitement: 6/10 – It’ll be fine, but it’s a filler match, meant to serve as a buffer between two HIAC contests. As such, expect a fair amount of non-wrestling shenanigans and scant violence, to keep the crazy limited to the big cage.

Who should win: I mean, do you ever want Elias to be something more than “a weird cross between Randy Savage and Jeff Jarrett” or should he just remain a novelty act forever? A win over Jeff Hardy can easily be spun into an undercard Survivor Series elimination match next month, and then a blowoff in December. A Jeff Hardy win just feels unnecessarily rushed.

HELL IN A CELL MATCH FOR THE WWE WOMEN’S CHAMPIONSHIP: BALEY (C) VS SASHA BANKS

What it is: It’s Bayley the heel vs Sasha the (by default) babyface. Not the dynamic most expected for the latest match in their on-again, off-again rivalry, but then again, Bayley has been so perfect as a heel it’s no surprise that they kept the ball in her court. She recently surpassed Charlotte as the woman with the most combined days as a champion in WWF/E history. Sasha remains the best.

Level of Excitement: 9/10 – It’s hard for me not to get excited about these two; they’re the Hart/Michaels of the women’s division. I expect them to pull out all the stops, with both looking to prove that the women’s division is doing just fine in the absence of Becky Lynch.

Who should win: Gotta keep Bayley strong for Charlotte! Just kidding, but it does feel like a Bayley win is coming. The only reason I could see putting the belt on Sasha is if they plan on moving it to someone like Ronda Rousey sometime around the Royal Rumble. Barring that, keeping the belt on the heel champ who has more than proven her worth is the right call.

HELL IN A CELL MATCH FOR THE WWE UNIVERSAL CHAMPIONSHIP: ROMAN REIGNS (C) VS JEY USO

What it is: Well it’s the best thing in WWE right now…and it’s Roman Reigns. We’ve been saying for five years that if WWE wanted to get the cynical, jaded, anti-corporate fans to love the company’s “chosen star” the only thing to do is turn him heel. WWE fans are consistently contrarian: Give them a babyface and they’ll boo him. Give them a heel and they’ll cheer. Why it took five years to do this I don’t know but now that the lever has been pulled there’s nothing better on WWE TV. Even with his first major feud as a heel coming against one half of a tag team, the story has been compelling, both in terms of Roman’s personal character development, as well as the story of the feud itself. This is good stuff.

Level of Excitement: 9/10 – This gets a high ranking purely out of morbid curiosity. The last time these two squared off, Roman left him a broken and battered mess. Now they’re stepping into an environment where “a bloody mess” is the baseline expectation. I don’t know what they have planned but I know it’s going to keep me glued to the screen.

Who should win: Look, no one thought Jey Uso was beating Roman Reigns last month, and no one thinks it this month either. There’s only one winner here. What matters is how they get to the win and what the story coming out of it will be. If it’s anything like the lead-up, it’s going to be a great story coming out of it.