It’s no secret that I have had many problems with CBS All Access’ new Star Trek shows. I recognize that it’s very easy to dismiss my complaints as the rantings of an old fan not happy with a new thing. After all, many fans of the Original Series railed against TNG when it debuted in the late ’80s. The thing is, though, TNG was not good when it debuted, so a lot of those criticisms were justified. As the years went on, TNG won many TOS fans over due to their great storylines, compelling characters, and a commitment to exploring the human condition in an optimistic future. It’s hard to hate something that clearly is trying to give the fans what they want. TNG started out as too cerebral, too pacifist, too quirky. It was too different from TOS. But, as the show found its footing, it found a way to incorporate what worked in TOS with what worked in TNG. The result was a foundation for a 24th Century-franchise of shows that lasted for nearly twenty years.

Now here I am, a fan who grew up watching those 24th Century shows, railing against the new thing to come along. You can dismiss that, but I would point out: Discovery (and Picard), like TNG, has not been good in its early years.

My problem with Disco’s second season is also simple: The show knew exactly what it wanted to be, and that was a dumb melodrama in space. Even the things I liked about the season (which almost entirely begin and end with Christopher Pike) were ultimately superfluous. Pike and Spock felt tacked on and needless as it related to the overall plot of the season. But then again, the overall plot was so idiotic, I can’t complain too much that the show gave me a few bright spots in an otherwise horrible season.

So now Discovery comes to its third season. It was TNG’s third season where they finally turned the corner and won over TOS skeptics. Can Discovery win over fans like me the way TNG did so many years ago? 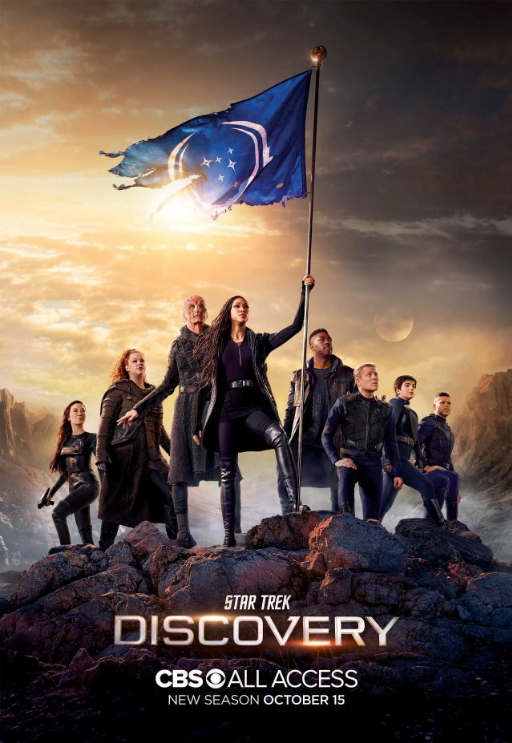 After the first episode…my hopes are not high.

My problem—admittedly, after only one episode—is that the fundamental problem I have with the show hasn’t improved: It’s still just dumb schlock. TNG turned the corner because the writing improved. Michael Pillar became the showrunner and said: “This show is about our characters. Every plot is about how it relates to what our characters are going through that week.” That internal focus on the half-dozen characters at the heart of the show is what turned so many good “sci-fi ideas” into great “Star Trek episodes.”

Discovery hasn’t done that. Instead, they’re trying to fix the show’s fundamental problems by putting band-aids on the bleeding gashes. 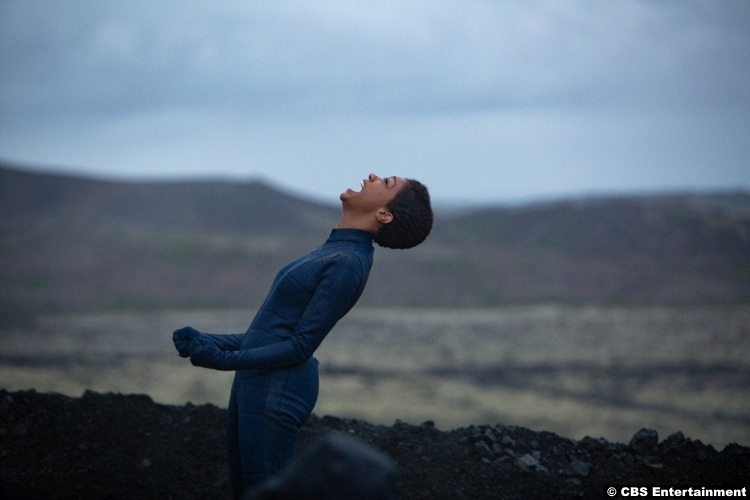 Moving the show to the future is very different from the time jump done in TNG. That was a two-generation leap. Dr. McCoy was in the first episode for crying out loud. Spock showed up for a big two-parter. This isn’t a couple of generations; Discovery has jumped forward over seven-hundred years. TNG’s small jump meant they were able to reset a lot of TOS norms and show off some new tech without everything looking too different.

Discovery’s third season is so far ahead in the future, the show is stuck in a catch-22…

Discovery seems to be hoping to try a third option: The setting might as well be a different sci-fi universe, but the tech isn’t all that different from what we’re used to in the old shows. How can that be? Well, they’re explaining it away by saying there was a galactic-wide apocalyptic event. So that’s what Star Trek is now: Mad Max in space. And with that comes the big revelation in episode one: The Federation is basically gone. 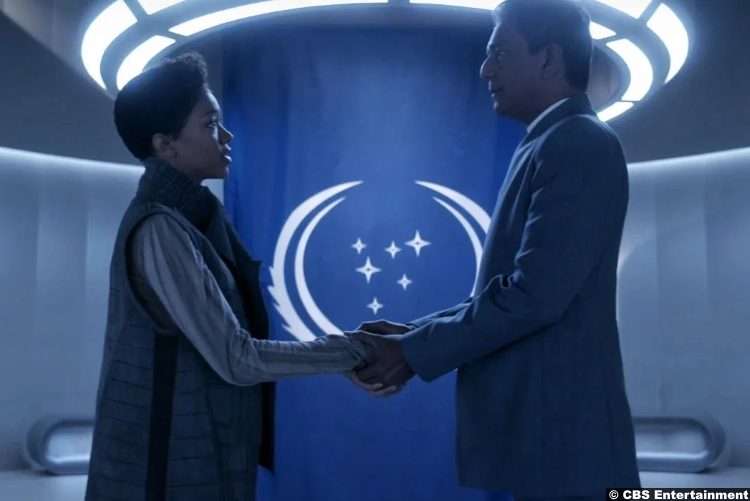 And there it is, the evidence I need to know that nuTrek has not learned its lesson about what makes Star Trek (when done right) so special.

The fundamental notion of Star Trek is that the future is bright. It’s aspirational. That’s the point. Take that away and you’re left with a ship without a rudder. That’s why these new shows all feel so aimless. They’re cynical, and when they’re not cynical they’re confused about why they’re supposed to be optimistic. It’s like building a house without a foundation: You can raise the walls and put a roof on top; from a distance, it looks like a house, but all it takes is a stiff breeze and the whole thing collapses.

So what about the episode in particular?

I have notes, but little else.

The first act showed me nothing is really going to change with the feel or tone of the show: Michael is still over-acting to the point of looking unhinged and unstable. There’s a needless shaking camera, too much melodrama, and a paper-thin story that runs out of steam about half-way in.

More than anything, there was never a point where it felt like Star Trek, so I guess I just have to give up on that. It’s not Star Trek. It’s some other sci-fi show that has stolen the name and a few sound effects, but this is something else entirely. Thus, I will try to review it as something else entirely. I will base my ratings on how good it is as a TV show, and not as a Star Trek show (except for those times where it tries to rely on its Star Trek roots as a substitute for its own world-building). After all, that’s basically all Discovery has been from the beginning: Some new, off-brand sci-fi show that occasionally uses the Star Trek brand as a substitute for its own world-building.

Michael remains a frustrating protagonist. She wins every fight, solves every problem, knows every detail, convinces every skeptic. It’s all so tiresome and boring. 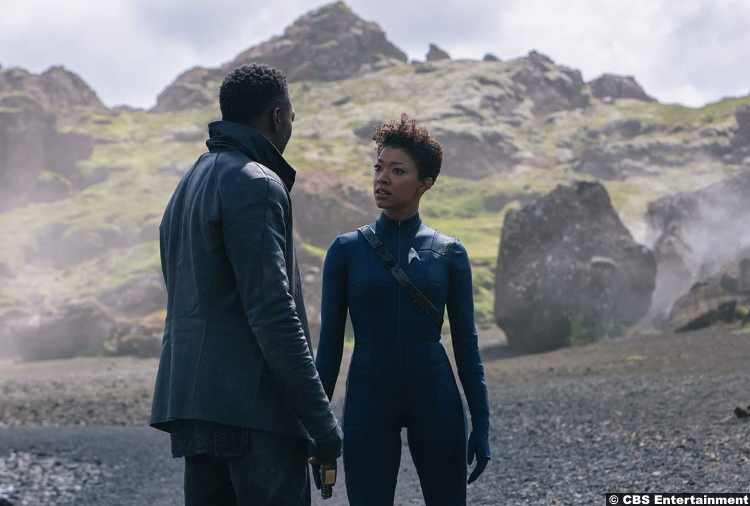 This episode was just exposition and fighting. There’s no plot. No purpose. No moral. No point. It’s a part-one of two and, based on the preview for next week, we’ll be going back to see what the rest of the Discovery crew was doing while Michael was running around on the planet. Already it feels like they had one episode, decided to split it, and then padded padded padded.

They did the same “guy says something, Michael responds by punching” bit twice in a two-minute span. Come on guys, that’s just lazy.

In conclusion, this isn’t Star Trek, but it’s not even good “generic” sci-fi either. It reminds of a 1950s sci-fi pulp novel: It’s cheesy, with little story, nothing but action, a random monster attack. All it needs is needless cleavage and a $0.99 price sticker on the cover.

Michael meets someone and, three minutes later, declares him to be “the finest Federation officer I’ve ever met.” Girl, you JUST met him, what are you talking about? That’s the kind of needless first draft crap writing that I just can’t overlook. Other fans can, and I envy those fans. There are circles of Star Trek fandom that are all about Discovery. I wish I could love it, too. 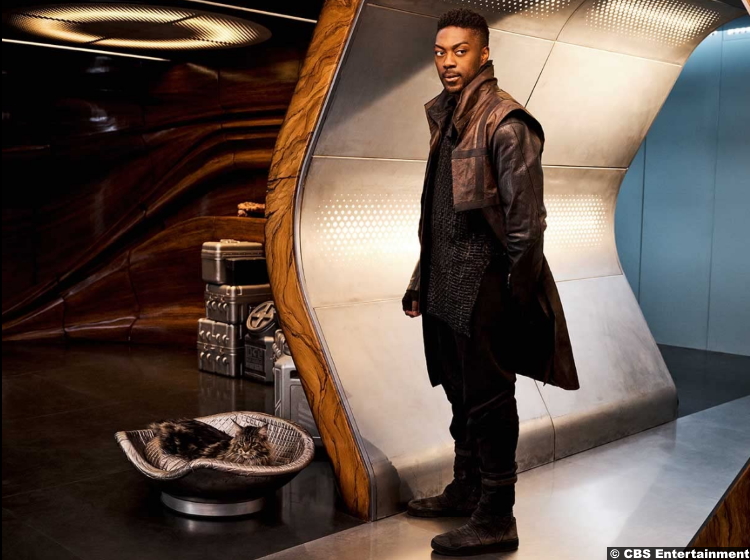 More than that I just wish it was Star Trek.

2/10 – Meandering, pointless, acting self-important without any of those melodramatic emotions being earned. It’s one half of a two-part reset for the show, the fourth such reset in three years. I’ve lost hope they’ll ever get to the second level.

No more episode by episode reviews from me. I don’t like being so negative unless it’s fun, and there’s nothing fun about this. I’ll watch the next several episodes and then write one review about how the season is progressing.