Riverdale S04E18 Review: Lynchian – A return to the tickle tapes!

Man, if there’s a Riverdale plotline that could cool my heart faster than the prospect of the annual musical episode, it’s a return to the tickle tapes. (Believe me, I hate the fact that I had to type that phrase way more than y’all could hate reading it.)

This week’s episode is titled “Lynchian” in an apparent homage to you-know-who. The fact that Mädchen Amick is on the show should be enough; please don’t drag your tickle vids into this, too. 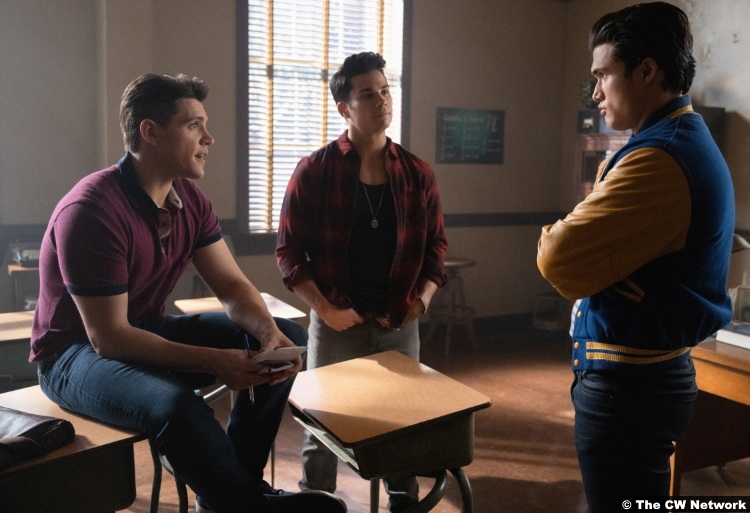 Anyway, Reggie’s low on cash, but he’s noticed that Kevin and Fangs aren’t, so he wants in on whatever “scam” they’re running. Of course, they’re just making fetish videos for a creepy adult. They explain this to Reggie, telling him that they’re making “non-sexual” videos–no–and he wants in.

Then he gets other members of the football team and the Vixens to join. Then he wants to cut Terry out of the action. I would also like to be excluded from this narrative. Terry threatens Kevin, but Reggie threatens him right back.

And their plan would have worked perfectly, except someone (Terry) anonymously complains to Mr. Honey. Since these teenage ding-dongs are all wearing their school-furnished uniforms in the videos, Mr. Honey is able to put the kibosh on the whole thing. He doesn’t want the good name of Riverdale, the school where people have been murdered during musicals and whose former principal left to join a cult, stained. Sure.

But videos are the running theme of this episode. Yes, there’s also a tangent into the fraught world of rum running, but it’s as whatever as usual. I was thinking earlier this week about Veronica’s storylines and I realized what bugs me the most. Veronica is a smart cookie, yet she keeps getting stranded in these repetitive storylines with her father. I know he’s obviously her blindspot, but you’d think at some point she’d anticipate that he’s going to pull the football away before she can kick it.

Instead, this time, she lets her rivalry with him pull her into a rivalry with the Malloys, whom we’ve just found out also make maple liquor. I realize that Riverdale’s actual geographic location is kinda fuzzy, but there are hints that it’s supposed to be somewhere in New York or at least somewhere in the northern United States. (Witness the regular snow.) So I’m supposed to buy that there are “hillbillies” up yonder running stills? (Forget it, Salome, it’s Riverdale.) And then Hiram killed a guy. 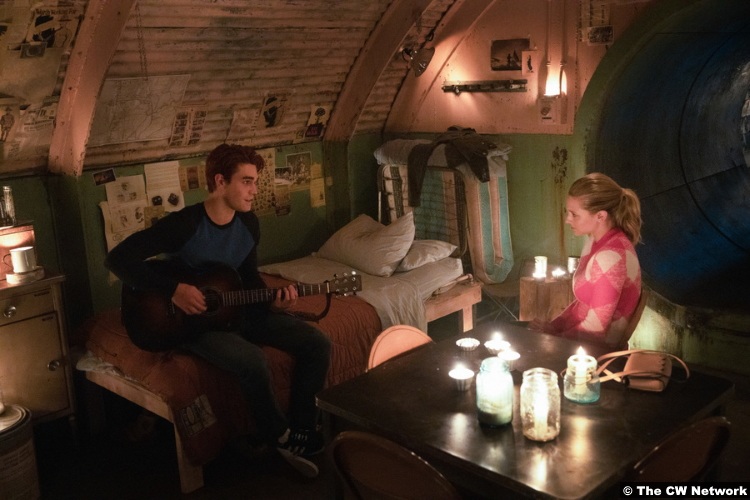 Okay, back to videos. The other more important videos in R-town are the anonymous ones being sent to locals. Obviously, Jughead was startled by the one he saw last time, that depicted his fake murder. So, he decides to look into it with Charles. Betty, on the other hand, has sworn off detecting this week so she can reminisce about her childhood love of Archie. She will ultimately decide that anything growing between them now is a non-starter, so I’m glad we wasted that time.

Videos! Focus. Jughead sees Ethel, who still exists, dropping off a video at the police station, so she becomes suspect number one. Exhibit A: Her entire history. Besides that, she has plenty of opportunity as the president of Riverdale High’s A/V club with its collection of tapes and cameras. Somehow–it’s Riverdale–Charles is able to search her family’s home, where he finds that sex tape of Jughead and Betty. 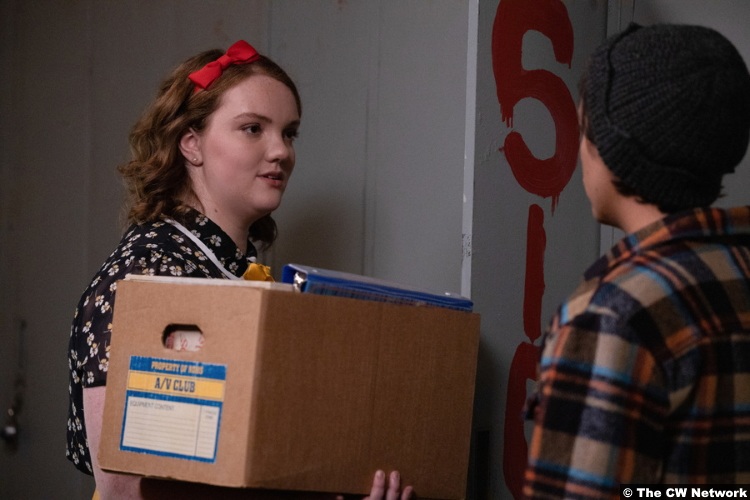 Ethel denies being the videotape voyeur, claiming that she has the “Ponytail Playmate” video (gross) only because she saw it at the local video store. God knows what she thought it was, but she says that when she realized what it actually was, she kept it so no one else would see it.

So they raid the Blue Velvet*–please stop–video store, which has a back room of illicit tapes, including the surveillance clip of Clifford Blossom murdering his son. That gets the video store shut down, which is lamented by none other than Mr. Honey. Aw, he seemed so nice so far.

And Cheryl is the latest recipient of the personalized mask video, as she receives one depicting her brother’s death.

7/10 – While the video voyeur storyline is compelling, what exactly was the point of the Barchie misdirection?

*Y’all know who answered this question on the show?