What was your first pro wrestling show?

Even if you never watched a minute of WWE, WWF, WCW, ECW, or anything of the sort, you knew who Hulk Hogan was. You knew Macho Man. Depending on the era, you knew Stone Cold and the Rock. You knew of Sting and Goldberg. Those guys are the Mickey Mouses of wrestling. They’re the Michael Jordans. They’re the guys everyone knows even if you don’t watch.

But if you’re reading this you watch.

So…what was your first show? Who was the first wrestler that captured your attention?

For me, it was the Smackdown before No Mercy 1999. It was a go-home show, with a hot crowd, some fun nonsense action, good mic work by Stone Cold, shenanigans with Mick Foley and The Rock, and an all-around fun time. I only started watching because it had been an “in” thing in my high school years for a couple of years and I finally decided to jump on the bandwagon. Nothing on the show really captured my attention enough to keep me particularly engaged and I probably wouldn’t have become a regular watcher had it not been for a quick teaser for a wrestler that was soon to debut. 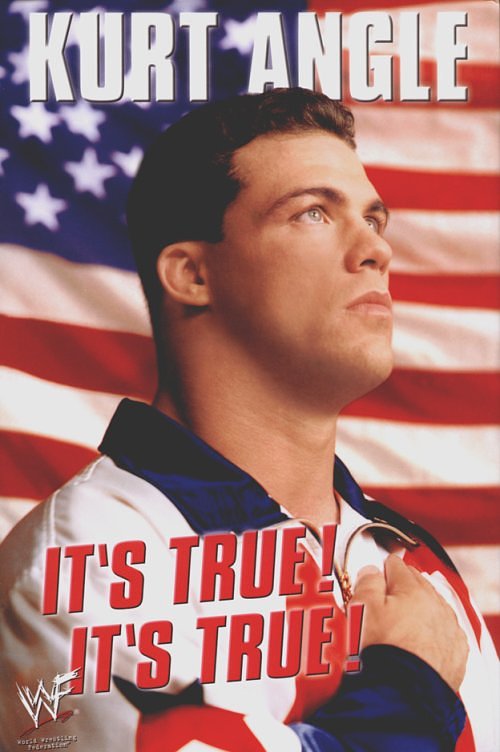 The stigma of “wrestling is fake” was still around in the late ’90s. I mean, it’s still “fake” and always has been “fake” if by “fake” you mean “they’re actor-athletes.” But in 1999 I didn’t get that. I knew it wasn’t real, of course, but I hadn’t come to understand how to view it as “performance art” (extremely hokey, sometimes embarrassing performance art). Kurt Angle was being promoted as “the first real athlete in the WWF.” That intrigued me and kept me watching to see his debut. One month later, at Survivor Series, he did.

Today, twenty years later, Kurt is rightly regarded as one of the best ever to do it. In 1999 however, he was very green in the ring. What he did have, however, was the it-factor on the mic. This was the era where performers were not given pages upon pages of scripts to memorize. They had bullet points to hit and were thrown out to sink or swim.

There are guys and gals who’ve been in the business for twenty years and still can’t cut a promo to save their lives. Kurt Angle was money from day one. It made him an instant superstar and kept him over while he honed his in-ring skills. From the moment he debuted, Kurt Angle was my favorite. Twenty years later, he still is.

Wrestling has changed a ton in the past twenty years. When Kurt debuted, the WWF was climbing higher and higher and WCW was in a freefall from which they would never recover. Today AEW has arrived to give the World Wrestling Empire it’s first major challenge since WCW folded. If I stopped watching wrestling today (and I watch a lot less than I used to), I think I would be walking away at a very poetic, book-ending sort of moment. Vince has competition again, Kurt’s career has recently, officially, come to an end. It’s full-circle for me. I’m not walking away, of course. There’s too much to write about, now more than ever in the past two decades.

Still, I’m feeling nostalgic, so here are some quick reflections on twenty years of wrestling fandom…

VINCE CAN MAKE STARS ALL DAY LONG, BUT HE CAN’T MAKE A SUPERSTAR 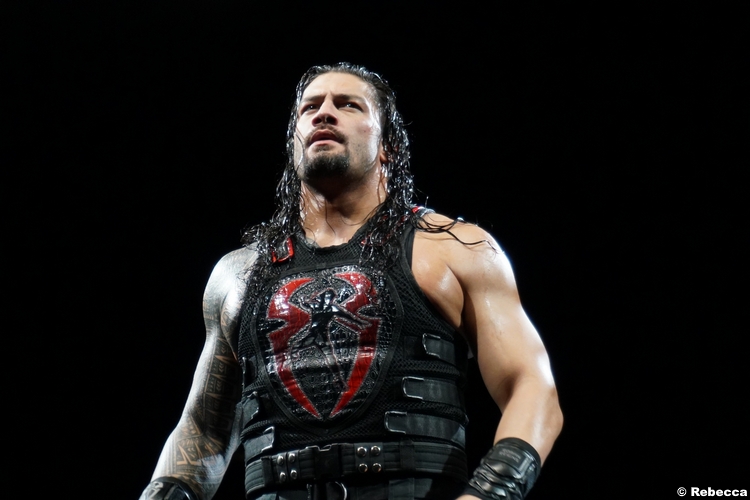 For as much grief as VKM gets, much of it rightly, the man is not Al Davis…yet. He hasn’t reached that black hole of suck where he fails and fails and knows he’s failing but doesn’t know how to escape the failure. Vince is woefully out of touch, yes, but he’s not entirely out of it, yet. He can still make stars. Right now a fat guy doing the worm is one of the hottest segments on Raw each week. A few years ago people couldn’t shut up about Damian Mizdow. Before that, Santino with a green sockpuppet was the hottest thing on the show. Rikishi and Too Cool were the hot thing when I was first watching. Those are midcard acts. They are flashes in the pan of popularity and will never draw a dime to any show. But they will move merch and will give the crowd a thirty-second smile on their faces.

Vince can do that as effortlessly as you or I can take a dump at work.

What he can’t do is manufacture the next Steve Austin, or the next Rock, or the next Hulk Hogan, etc. He can try, and boy does he try. He can also cut the legs off of a potential one, but whenever he sets the full marketing and creative weight of his company behind turning a talent into a top-tier guy, he fails. In the twenty years I’ve been watching, most of that time has been spent on him trying to make the next Rock. John Cena filled the role as best as possible, but he was no Rock. Roman Reigns was tried (and tried again and again) but it never happened. Seth Rollins isn’t breaking through into the collective consciousness of the culture.

These have been twenty years of stars, even one or two big stars during their heyday, but no bonafide superstar.

THE IN-RING WORK HAS NEVER BEEN BETTER…OR MORE SAMEY 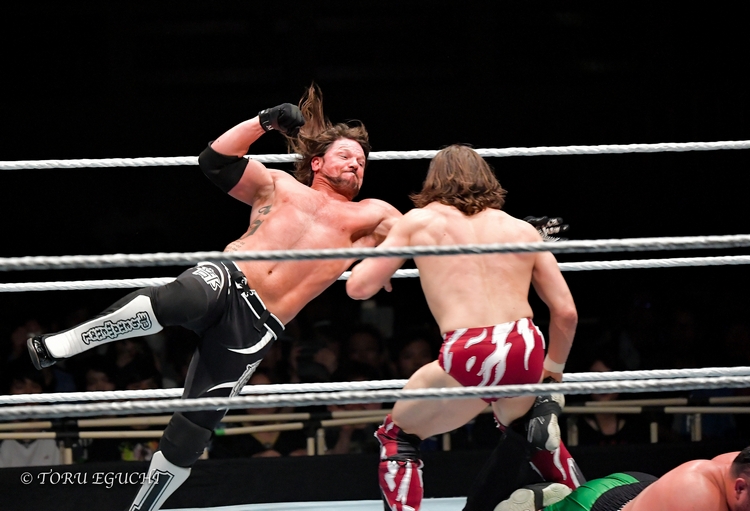 In the Attitude Era there were a few amazing talents who could wow you with their athleticism, but there weren’t very many. The Hardyz were eye-grabbers. Kane could do that top rope clothesline dive. There wasn’t much to be blown away by, especially in the upper and main-event level. In the twenty years I’ve been watching, talents have become more and more athletic. Shawn Michaels was on a different planet from 2002-2010. Shelton Benjamin was a former gold standard in that regard.

Brock Lesnar did things no man his size should be able to.

Today the typical top-level talent is much, much smaller, which means everyone is doing suicide dives, slingblades, moonsaults, top rope Spanish flys, etc. A move that would have stolen the show twenty years ago now happens twenty times a night. After a while (and I think we’re already there) a lot of the wow factor simply goes away. 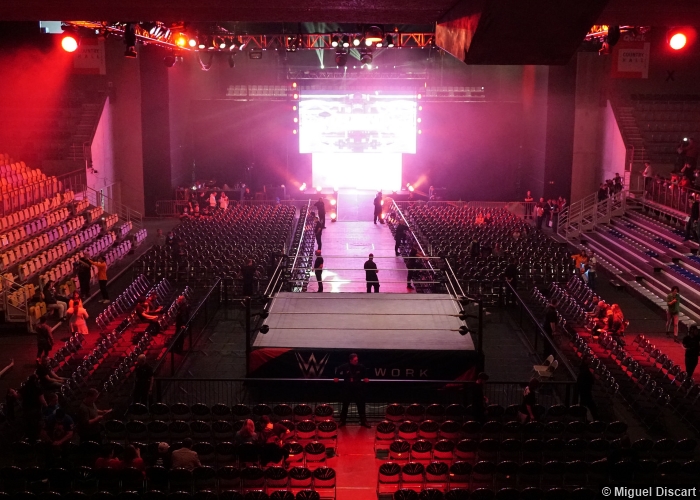 Enough has been written about the move to three hours for Raw. There have been “Nitro” jokes. There have been “bedtime for old people” jokes. There have been comments about “too much of an already mediocre thing” and on and on. The fact is, no one in WWE’s brain trust is unaware of these things. They know every single thing wrong with a three hour Raw and they simply don’t care. They know the crowds are dead by the third hour, having already sat through an hour-long preshow. They know modern viewers don’t have the patience or the interest to devote three hours every Monday night to wrestling. What used to be a hot, fun, anything can happen couple of hours, has now become a meandering, repetitive show where either nothing of consequence happens, or whatever happens that is consequential is either forgotten soon after or is so randomly thrown out there it has no weight to it.

Which means there’s no reason to care about watching.

WWE knows all this, but they don’t care because USA is paying a lot of money for a three hour RAW, and the money they’re making outweighs the need to retain big viewer numbers. So, because of everything previously said, people just aren’t tuning in and aren’t turning out. The show has world-class athleticism, but with a run-time longer than The Godfather. It has a ton of fun acts but no genuinely must-see performers. And, most damning of all, Raw is bleeding viewers and attendees, in my expert opinion, because Kurt Angle isn’t running around every week putting on barnburner matches and side-splitting segments.