And so once again I grace you’re computer screens to retrospectively review an old wrestling autobiography that seems to have largely fallen into obscurity with wrestling fans. This pick is “It’s True, It’s True!” by none other than Kurt Angle, everyone’s favourite American hero/braggart. On paper this sounded like a great read – Kurt Angle has certainly had a stellar life. He rose to the top of the athletic world with a Gold Medal at the 1996 Olympics and then rose to the top of the professional wrestling world by becoming one of the most hated heels of the new Millennium. Surely someone who’s done so much must have a thousand interesting stories that they could put into their autobiography? 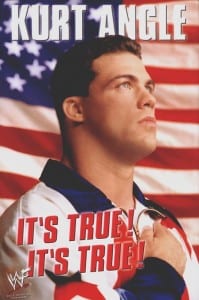 First off, Kurt Angle’s autobiography is befouled by the same problem that damaged The Hardy’s and Edge’s respective autobiographies. “It’s True! It’s True!” is written way too early in Kurt Angle’s life. But this shouldn’t have been a problem for Angle at all in the slightest. Chris Jericho proved that you can write a decent autobiography at an early age if you structure the point of the book (i.e. chasing/attaining a dream) correctly. Angle attempts this, but his shortcomings as a writer make it impossible to care about his life in the slightest. Having a ghost writer didn’t seem to help either. But surely a man like Kurt Angle who has done so much should have loads to talk about. Well not really – for the majority of his life Kurt’s either played sports or trained, and that’s all he talks about. The key moments of interest are when he is talking about his wrestling tournaments or his travels overseas but they are lost in a sea of him talking about mundane stuff like training or trying to find sponsors.

I wasn’t a huge fan of Kurt Angle’s before I read this and to be honest I’m even less fond of him now. You know how on TV he used to play a nerdy athlete who was in love with himself? Well what I got from this autobiography is that he’s pretty much like that in real life. I’ve always found that the mark of a great autobiography is if that the author can write it in such a way that it’s almost like the author is talking to the reader. In Kurt Angle’s book it’s more like he’s just arrogantly trying to brag to you that he’s great. He keeps reminding you that he was awesome in any sport he played, awesome in wrestling, awesome in his training to be a professional wrestler, and awesome in his rise through the ranks of the WWF. And then just when you think he’s done bragging about his accomplishments, he brags about how great he was during his first reign as WWF Champion. It also doesn’t help that Kurt Angle marks himself out as a completely unlikeable person; he’s a braggart in real life and a huge cry baby.  That pretty much sums up his autobiography – he’s either bragging about something or crying about something.

Well alright, let’s try to be fair to Angle. At times he’s faced some real sad events in his life, like the untimely death of his dad or the murder of his wrestling trainer Dave Shultz. But his dad is presented as a drunk and it’s hard to take Kurt’s feelings about him seriously when at the same time he goes on about how his dad did nothing but drink or beat Angle and his brothers when they got out of line. His wrestling trainer’s murder is probably the one moment where Angle acts like a regular human being and actually is able to garner some sympathy.

Another problem I have with is Angle’s American pride. Loving your country is all very well and good but Kurt Angle goes the extra step and declares his undying love for America and it’s superiority over other countries. He makes a point of telling us that every time he comes home from overseas he literally kisses the ground.  Passages like this make me wonder if he wrote this autobiography with kayfabe in mind because unless you are the Pope, this is generally a very strange gesture to actually do.  The title of the book was also a poor choice. I know it’s was Angle’s catchphrase, but it really sounds like he’s trying to convince us that what’s inside the book is true, despite our presumptions.

The nicest observation I can think of is that it’s at least interesting – initially. Despite the problems with the writing I was drawn in enough to see it through his training for the Olympics. I’m always up for a unique read and winning an Olympic gold medal for wrestling before moving onto the world of professional wrestling is about as unique as they get. However this interest quickly fizzles out around the time of his signing with the WWF, which the book quickly turns into a play by play of all his storylines.

So in summary, “It’s True! It’s True!” has a lot of potential killed by terrible writing. I tried to like this book, but the only thing that kept me going was that potential of being a unique read, which wasn’t even handled properly. It’s just littered with flaws and I find it hard to suggest it to anyone. Maybe if you find the book at a discount book store or have some sort of undying love for Kurt Angle you might as well go ahead and read it. If neither of these apply to you, then in my opinion this book is not for you.