Your SO OF COURSE preview of WWE WRESTLEMANIA 35!

Think WWE is in panic mode? How does a PPV with two ladder matches, a cage match, two Becky Lynch matches, and almost every singles title on the line sound? AEW is coming but I don’t think WWE is feeling the heat from that wrestling establishment yet. Right now their biggest enemy is themselves. That’s fitting I suppose, since for years the company has been saying they’re only competing against themselves.

Raw’s ratings are in the toilet, SmackDown’s are just as bad. The company is raking in money hand over fist but are bleeding viewers just as rapidly. It feels like an unsustainable business model. To me, it feels like the dot.com bubble, when a bunch of tech startups were making stupid money from investors without any sort of sustainable revenue stream. Eventually the bubble burst.  If WWE wants to avoid something like that they’re going to have to take a look in the mirror and decide what big changes they’re willing to make; right now they’re only making little ones.

In the meantime, THIS is your SO OF COURSE preview of WWE MONEY IN THE BANK BUT FOR HOW LONG 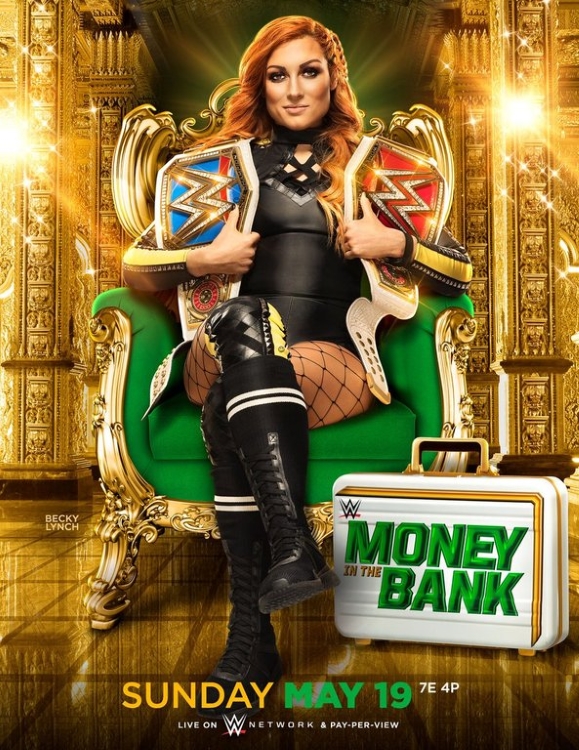 At least the poster’s great.

As previously mentioned this card is loaded. That, plus a generous helping of apathy stew means a light preview this month. Maybe things’ll turn around next month when the company heads to…

WOMEN’S MONEY IN THE BANK

What it is? It is stacked. Natalya vs. Dana Brooke vs. Naomi vs. Alexa Bliss vs. Bayley vs. Mandy Rose vs. Ember Moon vs. Carmella. There’s a favorite (Ember), a darkhorse (Mandy), a former winner with cred (Carmella), a trio of former champs with cred (Alexa, Naomi, Bayley) and Dana Brooke. I think, of the four former champs the only one I can see winning is Naomi, since Bayley is still at the bottom of the barrel, Alexa doesn’t need it, and Carmella already won it. I know I called Mandy Rose a darkhorse, but she’s more like a 1A favorite. If there’s a dark horse it’s Dana Brooke, but she seems more like the type to disappear for the majority of the match and make everyone forget she was in it.

Importance level out of 8 (1 being the highest)? = 6/8 – It’s hard to get too jazzed about the match since there are so many who are either unlikely to win or who wouldn’t be very exciting winners.

Who should win? Ember Moon is the closest thing to an uncrowned superstar on the roster. Do it.

Who should win? Joe. Rey’s the vet putting over talent and even though Joe isn’t a rookie he needs it more.

Importance level out of 8 (1 being the highest)? = 4/8 – It’s still the most prestigious title out there but I don’t see this one coming close to the main-event. That said, the crowd should be hot, the action should be fun, and the finish should be interesting.

Who should win? Kofi if you want to have a long reign until SummerSlam; Kevin if you want to play hot potato with the title in a bid to find a ratings spark.

What it is? It’s Becky Lynch vs Charlotte. Again.

Importance level out of 8 (1 being the highest)? = 5/8 – Lacy Evans has come on strong recently and has supplanted Charlotte as the Becky Lynch opponent to watch this Sunday. Maybe it’s just because I’ve seen Becky and Charlotte enough that there’s not much they can do right now that will surprise me. I expect Becky to retain unless there’s one of those “night-of” MITB cash-ins. That’d be the easiest way to get one of Becky’s two titles off of her, though I hope they let her run with both for a while longer.

Who should win? Becky, but all bets are off if there’s a MITB cash-in.

Importance level out of 8 (1 being the highest)? = 3/8 – Becky’s not main-eventing this one but that being said, good for Evans for powering through the initial displeasure at her being the pick for Becky’s first challenger. She turned what looked to be a one-note New Generation-esque gimmick into something more and now I’m legit excited to see what she’s got in a real PPV title match.

Who should win? Becky. Lacey has a long road ahead of her but a strong showing will go a long way. Despite floundering ratings, now is not the time to abandon everything, and Becky Lynch is still one of the hottest acts on the show. Smackdown can maybe try someone else but Raw needs Becky Lynch on top.

MEN’S MONEY IN THE BANK

What it is? It is the spring-time Royal Rumble, featuring Sami Zayn vs. Ricochet vs. Drew McIntyre vs. Baron Corbin vs. Ali vs. Finn Bálor vs. Andrade vs. Randy Orton. Literally everyone except for Randy Orton is a favorite here and only he and Baron Corbin would be a disappointment.

Importance level out of 8 (1 being the highest)? = 2/8 – It’s the namesake match of the show; it’s important. The only reason it’s not on last is because they’ll want the intrigue of a potential cash-in during the main-event.

Who should win? Sami Zayn would be a surprise but would probably be wasted. Ricochet would be fun but I have no faith in Vince to book him properly as a main-eventer. Drew is the odds-on favorite, though he shouldn’t need the briefcase since he’s so big and imposing. It feels like overkill. Ali is the next Rey Mysterio but he needs another decade of toiling in the midcard before he gets the golden push. Finn Bálor will forever be a bridesmaid. Andrade has money written all over him but see Ricochet for my hopes for him as a main-eventer.

What it is? It is AJ Styles vs Seth Rollins, a true main-event caliber match in the main-event of the company’s biggest PPV between Mania and SummerSlam.

Importance level out of 8 (1 being the highest)? = 1/8 – For reasons already stated, it’s a match worth spending $9.99 on. If you’re one of those fans who basically stopped watching Raw and SmackDown and just plan on watching the PPVs and NXT shows (and judging by the ratings that’s…most of you) then this is worth your sub.

Who should win? Seth needs a run to establish himself as the post-Brock champ. AJ has been a champ for a long time in his short WWE tenure. It doesn’t feel right for him to win the big one on Raw just yet.