The Elvis On Tour movie was in many ways a sequel to 1970s That’s the Way it Is, albeit with one significant change. That’s the Way it Is focused almost equally on Elvis and his fans, with the throngs of spectators telling of their love for the performer intermixed with Elvis’s onstage talent. Elvis On Tour mostly leaves out the crowd and offers an inside look in Elvis’s behind the scenes life. Director Robert Abel told the man to be real and honest in his interview portions, and that if he ever sensed that Presley was “putting on an act” he would shut the cameras off. Elvis appreciated the candor and gave Abel more access than many of his posse would have expected. The movie is most famous for its various split-screen shots, showing Elvis and the crowd from multiple camera angles simultaneously. It is a technique that will be featured again in Elvis’s 1973 Aloha from Hawaii concert. The technique was actually first adopted (in a music-concert setting at least) in the 1970 documentary “Woodstock.” One of the editors who put that film together was Martin Scorsese, who also worked on this film, compiling the various montage sequences.

Unfortunately, the Elvis on display in the movie is not at all the same man seen in That’s the Way it Is. That Elvis was lean and tan and energized almost to the point of being manic. This Elvis was bloated. He wasn’t fat by any means, but there was a general puffiness to him, especially his face and neck. There was a pale, blotchiness to his skin tone, and his speech was far more slurred—drug-addled—that it had been in the 1970 film. This Elvis still occasionally exploded with excitement, but overall he was more subdued, restrained, diminished. The difference may not have been noticed at the moment, but when comparing the two the difference is clear. 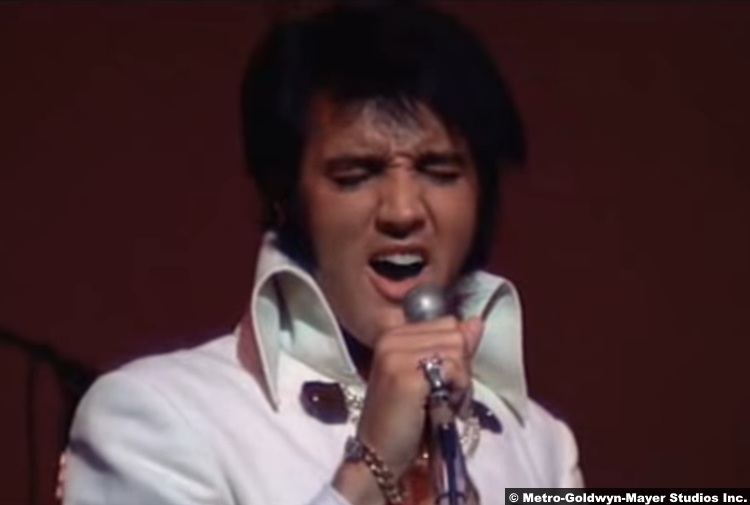 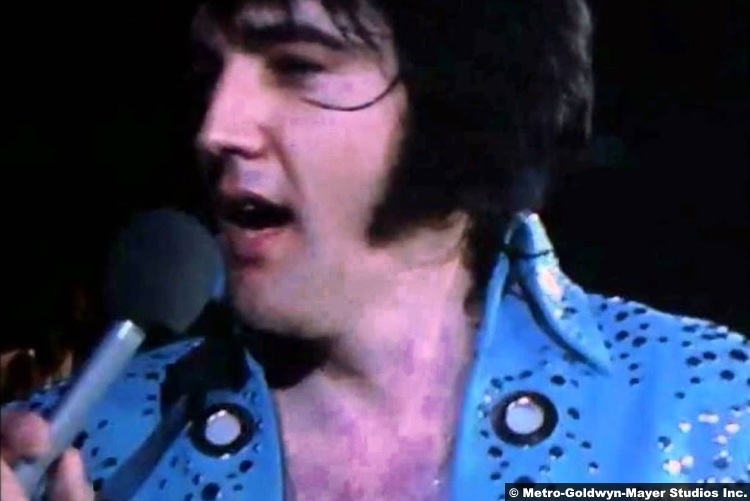 His outfits were different too. Gone are the simple white suits designed to allow freedom of movement, and in its place were outfits of blue, red and black, decked out with rhinestones in starburst patterns, and adorned with a literal cape in the back. He went from looking like a Karate instructor-meets-Napoleon, to looking like a space traveler from planet disco.

His song selection on tour mostly mirrored his recent Vegas run, albeit with a few new numbers snuck in. “Burning Love” was tried out in a few cities, although Elvis struggled with the lyrics and had to rely on holding a sheet during the song. That ruined the energy enough that by the end of the tour the song was almost entirely scrapped.

Despite the occasional hiccups in the performances, it still has to be admired that Elvis performed close to thirty songs per show, for an hour or more every time, without auto-tune, without dubbing, without any of the modern crutches that many performers today use. It was just him and a band playing in real-time, working off of memory a set-list comprised of thirty-years of music in a variety of styles. It was a staggering accomplishment.

“I’ll Remember You” was pulled out of the obscure late-60’s vault and brought back on the tour. It would be more famously-performed at the Aloha from Hawaii concert, but he used it in 1972 as a song near the end of his concerts.

In terms of older material, there was plenty for 50’s fans to enjoy. Elvis often lumped his early work together and performed them in quick succession near the beginning of the show, after the initial big opening numbers were ended. The most distinctive thing about the way the oldies were handled is the speed with which they were delivered. Elvis blazed through songs like “Heartbreak Hotel,” “All Shook Up” and even his personal favorite “Love Me,” and usually only performed half the verses, as though he didn’t want to waste too much time on them and instead get back to the big bravado numbers. The insecure singer always seemed, not ashamed of his old work, but more presumptuous that no one would want to hear the old songs anymore. That was incorrect; the crowd regularly went into fits of madness when their old favorites were played.

Filming for Elvis On Tour was wrapped up in April, and was set for a November release. When it hit theaters it became an even bigger hit than That’s the Way it Is, and would go on to win the Golden Globe for best documentary film. Despite the high-budget (for a documentary) of 1.5 million dollars, the film recouped its costs after just three days in theaters…which is good because one million of that 1.5 went to Elvis himself! With his tour ended in April, there were two months to go before the big enchilada:

Despite sell-out crowds everywhere he went, despite standing ovations at the end of every show, despite rave reviews from press and fans and even just curious onlookers caught up in the spectacle of “The King coming to town,” Elvis approached his upcoming MSG concerts with crippling anxiety. It was in that city where Elvis met his first taste of national super-stardom, appearing on the Ed Sullivan show in September of 1956. It was also in that city where Elvis experienced his first career setback, being paraded around Steve Allen’s set in a tuxedo. The New York City press had been his harshest critics when he first burst onto the scene, bringing a hybrid of country bumpkin music and black rhythm and blues; it was a marriage of two styles neither of which were liked in that region. Fast forward almost twenty years, and despite having achieved global popularity, Elvis still saw himself as a country boy with a country twang. He worried, not only that the New Yorkers still might not like his music, but that they might not even show up for the events!

In what would become a trend for the next several years, Elvis went into overdrive to get in shape for the concert. He arrived at the New York Hilton Hotel a few days before opening night looking leaner and tanner than he had since 1970. Gathering with his band, he insisted on rehearsing several new songs in order to give the New York crowd something unique. Numbers like “Fever” and “Any Day Now” as well as “Faded Love” and “I Really Don’t Want to Know” were attempted but in the end, Elvis scrapped almost all of them, nervous about being able to remember his lines (which is why “Burning Love” missed the cut).

When Colonel Parker’s offer for an exclusive interview met zero takers (due to the $120,000 price tag the greedy manager attached to it), plans changed to host a press conference on the afternoon before the first show. It was Elvis’s first presser since 1969 and only his second since his return from the Army in 1960. Elvis walked into the room, amidst the pop of flashbulbs, wearing a powder blue two-piece suit and a million-dollar smile. For all his pre-show nerves, he looked happy and ready to go.

The interview had several memorable moments (it’s on Youtube). One person asked about Priscilla and Elvis’s boyish grin fades for half a second before he casually says she wasn’t in New York and wouldn’t make the show. Another question was asked about Vietnam protestors and Elvis quickly stated that he didn’t feel comfortable sharing his political opinions in such a forum. He said that as an entertainer he should just entertain everyone and not dabble in such matters in public. When pressed if he was saying all entertainers must do like him, Elvis again deftly sidestepped and just said he was speaking for himself. For a so-called “country bumpkin” he handled the media with more skill and savvy than many world leaders. The highlight of the interview came when Elvis was asked about his reputation as a “shy, humble, country boy.” It took one and a half seconds for Elvis to whip up a response, but he quickly leapt to his feet and flashed his massive gold belt buckle, etched with the words “Las Vegas Attendance World Champion” and said “well I dunno what makes them think that…” to a roar of laughter and applause…from the New York press.

They were eating out of the palm of his hands.

He wore a different outfit at each show, none as gaudy as he’d used on tour months previously. On Friday he wore a white suit with gold trim and cape, large golden studs dotting either side of the wide opening in the front and of course, his Las Vegas championship belt. Saturday’s afternoon show featured a lightning-blue outfit and matching cape with subtle golden flourishes across the front, arms and legs. He also had a thick white belt with chains dangling from either side of the buckle. That evening, he wore a white suit similar to Friday’s, only this one had more rhinestones in starburst formations around the arms. Finally, on Sunday, his final show featured almost the same outfit as on Friday except the highlights were red instead of gold and the large red studs were more numerous, running down his arms, sides and legs. No matter what he wore, he looked and sounded better than he had all year long.

He serenaded the crowd with ballads like “You’ve Lost that Loving Feeling,” got into a bluesy groove with “Reconsider Baby,” and rocked the house with “Suspicious Minds” Toward the end of the show, after introducing his band, he called for the house lights to be turned on, saying “now that you’ve seen us, we’d like to see you.” And then segued perfectly into the “well hello there” opening line of “Funny How Time Slips Away.” The show ended with the customary “Can’t Help Falling in Love,” followed up a final kneel to the audience, and an escape through the back door before any waiting fans could find him. He was halfway to the hotel before the announcer declared “Elvis has left the building.”

Although the shows were not professionally taped (super-8 and 16-millimeter videos can be found online, however) RCA did record two of the four shows for album release, and after the instant-success of the event, quickly rushed the Saturday evening concert (actually the weakest of the four) to record stores. Colonel Parker actually had the recording sped up so that the whole hour-long show could be crammed into one LP (to ensure maximum publishing royalties). The New York Press, and everyone else, hailed the four-day engagement as a landmark concert event. The New York Times described Elvis as a “prince from another planet” come down to earth.

His biggest show to date was finally behind him. Other than an August series in Las Vegas (which in the shadow of Madison Square Garden was perfunctory), Elvis’s year was done. 1972 had been a rocky one, with a crumbling home life on the one side and a career highlight on the other. He was still only separated from Priscilla, but a 1973 divorce loomed over the horizon, as did another concert Colonel Parker was working on.

It would be an even bigger mountain than the one Elvis had just climbed.