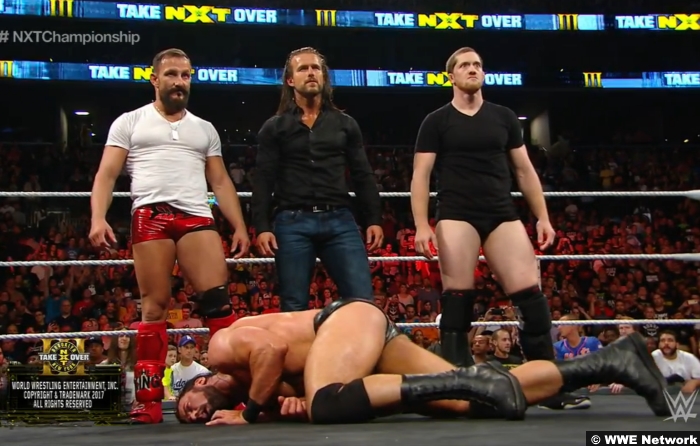 NXT TakeOver Brooklyn III came to you, live on the WWE Network, from the Barclays Center in Brooklyn, NY. Five matches were scheduled for the event including three championship matches as Bobby Roode (c) would defend the NXT Championship against Drew McIntyre, record-breaking champion Asuka (c) would defend the NXT Women’s Title against Ember Moon, and The Authors of Pain (c) would put the NXT Tag Team Titles on the line against SAnitY. Plus, Johnny Gargano vs. Andrade “Cien” Almas and Aleister Black vs. Hideo Itami would take place. NXT TakeOver III Brooklyn would also feature special appearances from former NXT Superstars including Sasha Banks, Bayley, Becky Lynch, Finn Balor, Sami Zayn, and Shinsuke Nakamura.

After the NXT Championship match, Bobby Fish & Kyle O’Reilly would get on the ring apron, distracting new NXT Champion Drew McIntyre before the debuting Adam Cole attacks McIntyre from behind, leading to a three-on-one beat down from the three men. Cole then admires the NXT Title before tossing it aside as the new contingent of Adam Cole, Bobby Fish, & Kyle O’Reilly stand over Drew McIntyre.

Prior to the NXT Tag Team Title match, a brawl would break out between the two teams. After the match begins, Eric Young would get on the ring apron to replace Killian Dain for SAnitY. Since Killian Dain was never officially tagged into the match, it was within the rules for Eric Young to be Alexander Wolfe’s tag team partner for the match. Later on in the match, with the legal participants on the outside, SAnitY’s Nikki Cross would get in the ring, getting in the face of Paul Ellering. With the referee distracted by Ellering, Nikki would dive to the outside onto Akam and Akam would catch Nikki before Killian Dain charges at Akam, sacrificing Nikki Cross as Nikki is squashed between Killian and Akam as Killian puts Akam through a table at ringside. After the match, the celebration would be crashed by Bobby Fish & Kyle O’Reilly, who attack both SAnitY and The Authors of Pain before holding up the NXT Tag Team Titles, staking their claim to a future NXT Tag Team Title match.

What did you think of NXT TakeOver Brooklyn III? Post your comments in the box below.