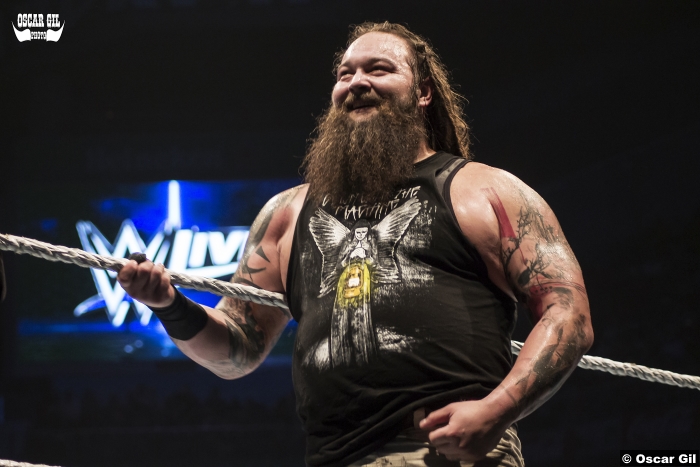 After having to be helped to the back during the Men’s Traditional 5-on-5 Survivor Series Elimination Tag Match after not only driving Braun Strowman through the announce table with an awe-inspiring elbow drop, but getting blasted with a vicious Spear out of mid-air by Roman Reigns, SmackDown LIVE would kick off with SmackDown Commissioner Shane McMahon gingerly making his way to the ring, clearly feeling the effects of the match at Survivor Series. Shane says that, after Survivor Series, he feels like he’s been in a “car accident” before giving a shout-out to Team RAW. Shane then says that Roman Reigns nearly separated him from his shoes on Sunday before saying that he needs to thank two Superstars who he thought he would have the most trouble with but ended up being the sole survivors for Team SmackDown LIVE, Bray Wyatt & Randy Orton. The Commissioner continues, saying that he asked WWE World Champion AJ Styles and Dean Ambrose to put their differences aside for just one night at Survivor Series, but they did not listen to him.

This brings out the man who will challenge AJ Styles for the WWE World Title in a Tables, Ladders, & Chairs Match at WWE TLC in just under two weeks, “The Lunatic Fringe” Dean Ambrose. Ambrose says that Team SmackDown LIVE won at Survivor Series, saying that there’s nothing to “complain about”. Shane McMahon tells Dean Ambrose that, when Ambrose decided to have a brief reunion with his former Shield teammates and RAW Superstars Seth Rollins and Roman Reigns to put AJ Styles through the announce table at Survivor Series, Ambrose didn’t know that the elimination of the WWE World Champion wasn’t going to cost Team SmackDown LIVE the match. Dean Ambrose quickly changes the subject, introducing the team mascot of Team SmackDown LIVE James Ellsworth. Ellsworth comes out wearing a neck brace after being hurled off of the stage through a table by Braun Strowman after ensuring Braun was counted out at Survivor Series. Ambrose then reveals that Shane has a “surprise” for Ellsworth with the Commissioner telling Dean that he was going to wait to give Ellsworth his surprise in private.

However, before Shane could break the news himself, Dean Ambrose blurts out that James Ellsworth is getting a SmackDown LIVE contract! The Commissioner confirms this news, saying that because of Ellsworth’s “tenacity” and his dedicated to SmackDown LIVE, he is honored to offer James a SmackDown LIVE contract. Shane then turns his attention to Dean Ambrose, saying that Ambrose has been so “out of control” lately that he’s giving Ambrose the night off. Ambrose then says that he and Ellsworth are going to go out and celebrate before Shane adds that he needs Dean Ambrose to leave the building and he needs him to do it now! Despite the protests of the fans, Dean Ambrose willingly leaves the ring, walking past WWE World Champion AJ Styles on his way out of the arena.

However, James says that he doesn’t have a problem facing AJ Styles in a Ladder Match with his contract on the line, bringing up that he’s already beaten AJ Styles twice in the past. Ellsworth then says that, if he wins, he not only wants a full-time contract on SmackDown LIVE, he wants a future shot at the WWE World Championship! Shane asks James if he’s sure about his decision and Ellsworth says that he “wants it all or nothing at all”! With that, the Commissioner makes the match official as James Ellsworth will face WWE World Champion AJ Styles in a Ladder Match with James’ contract and a future title shot at stake!

After Baron Corbin’s involvement cost him and SmackDown LIVE the Cruiserweight Championship and the entire Cruiserweight Division at Survivor Series, Kalisto would get another shot at gold on SmackDown LIVE as the masked high-flyer would challenge The Miz, with Maryse in his corner, for the Intercontinental Championship in the opening match of the night. During the match, Kalisto looked to be moments away from winning the Intercontinental Title, but that is when Baron Corbin would get on the ring apron. Even though Kalisto would knock Corbin off of the ring apron, the distraction would be enough for The Miz to capitalize, scoring with the Skull Crushing Finale, pinning Kalisto to successfully retain the Intercontinental Title. After the match, Baron Corbin would prey on the helpless Kalisto, planting the high-flyer with the End of Days in the middle of the ring as The Miz and Maryse look on approvingly from the stage. However, this is when the former champion, Dolph Ziggler, would appear behind The Miz, waiting for the Intercontinental Champion to turn around before leveling The Miz with the super kick, leaving The Miz laid out on the stage!

Backstage, SmackDown Commissioner Shane McMahon is in the middle of an argument between SmackDown Women’s Champion Becky Lynch and Alexa Bliss with the champion revealing that Bliss will get a rematch for the SmackDown Women’s Title at WWE TLC. This is when Natalya would interrupt, blaming Becky Lynch for the loss to Team RAW at Survivor Series, accusing Becky of being pre-occupied over potentially losing her title to Alexa at WWE TLC. Shane then comments that, had the captain of Team SmackDown LIVE, Nikki Bella, not been attacked backstage at Survivor Series, then the SmackDown LIVE women’s team might have won at Survivor Series. Shane then decides to put Natalya in a match against Becky Lynch. This is when that, despite being kicked out of the arena by Shane, Dean Ambrose enters Shane’s office eating a pizza, putting a slice of pizza in Shane’s hand before Shane again tells Ambrose to leave.

Backstage, SmackDown General Manager Daniel Bryan confronts Baron Corbin, telling Corbin that what he’s doing is “reckless”, saying that Corbin isn’t seeing the “big picture”. Baron insists that he is the “big picture” but Daniel says that Corbin cost SmackDown LIVE the entire Cruiserweight Division at Survivor Series and he interfered in the Intercontinental Title match all because of a “grudge”. The GM then says that “actions have consequences”, putting Baron Corbin in a match against Kane!

Backstage, SmackDown Commissioner Shane McMahon is incensed to once again find Dean Ambrose standing in his office, this time dressed up as The Mountie. However, Daniel Bryan is able to keep Shane calm, convincing the Commissioner to take some time off and let him handle things. Ambrose then tells Daniel to deliver a message to AJ Styles for him, saying “The Mountie always gets his man”.

Backstage, The Miz and Maryse confront Daniel Bryan as The Miz demands that Dolph Ziggler be suspended for hitting him with the super kick earlier. Daniel reminds The Miz that Dolph Ziggler is still owed a rematch for the Intercontinental Champion, revealing that the rematch will take place at WWE TLC. The GM then says that, after WWE TLC, The Miz and Dolph will go their separate ways before adding that the Intercontinental Title will be on the line in a Ladder Match! The Miz then vows to write the “final chapter” in the rivalry with Dolph Ziggler at WWE TLC.

Backstage, Nikki Bella confronts Carmella in the locker room, accusing Carmella of attacking her from behind at Survivor Series, blaming Carmella for the team losing. Carmella argues that, when she attacks Nikki, she always takes credit for it, saying that she didn’t attack her. Carmella then suggests that maybe RAW Women’s Champion Charlotte or her protégé Dana Brooke or “half the staff at the E! Network” took her out. Carmella then says that Nikki’s “man” is all about “hustle, loyalty, and respect” but Nikki is “no Mother Theresa”. Nikki admits that she’s not a saint, saying that, whether Carmella attacked her or not, they are going to settle things at WWE TLC when they go one-on-one in a No Disqualification match!

As punishment for his interference at Survivor Series and earlier in the night, both times costing Kalisto a championship match, Baron Corbin’s punishment would be carried out on SmackDown LIVE as “The Lone Wolf” would go one-on-one with “The Big Red Monster” Kane. During the match, Kalisto would come out with revenge in mind as Kalisto would hit Baron Corbin with a dropkick and a series of kicks. Kalisto then quickly exits the ring as Kane catches Baron Corbin, planting Corbin with the chokeslam. Kane then exits the ring before Kalisto decides to grab a steel chair, but Baron Corbin is narrowly able to escape the ring. However, Baron Corbin would decide to take a run at Kalisto and Kalisto would respond by hitting “The Lone Wolf” with the Van Daminator, kicking the chair into the face of Baron Corbin! Corbin then exits the ring as Kalisto stands tall with chair in hand, ready to continue the fight.

This is when Dean Ambrose would come to the rescue of James Ellsworth, brawling with AJ Styles before sending the champion face-first into the ladder and tossing Styles out of the ring. “The Lunatic Fringe” then tries to get Ellsworth back to his feet, but AJ Styles springs off of the top rope, taking Ambrose out with the Phenomenal Forearm. Styles then climbs the ladder, but James Ellsworth then makes the move of his career, pushing the ladder over, sending AJ careening to the outside. Just as Ellsworth is about to climb the ladder, Styles tries to get back in the ring only for James to catch the champion with No Chin Music! As a result of No Chin Music, AJ gets his foot tangled up in the ropes, leaving AJ struggling to get free as James Ellsworth climbs the ladder, successfully retrieving the contract to beat the WWE World Champion for a third time, earning himself a SmackDown LIVE contract as well as a future shot at the WWE World Title! After the match, James Ellsworth has tears in his eyes as he celebrates with Dean Ambrose on the outside as AJ Styles sits in the ring in disbelief.