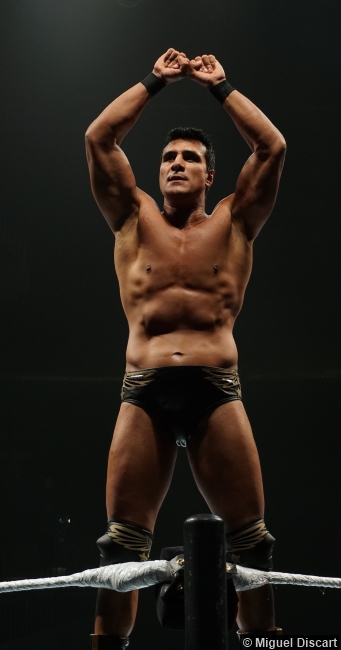 In a move that has been expected for a while now, WWE officially announced on Friday that WWE and Alberto Del Rio (Jose Rodriguez) have come to terms on his release, ending Del Rio’s second stint with the company less than a year after he returned in October of last year. After initially being released in August of 2014 due to a backstage altercation with an employee, the four-time World Champion would return to WWE at WWE Hell in a Cell last October with Zeb Colter as his manager, answering John Cena’s U.S. Open Challenge and beating Cena to win the United States Championship.

However, Del Rio’s career would go downhill from there as his scheduled feud with John Cena would not materialize due to Cena going down with an injury and the “MexAmerica” angle with Del Rio and manager Zeb Colter fell flat and was quickly dropped after a feud with Jack Swagger. Instead of his original feud with John Cena, Del Rio would feud with Kalisto, losing the United States Title to Kalisto on the January 11 episode of RAW only to win the title back three nights later on SmackDown and lose it to Kalisto for a second time at the Royal Rumble. After losing the U.S. Title, Del Rio would be put in The League of Nations stable with Sheamus, King Barrett, & Rusev. After beating The New Day at WrestleMania, The League of Nations was eventually split up and Del Rio would go on to be a part of the Money-in-the-Bank Ladder Match at WWE Money-in-the-Bank but failed to win the briefcase. On July 19, Del Rio was drafted to SmackDown Live in the WWE Draft, but was rarely used on TV. On August 18, Del Rio was suspended for 30 days for his first violation of the WWE Wellness Policy along with his girlfriend, Paige. Del Rio’s final appearance on WWE television was on the August 16 episode of SmackDown Live where he lost to John Cena.

Following his release, Del Rio, now using his independent ring name of Alberto El Patron, would hold a press conference in Mexico City to announce his plans for the future. Following the announcement of his suspension (which Alberto made no mention of during the press conference), several sites had reported that Del Rio had a unique contract with WWE as it was in his contract that the former WWE Champion would be granted his release whenever he asked for it. Alberto revealed during the press conference that he made a deal with Vince McMahon to waive the usual 90-day no compete clause that WWE puts in their contracts, leaving Alberto the rare freedom to work wherever he wants whenever he wants. However, Alberto mentioned during the press conference that he is not looking to sign any exclusive deals for any wrestling company as he is looking to start his own business in Mexico and is looking to retire from wrestling in a couple of years.

Despite reports stating that Alberto was unhappy with how he was being booked in WWE, the former WWE Champion stated, “I do not regret my second stint [in WWE]. They gave me everything I asked, but my decision was not motivated by not having championships; that is irrelevant at this stage of my career.” The former Alberto Del Rio mentioned that he told Vince McMahon that he doesn’t want to lose his passion for wrestling and was upset every time he boarded a plane to go to another city. Alberto also stated that he’s not ruling out another return to WWE in the future.

Alberto’s girlfriend, Paige, who, as of this moment, is still under contract with WWE was present at the press conference but did her best to stay out of the spotlight. It’s currently being reported that Paige, who is serving a 30-day suspension (which is up on September 17) at the moment, has hired a team of lawyers to try and get her out of her contract with WWE. While there are a lot of rumors going around as to why Paige wants to leave WWE, it’s a safe assumption to make that the 24-year old wants to stay close to her boyfriend.

What do you think of Alberto Del Rio’s release? Post your comments in the box below.