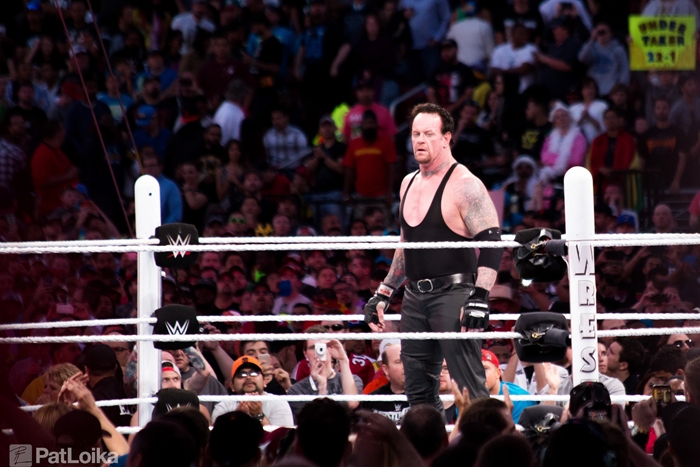 Of all of the dangerous matches in WWE history, there is one match that instills fear in even the most seasoned of veterans and, in its over 18-year history, the Hell in a Cell match has earned its name as the demonic structure has housed some of the most brutal and unforgettable matches in WWE history and the Cell would be looking to claim four more victims as the seventh annual WWE Hell in a Cell came to you, live on the WWE Network, from the Staples Center in Los Angeles, CA. It all started at WrestleMania 30 as, on that fateful night, Brock Lesnar would walk into a match against the man who dominated WWE’s premier event for well over two decades, The Undertaker. On that night, “The Beast” was able to do what the likes of Triple H, Ric Flair, Big Show, Kane, & Shawn Michaels could not do by ending the legendary undefeated WrestleMania streak of The Undertaker. More than a year later, “The Deadman” would rise with his sights set on avenging his WrestleMania loss to Brock Lesnar, costing Lesnar the WWE World Heavyweight Championship and, since then, “The Beast” and “The Phenom” have tried their best to tear each other apart with The Undertaker resorting to some underhanded tactics to defeat Brock Lesnar at SummerSlam. Now, at WWE Hell in a Cell, this bitter rivalry between these two proud warriors would come to a brutal end as The Undertaker would step into his “playground” known as Hell in a Cell for the thirteenth time in his career to square off with “The Beast” who forever altered The Undertaker’s legacy, Brock Lesnar, as both men will be locked inside the demonic structure with no escape and, one way or another, the rivalry between Brock Lesnar and The Undertaker will come to an end inside Hell in a Cell!

While The Undertaker and Brock Lesnar are familiar with the dangers and the brutality of Hell in a Cell, two Superstars will step into the Cell for the first time as Roman Reigns will lock himself inside the structure to do everything in his power to rid himself of Bray Wyatt once and for all. Of the 31 men to step inside Hell in a Cell in their careers, 19 of those men have only competed once inside the structure and Roman Reigns and Bray Wyatt will both be entering their first Hell in a Cell match and, while neither Superstar is a stranger to brutality, they will experience it on a whole new level once they step inside the Cell to end their bitter rivalry that has been rising in ferocity over the last few months. With no way out for either Roman Reigns or Bray Wyatt, who will emerge from Hell in a Cell as the survivor? What lengths will these two Superstars go to in order to destroy their opponent and leave a lasting impression on their careers forever?

While the Hell in a Cell structure would spell the end of two intense rivalries, WWE Hell in a Cell could quite possibly spell the end of Corporate Kane’s tenure as the Director of Operations. Ever since Seth Rollins betrayed his Shield brethren last year in favor of joining forces with The Authority, one Superstar has been a constant in Rollins’ life and that is Kane. Since handing in his mask to The Authority, Kane would don a suit and tie, serving as not only the Director of Operations, but a bodyguard of sorts for Seth Rollins. In this role, Corporate Kane would ensure that Seth Rollins became “Mr. Money-in-the-Bank” last year and, earlier this year at WrestleMania, Rollins would cash in his title opportunity to become the WWE World Heavyweight Champion and, with Rollins’ ego reaching new heights, the champion would verbally abuse the Director of Operations and would even mock Kane after his ankle was shattered by Brock Lesnar. This would all lead to the re-emergence of Demon Kane at Night of Champions as the masked nightmare would target Seth Rollins, leaving the champion laid out in what has become a regular occurrence between the two. However, the unexpected appearance of Demon Kane would be made even more bizarre the next night on RAW when Corporate Kane would return to his duties as Director of Operations, claiming no recollection of attacking Seth Rollins. Since then, the two sides of Kane have been tormenting Rollins both mentally and physically to the point that WWE Principal Owner Stephanie McMahon had to step in with a solution and that solution would come to fruition at WWE Hell in a Cell as Seth Rollins would defend the WWE World Heavyweight Championship against Demon Kane with the added stipulation that, if Demon Kane does not beat Seth Rollins for the title, then Corporate Kane will lose his job as the Director of Operations!

In addition to the WWE World Heavyweight Championship, four championships would be on the line at WWE Hell in a Cell as, for the first time ever, John Cena would bring his U.S. Open Challenge to a live WWE Network event as “The Champ” will put his United States Championship on the line against any Superstar confident enough to try and take the prestigious title from him. In both of their prior title defenses against The Dudley Boyz, The New Day has narrowly escaped with the WWE Tag Team Titles, getting themselves disqualified to keep the gold, but The New Day’s luck may run out at WWE Hell in a Cell when Bubba Ray & D-Von get another shot at the WWE Tag Team Titles. Following a controversial victory at Night of Champions where Kevin Owens raked the eyes of Ryback and rolled up “The Big Guy” to win the Intercontinental Championship, the self-proclaimed “Prizefighter” would have to prove that he is a true champion when he defends the Intercontinental Title against Ryback in a Night of Champions rematch. The Divas Championship would also be on the line at WWE Hell in a Cell as Charlotte would try to get all of the drama involving Paige out of the way so that she can defend the Divas Title for the first time in her career against the former champion who held the title for nearly a full year, Nikki Bella.