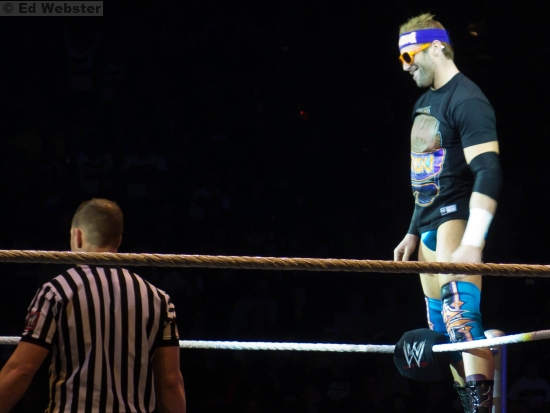 SmackDown kicks off with a rematch from RAW as “The Boss” Sasha Banks would go one-on-one with Charlotte’s protégé Dana Brooke, with Women’s Champion Charlotte in her corner. During the match, Sasha Banks would go for a roll-up on Dana Brooke, but Charlotte would get on the ring apron and “The Boss” would take her focus off of Dana Brooke to knock the Women’s Champion off of the ring apron. However, Dana would fail to capitalize and Sasha would lock in the Bank Statement, making Dana tap out to pick up the win. After the match, there would be no time for celebration as Charlotte blindsides Sasha Banks with a big boot, knocking “The Boss” to the outside before picking Sasha up and tossing her over the announce table! Charlotte then stands on top of the announce table, telling Sasha that “The Boss” will never beat her before Charlotte holds the Women’s Title belt high.

Ten nights before they team up with John Cena to face The Club in a 6-Man Tag match at Battleground, Enzo & Cass would face The Club’s AJ Styles & Karl Anderson, with Luke Gallows in their corner, in tag team action on SmackDown. In the end, a distraction from Luke Gallows would draw Big Cass to the outside as Big Cass takes Gallows out with a big boot before Karl Anderson takes Cass out with a knee to the face. Anderson then hangs Enzo Amore up on the top rope, allowing AJ Styles to lock in the Calf Crusher, making Enzo tap out to pick up the win for AJ Styles & Karl Anderson.

The Miz then says that Darren didn’t so much “win” the battle royal on RAW as it was more like everyone else “lost”. Bob Backlund then says that you have to be a “great role model” to be a “great champion” and The Miz is not a role model, saying they need a “role model” as the Intercontinental Champion. The Miz responds by saying that Bob Backlund looks like “Howdy Doody” and has the wrestling knowledge of “Forrest Gump”. Naturally, Darren Young takes offense to this, getting in The Miz’s face and saying that he’s going to teach The Miz a lesson in “respect” at Battleground when he beats The Miz for the Intercontinental Championship. The Miz then decides to back away from the fight as he and Maryse exit the ring.

Before he defends the WWE Title against Seth Rollins this coming Monday night on RAW, the WWE Champion was in action in the main event as Dean Ambrose would go one-on-one with a familiar rival in Kevin Owens in a non-title match with Seth Rollins a guest on commentary. However, the match would only last a few minutes as, once Dean Ambrose and Kevin Owens take the fight to the outside, the WWE Champion would get in Seth Rollins’ face and, as soon as Ambrose’s back is turned, Rollins attacks Ambrose, ending the match by disqualification. As Rollins and Ambrose brawl in the ring, Sami Zayn rushes to the ring with his sights set on his Battleground opponent Kevin Owens with Ambrose and Zayn getting the better of their respective rivals, leaving the two men standing tall in the ring.

After a brawl broke out moments earlier, ruining the original main event, the new main event would see WWE Champion Dean Ambrose team with Sami Zayn to face the team of Seth Rollins and Kevin Owens. At the end of a wild match, it was Kevin Owens pulling Seth Rollins out of the way of the Helluva Kick from Sami Zayn before Rollins plants Zayn with the Pedigree, pinning Zayn to pick up the win for himself and Kevin Owens. After the match, Kevin Owens would look to powerbomb Sami Zayn on the ring apron, but Dean Ambrose comes to the rescue, taking out Kevin Owens before the WWE Champion sets his sights on Seth Rollins in the ring. Ambrose enters the ring and a brawl breaks out between the two rivals, but when the champion goes for Dirty Deeds, Seth Rollins fights out before retreating from the ring, standing tall alongside Kevin Owens in the entrance way as Ambrose and Sami Zayn stand tall in the ring on the final Thursday night episode of SmackDown.