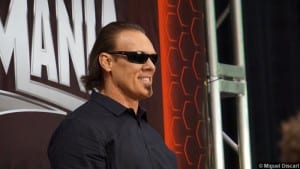 The night before WrestleMania 32, nine legends will take their rightful place in the WWE Hall of Fame at the 2016 WWE Hall of Fame Induction Ceremony, which will air, live, on the WWE Network this Saturday night, April 2, at 9/8c from the American Airlines Center in Dallas, TX. A one-hour special presentation of the WWE Hall of Fame Induction Ceremony will air on the USA Network immediately following SmackDown at 10/9c on April 7. On April 2 in Dallas, “The Icon” Sting, former Intercontinental Champion The Godfather, legendary stable The Fabulous Freebirds, the late great Big Boss Man, the first and only female Cruiserweight Champion in WWE history Jacqueline, and one of the toughest Texan wrestlers of all-time Stan Hansen will all be enshrined in the WWE Hall of Fame. In addition, author, journalist, and breast cancer survivor Joan Lunden will receive the Warrior Award and rapper, actor, and big WWE fan Snoop Dogg will be inducted into the celebrity wing of the WWE Hall of Fame.

In an unparalleled career spanning over three decades, Sting has earned the moniker of “The Icon”, having competed all over the world for various promotions, but was most notably the heart and soul of WCW. Sting would arrive in the Atlanta-based promotion in 1987 and would remain as a top tier competitor until WCW closed its doors in 2001. Throughout his time in WCW, Sting would have six reigns as WCW World Heavyweight Champion, two reigns as WCW United States Champion, and three reigns as WCW World Tag Team Champion, feuding with the likes of Ric Flair, Hollywood Hogan, Vader, Scott Hall, and Kevin Nash, among others. Throughout his legendary career, Sting became known as the biggest wrestling star to never compete for WWE, but that would all change in 2014 when “The Icon” would arrive in WWE in a moment that the wrestling never thought would happen. Sting would go on to face Triple H in his first ever WrestleMania match at last year’s WrestleMania before challenging Seth Rollins for the WWE World Heavyweight Championship at Night of Champions in September. Unfortunately, Sting was injured on that night and has remained on the sidelines ever since, fueling speculation that the 57-year old legend may officially announce his retirement at the Hall of Fame Induction Ceremony.

While he was also known as Sir Charles, Papa Shango, Kama Mustafa, & The Goodfather throughout his tenure in WWE, Charles Wright will forever be remembered as the charismatic ladies man known as The Godfather. The colorful, flamboyant conductor of the “Ho Train”, The Godfather would make a career out of his band of ladies and his immense in-ring ability. While only racking up one reign as the Intercontinental Champion during his time as The Godfather, “The Pimp Daddy” would leave an indelible mark on WWE and, in the chaos that was the Attitude Era, The Godfather stood out as a unique athlete and an even more unique character, earning him a spot among the greats in the WWE Hall of Fame.

Known primarily for their epic feud with The Von Erichs for the Texas-based WCCW promotion throughout the 80’s, The Fabulous Freebirds were trailblazers for the entire wrestling scene as Michael “P.S.” Hayes, Terry “Bam Bam” Gordy, Buddy “Jack” Roberts, and Jimmy “Jam” Garvin would revolutionize the tag team wrestling scene throughout their legendary careers. Ushering in the infamous “Freebird Rule” that is still used in wrestling today, The Fabulous Freebirds became the first stable to be the tag team champions as an entirety, meaning any two members of The Fabulous Freebirds could defend the tag titles on the stable’s behalf. In one what iteration or another, The Fabulous Freebirds would remain together until 1994 when the group disbanded. Michael Hayes would ultimately head to WWE, where he would briefly become a manager before transitioning into a creative role within the company where he remains today. Jimmy Garvin would retire from active competition in 1994 and is currently an airline transport pilot. Terry “Bam Bam” Gordy passed away on July 16, 2001 at the age of 40 and Buddy “Jack” Roberts passed away on November 29, 2012 at the age of 67. All four legends will be taking their rightful place in the WWE Hall of Fame and no place is more fitting for their induction then in Dallas, Texas.

Throughout an eighteen-year career in the wrestling business, the late Ray Traylor Jr. established himself as one of the most athletic and memorable big men of all-time. Leaving his job as a real life prison guard in Cobb County, Georgia, Ray Traylor Jr. would get his big break in Jim Crockett Promotions in 1986 when he was given the name Big Bubba Rogers and assigned as the on-screen bodyguard of Jim Cornette. However, Ray Traylor’s biggest break was when he arrived in WWE in 1988, debuting as a prison guard character managed by Slick under the name of “Big Boss Man”. Big Boss Man would ultimately team up with Akeem and form The Twin Towers, feuding with The Mega Powers and Demolition before the team dissolved after Big Boss Man turned face. Big Boss Man would make his WrestleMania debut at WrestleMania VI, defeating his former tag team partner Akeem in less than two minutes. Big Boss Man would then have feuds with the likes of The Mountie and Bam Bam Bigelow before deciding to sign with WCW in 1993. Ray Traylor Jr. would have several different names over a five-year stint in WCW including The Boss and The Guardian Angel before reverting to his original ring name of Big Bubba Rogers.

Following a scheduled debut that never materialized due to an injury in 1994, Jacqueline would ultimately debut in WWE in 1998 as the new girlfriend and valet of Marc Mero following Mero’s split from Sable. This would lead to a feud between Jacqueline and Sable that would include a bikini contest at Fully Loaded 1998 and a match at SummerSlam where Jacqueline teamed with Marc Mero to face Edge and Sable. In September, Jacqueline would defeat Sable to win the newly reinstated Women’s Championship, but the reign would only last a couple of months with Sable defeating Jacqueline for the title at Survivor Series. Following her split from Marc Mero, Jacqueline would join forces with Terri Runnels to form the team known as “P.M.S.” or “Pretty Mean Sisters”. PMS would recruit Meat (Shawn Stasiak) to their group and were also joined by Ryan Shamrock.

Widely considered to be one of the toughest wrestlers in the history of the sport, Stan Hansen would forge a path through several major promotions around the world with his roughneck style and rugged cowboy appearance. During his time in the WWWF in 1976, Hansen would have a match with Bruno Sammartino over the title and, during a title match between the two, Hansen would break Bruno’s neck, which was attributed to Hansen’s signature lariat. Hansen would make his way to the AWA where he would win the AWA World Heavyweight Championship, but Hansen’s reign as champion would be marred with controversy and Hansen was ultimately stripped of the championship. However, Hansen would then head to Japan where he would continue to defend the AWA World Heavyweight Title despite being stripped of the title by the AWA. The AWA would threaten legal action against Hansen and Hansen would respond by running over the title belt with his truck, mailing it back to AWA with mud tracks on it.

During his time in the All Japan Pro Wrestling promotion, Stan Hansen would become the only man in the company to pin Antonio Inoki and Giant Baba in championship matches. Hansen would then form several different tag teams with the likes of Terry Gordy, Bruiser Brody, Ted DiBiase, Dan Spivey, and Vader. Hansen would then face Vader in a cross-promotional match between AJPW, represented by Hansen, and NJPW, represented by Vader. This match would become infamous for not only the stiffness of the shots exchanged between the two tough competitors, but it would become infamous for an accidental thumb to the eye by Stan Hansen, which would pop Vader’s eye out of its socket. Vader would pop his eye back and continue the match, which was ultimately ruled a No Contest. Hansen would then have a brief stint in WCW before joining back up with the AJPW promotion, where he stayed until his retirement on January 28, 2001.

What are your favorite Hall of Famer memories? Post your comments in the box below.