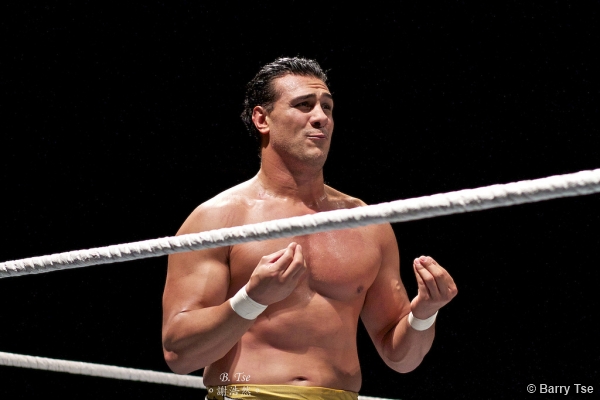 SmackDown kicks off with the Intercontinental Champion as Dean Ambrose makes his way to the ring to address Kevin Owens. Ambrose says that he has an announcement to make before calling Owens, but the self-proclaimed “Prize Fighter” would not show up. Ambrose would then go ahead and make his announcement as “The Lunatic Fringe” would challenge Kevin Owens to a Last Man Standing Match for the Intercontinental Championship at the Royal Rumble! The champion then dares Owens to do what no one else has been able to do and that is keep him down for a ten-count. However, the Intercontinental Champion’s address is interrupted by “The Celtic Warrior” Sheamus, who says that Ambrose is really starting to “annoy” him and all the other “adults” in the back.

Sheamus then says that Ambrose lives in a “fantasy world”, but this is “reality” before saying that Ambrose’s best friend Roman Reigns “stole” the WWE World Heavyweight Championship from him and, now, he has to enter the 30-Man Royal Rumble Match to try and get the title back. Sheamus continues, saying that he doesn’t like to start a fight he can’t finish before saying that he’s not waiting for their tag team match later in the night for a fight.

Ambrose is more than ready for a fight, but as Sheamus makes his way towards the ring, Kevin Owens comes out. Owens says that he is out there to let Ambrose know that it doesn’t matter what kind of match they have at the Royal Rumble because Ambrose is not going to walk out at all before Owens accepts the champion’s challenge! Sheamus and Owens then surround the ring before attacking the Intercontinental Champion, but Neville would make the save and, together, Ambrose and Neville would clear the ring of Sheamus and Owens.

The opening match of the night would be an extreme battle between two familiar families as The Dudley Boyz would face The Wyatt Family’s Luke Harper & Erick Rowan, with Braun Strowman in their corner, in a Tables Match where the only way to win is by putting one or both of your opponents through a table. During a wild match between the heavy hitters, Braun Strowman would toss a kendo stick into the ring, but Bubba Ray would get his hands on the weapon, using it to take Erick Rowan out. Bubba Ray then side-steps Strowman, who goes shoulder-first into the steel ring post. Meanwhile, on the other side of the ring, Luke Harper was about to suplex D-Von through a table on the outside, but Bubba Ray would rush over and push Harper off of the steel steps through a table to win the match for The Dudley Boyz!

After the match, Braun Strowman would take both Bubba Ray & D-Von down and, as Luke Harper exposes the announce table on the outside, Erick Rowan and Braun Strowman would prop up a couple of tables in the corners in the ring. The freakishly strong Strowman would then hurl D-Von through one table before picking him up and tossing him through the other table! Harper & Rowan would then turn their attention to Bubba Ray, wrecking the ringside area before Harper & Rowan ravage Bubba Ray before bringing Bubba Ray on top of the announce table. Harper & Rowan then lift Bubba Ray up and deliver a hellacious double chokeslam through two tables at ringside, effectively laying waste to The Dudley Boyz in ferocious fashion.

The Social Outcasts were in action on SmackDown as Heath Slater, Adam Rose, Bo Dallas, & Curtis Axel would face the team of Goldust, Zack Ryder, Jack Swagger, & Damien Sandow in an 8-Man Tag match. In the end, it was Bo Dallas inadvertently knocking Heath Slater off of the ring apron as he hits the Bo Dog on Zack Ryder, pinning Ryder to pick up the win for The Social Outcasts.

After a shocking upset on RAW where he surprised Alberto Del Rio with a roll-up to become the new United States Champion, Kalisto would make his first title defense on SmackDown as the new champion would defend the gold against former champion Alberto Del Rio. During the match, Alberto Del Rio would go to great lengths to try and injure Kalisto, repeatedly slamming the left arm of Kalisto off of the ring steps. Later on in the match, Alberto Del Rio’s League of Nations cohort King Barrett would come out to ringside. Both champion and challenger would deliver their best shots throughout the match, but a distraction from King Barrett would give Del Rio the opening to lock the Cross Armbreaker in on Kalisto.

However, despite the excruciating pain inflicted on him, Kalisto would manage to get his feet on the ropes to break the hold. Shortly after this, Kalisto would go for a dive to the outside, but Barrett would pull Del Rio out of the way and Kalisto would hit the floor hard. Del Rio then brings Kalisto back into the ring, locking in the Cross Armbreaker for a second time and, this time, Kalisto would have no choice but to tap out and, three nights after losing the title, Alberto Del Rio is once again the United States Champion.

After getting a measure of revenge by attacking Divas Champion Charlotte on RAW, “The Lass Kicker” was in action on SmackDown as Becky Lynch would go one-on-one with Brie Bella, with Alicia Fox in her corner. In the end, it was Becky Lynch locking in the Dis-Arm-Her on Brie Bella, making Brie tap out to pick up the win.

Then it was time for the volatile main event as Intercontinental Champion Dean Ambrose would team with “The Man That Gravity Forgot” Neville to face “The Celtic Warrior” Sheamus and the self-proclaimed “Prize Fighter” Kevin Owens. During the match, Dean Ambrose would dive out of the ring to take out Kevin Owens, but Sheamus would get involved, twice sending the Intercontinental Champion into the steel ring steps. Kevin Owens would then expose the announce table, hitting Ambrose with the hood of the table, causing the match to end by disqualification. Sheamus and Owens then set the steel steps up next to the announce table, but Neville would intervene, diving out to take out both Sheamus and Owens. Ambrose then brings Owens back into the ring, scoring with Dirty Deeds before Neville comes off of the top rope with the Red Arrow to Owens, leaving Ambrose and Neville standing tall in the ring.