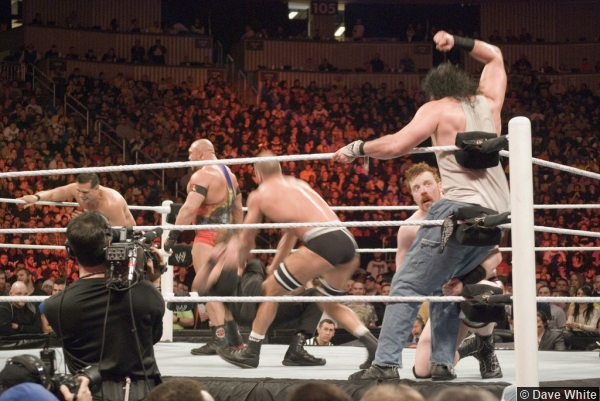 The 29th annual WWE Royal Rumble will come to you, live on the WWE Network, tomorrow night, January 24, at 8/7c from the Amway Center in Orlando, FL. In addition to the 30-Man Royal Rumble Match for the WWE World Heavyweight Championship, the Intercontinental Championship will be on the line in a Last Man Standing Match. Plus, the United States Title, the Divas Title, and the WWE Tag Team Titles will also be on the line. Here is the final card for the 2016 Royal Rumble:

In the 30-Man Royal Rumble Match, two Superstars will start the match and, every 90 seconds, another Superstar will enter into the match. This will continue until all 30 Superstars have entered the Rumble. Elimination occurs when a competitor is sent over the top rope to the outside with both feet touching the floor. The last Superstar remaining in the match will win the Royal Rumble Match and will walk out as the WWE World Heavyweight Champion.

As of this post, WWE.com has only confirmed the entry of 13 of the 30 Superstars in the Royal Rumble Match as Brock Lesnar, Chris Jericho, Sheamus, Bray Wyatt, Luke Harper, Erick Rowan, Braun Strowman, Big Show, Ryback, Stardust, Curtis Axel, Dolph Ziggler, and defending WWE World Heavyweight Champion Roman Reigns are guaranteed to take part in the Rumble Match. Also, as announced this past Monday night on RAW, Roman Reigns will be forced to enter the Rumble as the #1 entrant.

In the Last Man Standing Match for the Intercontinental Championship, the only way to win is to incapacitate your opponent to the point that they cannot get to their feet by the referee’s count of ten. Whoever accomplishes this feat will win the match and walk out as the Intercontinental Champion. The match will have no pinfalls, no submissions, no count-outs, and no disqualifications.

What do you think of the final Royal Rumble card? Post your comments in the box below.