What must it have been like to be among the first to see The Empire Strikes Back when it was released in theaters? To that point, the entire Star Wars “canon” consisted of the original movie and a novel entitled Splinter of the Mind’s Eye. That book was to be the official follow up had the original film not become such an instant hit and pop culture phenomenon. Instead, Star Wars proved to be a hit, and it proved to be such a hit that a sequel was not only expected but it was expected to surpass the brilliance of the original. The first Star Wars movie was the film nobody wanted, nobody understood and nobody cared about. It’s for those reasons (and thanks to the success of American Graffiti) that Lucas was able to have such extensive creative control, even to the point of retaining merchandising rights; Fox didn’t mind giving them away when they assumed the movie would flop. Instead Star Wars merch made Lucas more money than the movie itself.

Fox would have rushed out a sequel by 1978 or 1979 if they could, but Lucas decided to take his time and get things right. He was looking beyond one movie and envisioning, for the first time, a franchise of films. One thing he knew, however, was that he was not going to direct all of them. Instead he slid into the Executive Producer’s chair and turned the directing duties to Irvin Kershner, and the gave the writer’s pen to the man who had just finished writing Raiders of the Lost Ark, Lawrence Kasdan. Together they would do individually what Lucas did on his own in creating the original Star Wars film.

Despite how things are sometimes spun today, Lucas retained tremendous influence over the production. The story was his, as was the decree that the film be darker. Kasdan gave the film it’s voice, but the adventure the characters went on was still straight out of Lucas’ mind. Kershner’s role should not be short-changed, but the fact is his biggest contribution was giving the sometimes-goofy dialogue a little bit more gravitas.

If you go back and watch the original Star Wars film you can admire the kitschy, low-budget quality. In that respect the silly words and mumbo jumbo becomes endearing. Empire, however, had a much bigger budget and it was now a part of a major film franchise. It needed a more grounded, serious tone. The outsider Kershner was able to strike such a tone in a way Lucas probably couldn’t.

So to see Empire for the first time, in 1980, without any spoilers or even any idea of what to expect, must have been exhilarating. We take for granted the now-iconic opening, with the deep blue “a long time ago…” appearing on the screen in advance of the title card and text-scroll. In 1980 who could have predicted that the movie would have started the same way the original film did? It was unheard of (and in fact was forbidden by the Director’s Guild, which prompted Lucas’ resignation from the organization).

And then the film starts, and it doesn’t slow down until the iris-out and the credits roll. 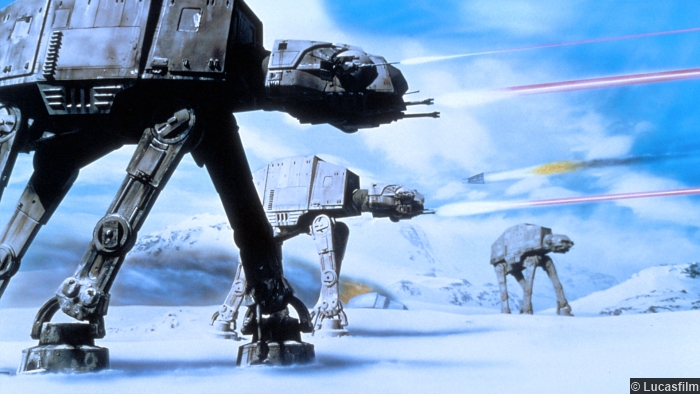 Most of the praise fans give the film has to do with the great moments it brought us: The Hoth battle, the asteroid chase, the introduction of Yoda and the climactic lightsaber fight all stand on their own as memorable parts of the wonderful whole. There’s lots of praise that can be heaped upon The Empire Strikes Back, but it should never be overlooked just how brilliantly paced the movie is, or how pitch-perfect the tone is. Kershner got on Lucas’ bad side by coming in over-budget (despite the hundreds of millions the movie ended up grossing), and the shoot went a little past schedule as well, but the end result speaks for itself. This movie is not just a great Star Wars film, or a great science-fiction movie. It’s a great film, period.

And its success is largely owed to Kershner, who directed the silly moments with such a delicate hand and with a straight-faced seriousness, we don’t even notice how ridiculous they are anymore. The scene right after Han has been frozen features slapstick humor courtesy of a disemboweled 3PO. The scene mid-duel when Vader stars force-tossing random wall props at Luke could easily be a source of unintended humor. The entire scene inside the belly of the space worm ought to be as eye-rolling as any idiotic Jar Jar one-liner. Yoda is a two-foot tall goblin-looking, backwards-talking Buddhist. I can go on but the point is made. Those moments should have taken the viewer right out of the movie. Instead they will themselves into dramatic being. We take them seriously because the movie takes it seriously.

What’s the movie about? It’s so famous for being famous, it’s curious how hard it actually is to summarize in one sentence. You can summarize the original film easily: Star Wars is about a young farmer, an old wizard and a pirate who team up to rescue a princess, each having their own motive for doing so (the farmer wants adventure, the wizard seeks closure, the pirate covets money). That’s it; it’s that simple.

So what’s Empire about? It’s a coming of age story. It’s a space opera romance. It’s about…what? Running from the bad guys is like 75% of the movie. It starts off where the original movie ended (thematically), with a big battle between good and evil. Only this time evil wins. 2/3 of the heroes (and company) then go on the run…to what end? Meanwhile the remaining third sets off to train as a Jedi…again, to what end?

It’s not so easy to lock down the “one” thing this movie is about. Han and Leia’s story is the means to the end of their falling in love. But the story itself is just “we have to hide from the bad guys, so let’s go to see my old buddy and hide therewhoops captured.” That’s it. That’s all that happens. Meanwhile Luke would have been with them had Obi Wan not spoken from beyond the grave and informed him of a reclusive Jedi master that he must meet. So he goes…but why? Because Obi Wan told him to? In order to train? Yes to both but to what end (in terms of the screenplay)? He never intends to fight Vader until well into his time with Yoda. So what’s the original end game? The movie doesn’t address that.

And that’s okay. Because this movie isn’t as two-dimensional as the original film. That movie is external (rescue the princess). This movie is internal (grow up, learn things about yourself). And peppered throughout Empire is more slapstick humor than anything the original movie had. Empire has 2-to-1 more humor per capita than Star Wars, but it works because the film knew how to use the humor; it punctuated the drama, whereas the first movie’s humor sort of stuck out like a sore thumb (not that it was bad, it’s just that the second movie’s screenplay handled it better).

So I go back to the original question: What was it like to watch this movie for the first time, without any spoilers?

Because it seems (to me at least) that this movie takes on a deeper level of significance when its paired with Return of the Jedi. Maybe that’s because it was written to be the first of a two-parter, with the mystery of Vader’s identity and the frozen-Han cliffhanger left to be resolved in 1983. The real driving story of Empire is Luke going from eager, immature farmboy to wisened Jedi Knight. Just as he starts to make some headway he abandons his training and goes off to fight Vader and gets soundly beaten. The payoff doesn’t come until the next movie when his confrontation with his dad is more of a cerebral battle with only minor saberplay in the mix. Once you see the third movie you appreciate the second all the more.

That’s not to say Empire can’t stand on it’s own without Return of the Jedi. On the contrary, though it’s a middle-act in a three-act play, The Empire Strikes Back is a perfect movie on its own merits. And it has something Return of the Jedi lacks: drive.

Jedi is disjointed and jumpy in terms of its pacing. I’ll say more about that in the final review in this series, but to summarize: Jedi spins its wheels too much to be considered a good film. It spends too much time resolving the Han plot-point on Tatooine and then farts around on Endor without any plot developments. Then, suddenly all of the plot gets developed all at once in the third act. There’s no buildup, no tension. Nothing happens and then everything happens all at once.

On the other hand, The Empire Strikes back is like watching two opposing forces slowly converging. Vader is hunting Luke and the young Jedi-trainee isn’t even aware of it. Thanks to Vader’s working in the B-plot, Luke is suddenly given a reason to confront Vader, which plays right into the villain’s hands. As a spectator you want to scream, as Leia does, that it’s a trap, but at the same time you don’t because you know the payoff to the two hour buildup will be magic. And it is. The fight between Vader and Luke, good vs evil, blue vs red, is the best fight in the entire saga. Nothing in the prequels, with all its technology and even three-decades of hype could match it. The repeat at the end of Jedi had a lot more personal drama going on, but it couldn’t match it. I doubt anything in the sequel trilogy will measure up either, no matter how good it may be. The magic of that first Luke vs Vader fight was in how it was built up, from the opening text of the movie to those final thirty minutes. It was knowing that the fight was playing right into Vader’s hands. It was remembering all their near-misses in the original movie. And it was the payoff to an incredible, tension-packed story that had been told.

The greatest compliment that can be paid to The Empire Strikes Back is that it is so good it transcends itself. It expertly walked the line between silly and serious, never letting the former overpower the latter, and never letting the latter linger too long without the former. It took itself seriously, even the humor, and because of that it was able to tell a story—even though it was only one third (and later, one-sixth, and now one-ninth)—that stands on its own as a triumph of cinema.