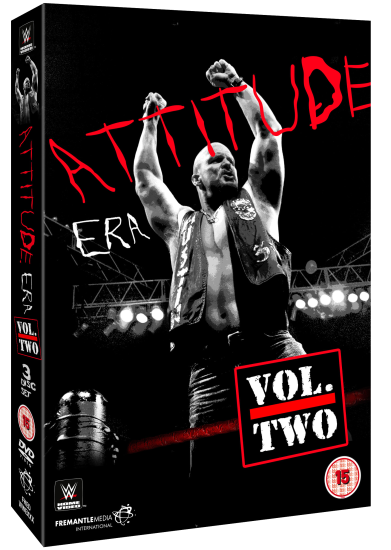 “For the majority of wrestling fans over the age of (say) 25, The Attitude Era is the defining period of pro-wrestling at its peak. Mainstream acceptance on a level alien to today’s product, celebrities fighting over themselves to be featured (or even mentioned on WWE programming), fantastic acts on all levels of the card and the fabled Monday Night Wars at the heart of it all, it’s easy to see why us older fans look at the period of 1997-2001 with such affection.

For those younger fans, it’s can be hard to explain exactly why The Attitude Era worked so well or why so much of it was over to the extent it was. Of course, the stature of Austin and Rock are easy to fathom, as is the level of HBK, The Hart Foundation, DX, Kane, Undertaker, Mankind, etc in the level just below those two megastars.”

The above is how I started my review of the first volume looking back on The Attitude Era, with the main feeling of that review being that a just-under-60min documentary was nowhere near enough to give this heralded period of time the respect and attention it deserves. I still gave that release a high score (9/10) because the documentary was fantastic and the matches / segments that make up the rest of the running time were mostly great.

However, with this new release it’s time to find out if any lessons were learned and I’m sorry to say that this is a much worse DVD set, with no documentary feature to speak of and, while they are in chronological order, the segments themselves still come off rather hotch-potch in their delivery. It would perhaps have been wise to focus on a single subject and run through that chronologically before switching to a different subject and doing the same thing.

Some of the talking-head segments are funny and / or let you in on little backstage secrets you weren’t aware of, but they are so few and far between, not to mention so short, that it’s almost as if the production staff put them in as an afterthought.

The first disc gets off the worst possible start as Michael Cole introduces things. Thankfully, you won’t see him again in this capacity until the end of the third disc, but he is so smarmy and fake, it’s almost enough to make you want to turn it off there and then.

Persevere though and you will get some hidden gems, mostly forgotten mid-card matches featuring the likes of Chyna, Hardcore Holly, Billy Gunn, Val Venis, Kai en Tai (and yes, “I CHOPPY-CHOPPY YOUR PEE-PEE” made it in), Chris Jericho, Kurt Angle, The Brood, The Hardys, The APA and The Godfather.

As said though, there isn’t really enough time to explain certain characters to those who missed them the first time around. Angles and segments aren’t given any depth either, so a newcomer will be lost as to why so-and-so are feuding, etc.

The one character that does actually get a lot of explanation and segments is “Sexual Chocolate” Mark Henry and as genial as Mark is, this is not the one that should have been over-indulged.

Matches such as Kurt Angle v Jericho (and those two v Tazz in a three-way), Sauve Secret Agent-era Dean Malenko v Latino Heat-era Eddie Guerrero, Hardys v The Brood, Lita & Rock v Trish & Triple H and the white-hot atmosphere any time Steve Austin was in the ring or at ringside will always be welcome, but The Attitude Era is screaming out for a full and in-depth look at what worked, what didn’t work and why it has remained so beloved by so many.

There are no extras.

No documentary at all is such a disappointment that it’s hard to look past this and praise anything else. However, there are some enjoyment to be had in some of the segments and matches, so it isn’t a total bust.

The talking-heads are welcome, but so rare that they could be classed as endangered and I hope this is just an anomaly from the normally sterling output from WWE’s production staff. The jumping around from character to character, etc, can get annoying, but hearing that The Godfather’s wife was the one who came up with the gimmick and refined it until it was one of the most over acts on the roster was quite the revelation.

If you can get it cheap, then buy it. If not, a rental will suffice.

Blu-Ray customers also get the following for their extra spendage -: