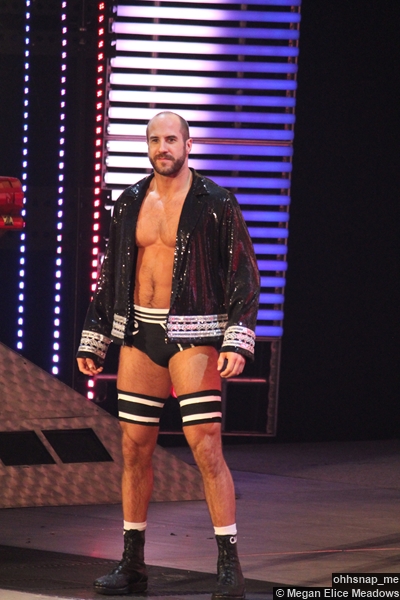 Before he goes one-on-one with Bray Wyatt this Sunday at Battleground, SmackDown kicks off with “The Big Dog” Roman Reigns. Roman says that Bray Wyatt is not in his head and Bray cannot break his focus, warning Wyatt to stay out of his way tonight. Reigns is then interrupted by his Battleground opponent as Bray Wyatt appears on the Tron from his dark location. Bray says that he can feel Roman’s “presence” and, for a moment, he “admired” Reigns and he could see why the people “believed” in Roman. Wyatt continues, saying that Roman is a “stone monument that represents everything good” before saying that he is the “hammer” that will leave the monument “crumbling on the ground”. Not in the mood for games, Roman dares Bray Wyatt to come to the ring and fight him, but Bray just laughs, saying that “this is what true power looks like”. Bray then tells Roman to collect his “roses”, saying that, at the end of the day, none of the fans are “real”, saying that he is capable of some very “horrific things” and their game has “only just begun”. Roman says that the only thing that is “real” is that the fans saw Bray Wyatt “run” from him on RAW before Bray tells Roman to go home and surround himself with the people he loves. Bray then says that, after Battleground, Roman cannot promise that he will be “coming home”, telling Roman “anyone but you”.

Before he puts his crown on the line against R-Truth in the Battle for the Crown on the Battleground Kickoff this Sunday, 2015 King of the Ring King Barrett would go one-on-one with Jack Swagger on SmackDown. In the end, it was King Barrett scoring with the Royal Bull Hammer, pinning Jack Swagger for the win. After the match, the self-proclaimed “King What’s Up” R-Truth would come out to the stage with his plunger and duct-taped crown. However, King Barrett would refuse to let R-Truth speak, saying that he is sick of it because he won an eight-man tournament to earn the right to be called the King of the Ring. Barrett continues, saying that Truth couldn’t win the tournament so Truth decided to make a “mockery” out of the prestigious accomplishment, saying that the “jokes” will end this Sunday and R-Truth will be “bowing down” to the one, true King of the Ring and they will “all hail King Barrett”.

After Cesaro, Rusev, and, to a lesser degree, Kevin Owens waged war in a classic Triple Threat Match on RAW, SmackDown would see “The Swiss Superman” Cesaro square off with “The Bulgarian Brute” Rusev, with Summer Rae in his corner. At the end of a grueling match, it was Rusev trying to come off of the top rope, but Cesaro catches “The Bulgarian Brute” in mid-air with the European uppercut, following it up with the Neutralizer to pin Rusev, picking up a major upset as Cesaro becomes only the second man to ever pin Rusev!

In a rematch from RAW, SmackDown would see the intergalactic enigma known as Stardust square off with “The Man That Gravity Forgot” Neville. During the match, Stardust would again try to gain an unfair advantage, but the referee would catch Stardust and, while Stardust is arguing with the referee, Neville would take advantage, surprising Stardust with a roll-up to pick up the win.

Backstage, Neville is being interviewed about his victory over Stardust when Stardust attacks Neville from behind, leaving Neville face down on the concrete, saying that there is going to be some “turbulence” in the “altitude era”.

Then it was time for the main event as, before he squares off with Bray Wyatt at Battleground, Roman Reigns would team with “The Lunatic Fringe” Dean Ambrose to face “Mr. Money-in-the-Bank” Sheamus and “The World’s Largest Athlete” Big Show. During the match, Dean Ambrose and Big Show would take their battle to the outside where “The World’s Largest Athlete” would try to put Ambrose through the announce table with a chokeslam, but “The Lunatic Fringe” would counter with a DDT, sending both men crashing through the announce table, leaving the match to just Roman Reigns and Sheamus! Shortly after this, Roman Reigns connects with the Superman Punch, but before Roman can finish Sheamus, Bray Wyatt attacks Reigns, ending the match by disqualification. Bray would look for Sister Abigail on Roman Reigns, but Roman would counter, dropping Wyatt with the Superman Punch. Sheamus would then try to get the jump on Roman, but “The Big Dog” would see the attack coming and would blast “Mr. Money-in-the-Bank” with the Spear! This leaves Roman Reigns standing tall in the ring as Bray Wyatt recovers on the stage, glaring at Roman Reigns with a sick smile on his face.