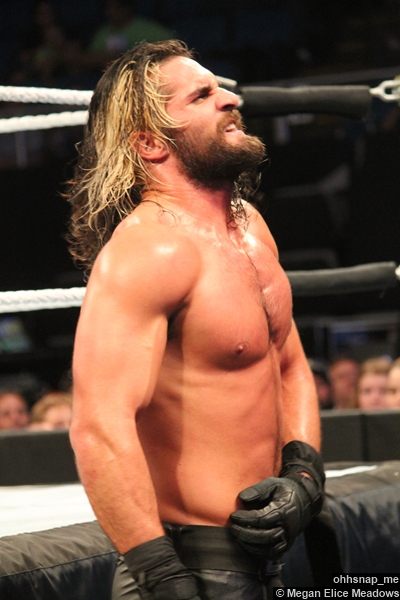 Running for the Hills.

Ten nights before WWE Battleground, the 829th edition of WWE Thursday Night SmackDown came to you from the BMO Harris Bradley Center in Milwaukee, WI. After witnessing his Battleground challenger Brock Lesnar not only destroy J&J Security’s brand new Cadillac CTS, but destroy J&J Security as well, WWE World Heavyweight Champion Seth Rollins would be on his own on SmackDown as the self-proclaimed “future of WWE” would go one-on-one with another man who will put his title on the line at Battleground, Intercontinental Champion Ryback, as the two champions would square off in a non-title Champion vs. Champion match!

On RAW, Bray Wyatt continued to get inside the head of Roman Reigns, this time utilizing a faux Bray Wyatt to cost Roman his match against Sheamus and, on SmackDown, “The Big Dog” will be looking to send a strong message to Bray Wyatt when Reigns goes one-on-one with “The World’s Largest Athlete” Big Show! Can Roman Reigns instill fear in “The New Face of Fear” with a dominant display against Big Show or will Bray Wyatt continue to have the advantage as Battleground approaches?