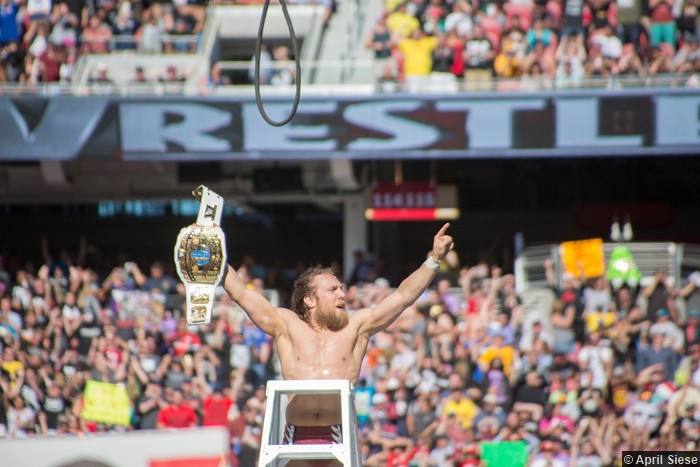 Before he defends the United States Championship against Rusev in the first ever televised Russian Chain Match at Extreme Rules, SmackDown kicks off with United States Champion John Cena. Cena thanks London for a great week for WWE before turning his focus to the Russian Chain Match against Rusev at Extreme Rules. “The Champ” explains that, at Extreme Rules, he and Rusev will be tied at the wrists by a thick Siberian steel chain and the only way to win is to drag your opponent around the ring and touch all four ring corners in succession. Cena continues, saying that the Russian Chain Match will be brutal and there is a chance that he may not even be defending the title at Extreme Rules because of his U.S. Open Challenge. Cena then declares that the U.S. Open Challenge begins right now, asking for any Superstar who wants a title shot to come out there and face him. However, this brings out two competitors as WWE Tag Team Champions Cesaro & Tyson Kidd, along with Natalya, come out to the stage. Tyson Kidd explains that they are not out there to accept John Cena’s U.S. Open Challenge, saying that they are the “greatest champions in WWE” right now. Now in the ring, Cesaro says that everyone wishes that they could not see John Cena because they want to see the greatest champions in WWE, Cesaro & Tyson Kidd. Cena then says that, since neither of them want to see him, then how about one of them steps up and the other steps down. This brings out Intercontinental Champion Daniel Bryan, who says that he heard talk of the “greatest champions in WWE today”, polling the crowd on who is the better champion. Bryan then dares Cesaro & Tyson Kidd to back up their claims, challenging the WWE Tag Team Champions to a match against himself and John Cena. While Cesaro & Tyson Kidd discuss possibly accepting the challenge, Natalya steps forward and accepts the challenge on Cesaro & Tyson Kidd’s behalf with Tyson Kidd having no choice but to echo his wife’s acceptance!

As he targets another unnamed individual in his creepy sermons, Bray Wyatt would be in action on SmackDown as the self-proclaimed “New Face of Fear” would go one-on-one with R-Truth. In the end, it was Bray Wyatt hitting R-Truth with Sister Abigail, pinning R-Truth for the win.

England’s own Bad News Barrett was in action on SmackDown as Barrett would go one-on-one with the self-proclaimed “A-Lister” The Miz. After The Miz took ample time to show off to the crowd and take off his sunglasses, The Miz would turn around into a Bull Hammer Elbow from Bad News Barrett as Barrett pins Miz in mere moments to pick up the win.

Backstage, an interview with Damien Mizdow and Summer Rae is interrupted by The Miz, who says that Mizdow’s win on RAW was a “fluke” and he wants a rematch. The Miz then says that he also wants Mizdow to stop using his name, his moves, his entrance, and everything else, saying there is only “one Miz”. Summer Rae chimes in that Damien Mizdow is better at being The Miz than The Miz is. Mizdow then mimics The Miz before Summer Rae whispers an idea to Mizdow before Mizdow challenges The Miz to a match on RAW where the winner gets to keep The Miz’s look, moves, and the entire Miz license. After some taunting from Summer Rae, The Miz would accept the challenge before telling Summer that she will have to go back to her “lingerie football league”, which results in Summer slapping Miz across the face with Mizdow mimicking the impact.

In a match requested by Neville himself, “The Man That Gravity Forgot” Neville would go one-on-one with the man who attacked him and Dolph Ziggler on RAW, “The Celtic Warrior” Sheamus. Neville would use his lightning quick offense to give Sheamus plenty of trouble in the match, but when both men found themselves on the outside, Sheamus would slam Neville on the announce table, ending the match by disqualification. After the match, Sheamus would drag the helpless Neville off of the announce table, carrying Neville back into the ring before delivering several knees to the skull of Neville. Having seen enough, Dolph Ziggler rushes the ring, attacking Sheamus as Sheamus quickly retreats from the ring. Dolph then grabs a microphone, saying that no one in the world likes Sheamus because Sheamus is nothing more than a “bully”. Ziggler continues, saying that the only way to deal with a bully and that is “stand up” to him, so that is what he is doing right now, daring Sheamus to come back to the ring. Sheamus responds by saying that Dolph Ziggler is a “little man speaking big words” before telling Ziggler, “kiss me arse”. Sheamus then clarifies that he and Dolph Ziggler are going to face off at Extreme Rules in a Kiss Me Arse Match, saying that Dolph is going to kiss his “arse” come Extreme Rules. Taken aback by the bizarre challenge, Dolph Ziggler says that he will face Sheamus in any kind of match he wants, saying that, at Extreme Rules, he is going to make Sheamus kiss his own arse!

Backstage, Fandango clarifies his actions from RAW to Rosa Mendes, dumping Rosa Mendes in favor of sharing his love of dance with the entire world. However, after Fandango exits, The Exotic Express dances past Rosa and Adam Rose stops to talk to Rosa, telling Mendes that, when he looks at her, he sees Rosa for what she truly is. Rose then tells Rosa that, if she makes the “right move”, then she might just be number one again in a “certain somebody’s life”, telling Rosa to “think about it”.

After delivering a huge chokeslam to Roman Reigns that dented the top of a London taxi cab on RAW, “The World’s Largest Athlete” Big Show would appear on SmackDown to explain his actions. Big Show says that the London fans do not “appreciate” him, saying that he can do whatever he wants and “nobody in the world” can stop him, not even Roman Reigns. Big Show then says that Roman was “disrespectful” to him on RAW, saying that he doesn’t answer to Reigns, he only answers to The Authority. Big Show continues, saying that he sees Roman as a “victim of a car crash”, walking everyone through his assault on Roman Reigns this past Monday night on RAW. Big Show then reveals that Roman Reigns refused medical attention on RAW, somehow managing to walk to the back on his own. Big Show then says that he has went to The Authority and asked them for something and they have given it to him, standing on the hood of the taxi cab as he announces that The Authority has granted him a Last Man Standing Match against Roman Reigns at Extreme Rules! Big Show then concludes that, when he’s done with Roman Reigns, he won’t be the “last man standing”, telling everyone to “respect that”.

The Divas were in action on SmackDown as Natalya, Cameron, and Alicia Fox would face off in a Triple Threat Match. In the end, it was Alicia Fox hitting the Scissors Kick on Natalya, but Cameron would throw Alicia Fox out of the ring, stealing the pin on Natalya to pick up the win.

Back to being the leader of the “Fandangoing” movement, Fandango would go one-on-one with Adam Rose on SmackDown. During the match, Rosa Mendes would make her way to ringside, screaming at Fandango and allowing Adam Rose to take advantage. However, Adam Rose would appear to get the wrong idea, so Rosa would get on the ring apron to try to explain herself to Rose, but this would end up costing Rose the match as Fandango rolls Rose up to pick up the win. After the match, Fandango would lead the crowd in “Fandangoing”.

Then it was time for the main event as United States Champion John Cena would join forces with Intercontinental Champion Daniel Bryan to face WWE Tag Team Champions Cesaro & Tyson Kidd, with Natalya in their corner, in an All Champions Tag Team Match. During the match, Tyson Kidd would inadvertently knock Natalya off of the ring apron and Cesaro would catch Kidd’s wife, but when he saw that Daniel Bryan had his partner locked in the Yes Lock, Cesaro would toss Natalya aside to try and save Tyson Kidd. However, John Cena would catch Cesaro with the Attitude Adjustment as Tyson Kidd taps out to the Yes Lock as John Cena and Daniel Bryan pick up the win over the WWE Tag Team Champions. The United States Champion and the Intercontinental Champion then celebrate their victory, leading the London crowd in a “yes” chant.