The Rise and Rise of Steampunk. Isn’t it time the fans were given the movie they deserve?

Steampunk is big. In fact, that is a huge understatement. Steampunk is a cultural phenomenon, its Victorian cult science fiction theme is incredibly influential throughout literature, fashion, television, and art, and it continues to grow. If you’ve ever attended a ComicCon in any of the far flung corners of the world you will have come across many a fan. For every storm trooper there will be three steampunk enthusiasts stood to the side of them; but they cling to the shadows, though not for the want of trying. The genre is just waiting for someone to take it by the hand and lead it to the front of the stage in all its perfunctorily innovative glory. But where is their pioneer, and how do they emerge from the darkness they inhabit? Isn’t it time someone took this mechanical bull by the horns? This movement needs its movie, and although many have tried it still hasn’t manifested itself in the way its fans have always craved. Step forward mysterious shadow dwellers and claim your rightful place in the limelight.

Ever since HG Wells wrote The War of the Worlds in 1898 fans have craved to see his masterpiece brought to life. Byron Haskin gave us as much as the 1950s cinematic technology could garner in 1953, producing a far superior version to the Steven Spielberg 2005 movie of the same name starring Tom Cruise. But the steampunk theme that so many had hoped would come with it was lost to yet another modern re-imagining, something that this writer really doesn’t like that much at all. Wells’ prose gave the inimitable director so much to work with that it remains a mystery why it wasn’t used as the blueprint for the movie. The words just scream of Victorian England and the giant mechanised behemoths that would come careering across the Thames before enslaving and destroying the rest of the world, all in the glorious medium that is the big screen. Hell, we might have even have let you get away with a 3D version if you’d stayed true to the cause, Steven.

“At first I took it for the wet roof of a house, but one flash following another showed it to be in swift rolling movement… And this Thing I saw! How can I describe it? A monstrous tripod, higher than many houses, striding over the young pine trees, and smashing them aside in its career; a walking engine of glittering metal, striding now across the heather; articulate ropes of steel dangling from it, and the clattering tumult of its passage mingling with the riot of the thunder.”

But Spielberg is not the only one to have tried and failed. There were many who had already laid the foundation for the ultimate steampunk fantasy to reach our wide-open arms, some more successful than others. Here are the main protagonists in what is a hugely underestimated market just waiting to explode into the mainstream. The mechanics are all in place. It just needs someone to stoke the fire sufficiently enough to awaken these sleeping giants. 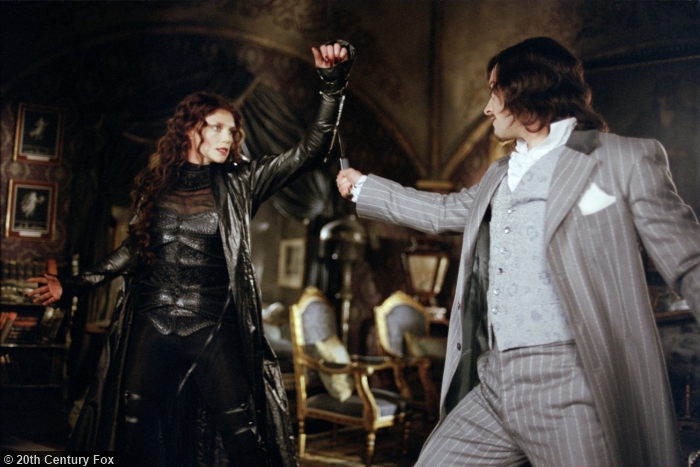 The League Of Extraordinary Gentlemen, from writer extraordinaire Alan Moore, should have been the one. It had everything there, but it just about scraped its $78m budget back and the mystery still remains as to how these creators are getting things so wrong. Hugo was widely acclaimed for its innovation and creativity, and although the steampunk ideas were in there it still didn’t quite address the genre, rather doffing its cap to industry and mechanics. The steam was there but the punk was lost. Christopher Nolan’s The Prestige, starring Hugh Jackman and Christopher Bale, is a genuinely great film set in Victorian London telling the tale of two battling magicians, each trying to outdo the other in increasingly sinister circumstances. This was as close to steampunk as we’ve managed to achieve, perhaps with the exception of the Studio Ghibli animated movies – Steamboy, Spirited Away, and Howl’s Moving Castle – but it still only left us wanting for more. Much more. Van Helsing tried to adopt the mantle, but the film is more gothic than steampunk – apart from Hugh Jackman’s steam-powered crossbow. That is pure steampunk. Guillermo del Toro’s movies have always had a touch of the steampunk in there, and the director is possibly our best chance of a real epic. His Hellboy movies are laced with all things mechanical, innovative, and technological and we can only dream that the Mexican mastermind has something up his sleeve ready to unleash on the waiting world. Alas, there is no sign of anything yet… Throw in Wild Wild West, Sherlock Holmes, The Golden Compass, and pretty much every Tim Burton movie ever made and you can begin to see that the genre is just desperate to burst from behind the curtain. It’s just waiting for someone to tear it back.

The creators, and indeed financiers, of these feature films should be applauded for trying something new, and it is testament to the genre’s fan base that they keep trying to crack the market, but it just feels a little like they haven’t quite got it yet. There is hope out there though for the millions of fans eager to see their world brought to life in its full and emblazoned glory as already shown by the likes of Guillermo Del Toro, Tim Burton, and Christopher Nolan who are keen to explore the theme much further. These are the directors of choice and they champion the cause for the entire steampunk genre. They have the power in Hollywood to command huge budgets and can deliver us something truly inspiring. The mechanics of the clock and its inner workings are key within the steampunk theme, but we cannot stop time itself, gentlemen. The foundations are out there. You just need to give the people what they want sooner rather than later. The clock is ticking…