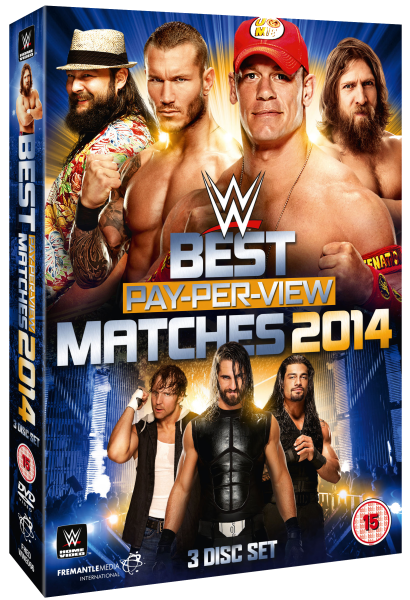 As with the previous year’s “Best PPV Matches of 2013”, the set only actually covers the first ten months of the year. Since it’s released so early into 2015 and is a UK-only release to boot, that’s understandable from a production POV.

The collection does a good job of covering each of the big shows and while there are guys who get multiple entries, the variety of stipulations and scenarios make up for it.

Continuing the tradition, if you’re a fan of stats, here’s a list of who is featured across the three discs and how many times they appear -:

The selection of matches on display with this collection are, for the most part, worthy of inclusion. Of course, with any list you’re going to have moments of “why the Hell is that there” along with the equally predictable “why the Hell isn’t that there”, but WWE have put together a decent run of bouts.

2013 belonged to The Shield and at the beginning of 2014, it seemed like that trend was going to continue and for the first six-months of the year, it did… until “Plan B” was put into effect. The Shield disbanded violently and The Authority angle ran on stronger than ever.

We also thought that, after the debacle at the Royal Rumble, the year would belong to Daniel Bryan and, much like The Shield, it was definitely panning out that way until injury took him out in May and kept him out until mid-January 2015.

The set opens with a match that is probably overlooked in most people’s end-of-year voting as Daniel Bryan took on Bray Wyatt (after the first serious mis-step in the Wyatt Family angle). Bray stays on for the second match as he is joined by his family of Erick Rowan and Luke Harper to take on The Shield in one of the most hotly anticipated six-man matches of the modern era… at it certainly didn’t disappoint as the six men had the fans chanting “This Is Awesome” before the match even began and then, once the bell rang, let rip with an in-ring masterpiece that was my personal Match of the Year.

The Elimination Chamber was a good bout also, but the result itself was never in doubt, so lacked a sense of urgency these bouts require. The same cannot be said for the two matches that close out the first disc.

Daniel Bryan v Triple H and, later, Bryan v Orton v Batista was a night-long angle that gave us the best feel-good moment in recent memory. A direct result from the backlash of the Royal Rumble result (seriously, go back and listen to the boos Rey Mysterio – REY MYSTERIO – gets from the fans in attendance when he comes out as #30), the opener of HHH v Bryan was a brilliantly structured match from beginning to end. Trips put in a great shift to match Bryan, even pulling out a few new moves, which is impressive for a guy so far into his career, and deserves credit for putting over Daniel Bryan clean in the middle of the ring. No kicking out of the running knee strike, just a straight knockout shot and the three-count.

Of course, this then had Daniel Bryan join the main-event, but not before Triple H absolutely destroyed him in a post-match beatdown, giving us a wonderful “Will he be able to compete in the title match” storyline for the rest of the show.

The main-event also saw Batista (now revelling in his glorious heel persona) and Orton have their working boots on as an injured Bryan weathered the odds and a stunning double-team Powerbomb / RKO (technically “just” a neckbreaker) through the announce table. It has to be noted that Randy took a really bad bump on an errant TV monitor that could have been catastrophic were it not for the flimsy protection of the table decoration.

Overcoming interference from The Authority, slamming Triple H in the face with his own sledgehammer and then nailing Batista with the running knee before tapping him out to the Yes! Lock, Bryan cemented his legacy and closed the show with both belts in his arms, celebrating with the late Connor Michalek and covered in confetti. There would be no SummerSlam thunder-stealing going on here.

The big question now is how could the rest of the set possibly top the first three months of 2014? The short answer is that it doesn’t, but there is still a lot of great action, beginning with the much-better-than-it-had-any-right-to-be WeeLC Match between Hornswoggle and El Torito. Mini announcers, mini tables and ladders added up to a fun little bout that, while technically not a PPV bout, deserves a spot on the set.

Big E (no longer Langston) v Bad News Barrett and Sheamus v Cesaro were matches where it was two guys clubbing the ever-loving snot out of each other and it was fantastic. The meat between those two was a genuinely stunning contest featuring a reunited Evolution taking on the most dominant group probably since their glory days, The Shield. At Extreme Rules, they fought all over the arena, with great spots and brutal action throughout. As with WrestleMania, the veterans deserve a ton of credit for putting over the current crop so effectively.

It’s a shame that their rematch from Payback isn’t on here also, but that could be seen as overkill.

Rounding out the second disc, Cena v Bray in a Last Man Standing Match is the best of their series, but I believe most wrestling fans want to forget this feud ever actually took place at all. As usual, the Money in the Bank Ladder Match is the epitome of a stunt show, but is done with such panache that it is rarely disappointing. Highlight for me was the CHEER for Ambrose’s return.

The Usos really stepped it up in 2014 and their matches with Harper & Rowan were always good-to-great bouts. The 2-out-3 Falls Match at Battleground was easily the best of the bunch and is a sterling example of how tag-team wrestling has a place in the modern era. Finally for this disc, the Battle Royal for the IC belt is what you’d expect, but these type of matches are usually fun to watch (sorry for stealing your line, JBL).

For me, the third disc is the weakest of the three, but it still has a lot to offer.

That being said, Brock v Cena from Night of Champions is a good match, but it’s not the spectacle their previous one at SummersSlam was. Usos v The Dust Bros. is another good match, but these guys had fought so many times before this match and so many times since, that they are now just a tag-team cliché at this point.

AJ Lee v Paige is the sole female entry on the set and it’s a good match, but both have had better. That being said, I do predict great things for the UK star.

Rusev, for me, has been the most consistent in the ring for the year and his match against Swagger was really good. One of the few who actually seems to know how to sell an injured body part properly (both on defence AND offence), his bouts have been good-to-great across the board. Rollins v Ambrose was possibly the wildest Lumberjack Match you’ll see in the promotion and Cesaro v Ziggler in another 2-out-3 Falls Match (WWE really seem to have embraced this old-school stip as of late) was an awesome showcase for both guys.

Unfortunately, the disc and the collection as a whole closes with a Hell in a Cell Match between Cena and Orton. Much like the negatives associated with Usos / Dusts matches, it’s not that their bad, it’s that we’ve seen them face each other so many times the bouts start blending into one.

Because of that, the WWE production logo appears and the set ends with LOLCENAWINS!!! going through your mind. Bear in mind, the main event was Ambrose v Rollins (with an appearance from HoloWyatt) and was a better match.

As with last year, it’s odd to finish in October, especially as Survivor Series was such a strong show and it should have been easy to slip in at least the frankly awesome main-event Elimination Match.

If you own the individual PPVs, there is no need to buy this, but if you don’t, then this is a great showcase for why there is still great matches to be had in the modern era. Nostalgia blinds us to many faults, so the majority believe this is one of the worst periods to be a fan, but hopefully this collection will help change your mind.

What I know WILL change your mind is when the promotion eventually releases the Best of NXT (Full Sail Era). That will be a must-have of the highest order.

The set I reviewed was the DVD edition as there is no Blu-Ray release for this one.