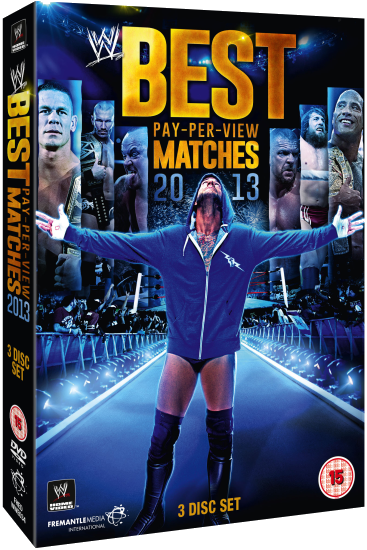 While it says that this set covers the best PPV matches from 2013, a more accurate title would be Best PPV Matches From the First Ten Months of 2013… but that wouldn’t be as catchy, would it?

As easy as it would have been for WWE to simply fill this set with matches featuring The Shield and / or Daniel Bryan, the promotion has done a great job of including a variety of roster members in a variety of match types and stipulations.

If you’re a fan of stats (and let’s face it, who isn’t?), here’s a list of the wrestlers involved on the DVD release and how many matches they feature in -:

The selection of matches on display with this collection are, for the most part, worthy of inclusion. Of course, with any list you’re going to have moments of “why the Hell is that there” along with the equally predictable “why the Hell isn’t that there”, but WWE have put together a decent run of bouts.

It does help that 2013 was one of the strongest years for in-ring quality in a long time and that a lot of talent broke through to varying degrees. None more so than the trio known as The Shield.

Opening the set with The Rock v CM Punk for the WWE Championship brought back the ill-feeling I had at the time of the out taking place. Ending Punk’s epic run on top for a celebrity (Rock or no Rock, he was at that time a non-wrestler who made his living as a movie star) left a sour taste in the mouth, but luckily the second match on the chronological countdown brings this to peak excitement and enjoyment.

To say that 2013 was the year of The Shield is no hyperbole; the Hounds of Justice owned every show and every segment they were in and their matches were of such consistent quality, the idea of them breaking up (as much as it is inevitable) is genuinely heartbreaking.

Their six-man matches are the stuff modern legend is made of and the fact these young newcomers were not only holding their own against established names, they were dominating and winning impressively. This match against Sheamus, Cena and (before he became an afterthough) Ryback is filled with innovation and amazing teamwork.

That might sound hypocritical when praising an Undertaker match at WrestleMania, but there is NEVER going to be any doubt on that result and the fact the result is known does no harm to Undertaker’s bouts. With Rock / Cena, it took an important element away from the closing match of the biggest show of the year.

The Barrett / Miz / Axel match is memorable only for the creative finish (which I felt was going to happen the way it did, except Axel would pin Miz while he had Barrett in the Figure Four) and the real emotion from Mr. Perfect’s son to win the belt his dad exemplified on Father’s Day.

AJ v Kaitlyn was really good, while MitB was as you’d expect, which isn’t a slight as the match is fantastic. Triple H v Brock was brutal (and the genuine “feel” Lesnar brings is something that can’t be explained; it has to be experienced) and Orton v Big Show was a worthwhile distraction to keep both men busy heading into the Summer.

The best WWE PPV of 2013 (as voted for by the CultofWhatever.com fanbase) was SummerSlam and the event is represented here with two top-level outings. First we have Brock Lesnar taking on CM Punk as a proxy for Paul Heyman and then we have my pick for one-on-one Match of the Year; John Cena v Daniel Bryan.

Triple H also deserves credit for not overshadowing a single second of match from bell-to-bell and the action in the ring is at an unbelievably high standard, with the finish being one of the most unexpected highlights of recent memory. The after-match shenanigans received a more mixed response, but overall the subsequent Authority angle has been a success… and will continue to be so as long as the actual end-game results in Daniel Bryan emerging victorious as WWE World Heavyweight Champion.

Reigns / Rollins v Goldust / Cody is an unexpected gem, Del Rio v RVD was a really good match marred by a lousy finish, while Hell in a Cell Match between Orton and “Th Beard” was another exciting bout with an obvious, but ridiculously heated finish.

It seems strange that WWE ended their PPV year in review two months early, especially as it’s only being released now, so there was plenty of time to include any matches from November (Roman Reigns’ epic Survivor Series performance) and December (the TLC main-event), but the bouts on the collection are, for the most part, well worth repeat viewing.

Of course, if you actually own the PPVs individually, there would be no need to own this, but for everyone else, this is a great reminder of just how good WWE on PPV was in 2013.

As a quick aside, as much as I love the match between The Shield and The Usos from the MitB Kick-Off show, I don’t feel that it should be on this set as the match itself was not a pay-per-view bout; it was a free-to-air pre-show match. Still, it’s one of the best matches on the entire set, so you can’t complain too hard.