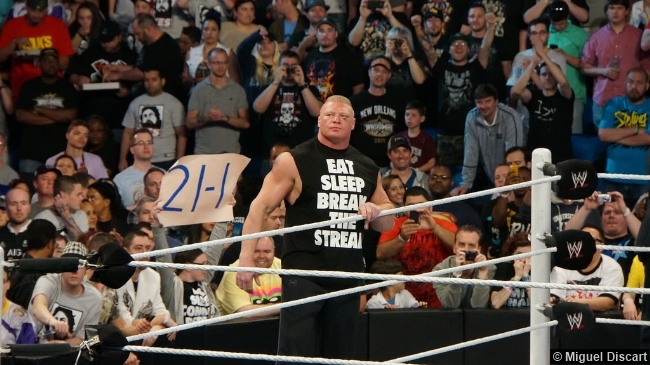 Six nights before the Royal Rumble, the 1130th edition of WWE Monday Night RAW came to you, live, from the American Airlines Center in Dallas, TX. On a special RAW Reunion show, RAW would be packed with legends and Hall of Famers as “The Immortal” Hulk Hogan, sixteen-time World Champion Ric Flair, “The Heartbreak Kid” Shawn Michaels, Scott Hall, Kevin Nash, X-Pac, Billy Gunn, Jimmy Hart, & Ron Simmons are all scheduled to appear on RAW! With RAW paving the way for the Royal Rumble, will past Royal Rumble winners Hulk Hogan, Ric Flair, & Shawn Michaels have anything to say regarding the 30-man melee?

Last week on RAW, a contract signing for the Triple Threat Match for the WWE World Heavyweight Championship at the Royal Rumble between champion Brock Lesnar, #1 Contender John Cena, and “Mr. Money-in-the-Bank” Seth Rollins concluded with Seth Rollins making a major statement by not only delivering a Curb Stomp to John Cena, but Brock Lesnar as well! Add that to Seth Rollins threatening Brock Lesnar’s advocate Paul Heyman on SmackDown and “The Beast” is certainly seething and ready to destroy Seth Rollins. Will the WWE World Heavyweight Champion show up on RAW to exact his revenge? What kind of impact will John Cena and Seth Rollins be looking to make before the Triple Threat Match this Sunday?

Heading into RAW, one-third of the field for the 30-Man Royal Rumble Match has been revealed as Roman Reigns, Daniel Bryan, Bray Wyatt, Dean Ambrose, Rusev, Bad News Barrett, Goldust, Stardust, Kane, & Big Show have all let the world know their intentions to punch their ticket to WrestleMania this Sunday night. With more entrants expected to be announced on RAW, who else will join the Rumble and what will happen between the competitors already named?

Speaking of Daniel Bryan, the former World Champion made an impactful return to the ring on last week’s SmackDown as, after J&J Security interrupted Bryan’s match against Kane, Bryan would be joined by Dean Ambrose & Roman Reigns in the main event, where the trio emerged victorious over Seth Rollins, Kane, & Big Show. After the match was over, WWE COO Triple H informed Daniel Bryan that, on this Thursday’s SmackDown, Bryan will face Kane again, but this time, if Daniel Bryan loses, then he will lose his spot in the Royal Rumble Match this Sunday! Never ones to be short of backup plans, will The Authority go to any extra lengths on RAW to stack the deck against Daniel Bryan? Will The Authority be looking to punish the two men who came to Daniel Bryan’s aid on SmackDown, Dean Ambrose & Roman Reigns?