The Attitude era. Known to many as the period of time when the USA’s leading wrestling promotion went too far. Out was classic 30-minute matches, in were 20-minute promos, bikini contents, “hilarious” backstage humour and much more influenced by Vince Russo. But enough about that. The video game, WWF Attitude, also marked the end of an era. Released in June 1999, this was the last WWF game that Acclaim produced, before the contract changed hands allowing THQ to make the games for McMahon’s promotion. So did Acclaim go out with a bang, or with a whimper? Let’s take a look. 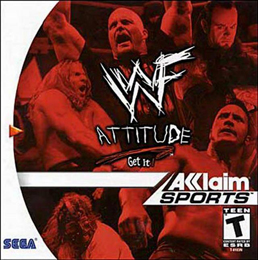 Back then, the graphics were acceptable. The characters were considered to be pretty good replicas of the superstars. However, right now the graphics look less than acceptable. Even using a PS2 and smoothing out a lot of the “jaggies”, the wrestlers themselves don’t look right. Instead of hands, they have mittens. Whoever had the idea to animate the fingers and hands as the one body part should be locked up. Look at the Smackdown! series: Steve Austin’s middle finger had to be separately animated from the rest of his hand or else you couldn’t flip people off. In Attitude, The Undertaker looks seriously weird. His face seems to be either too small or too big for the head model, meaning his facial hair takes up most of his neck and his eyes have a bug eye look to them. The arenas themselves are actually quite good, with numerous different venues to hold your matches in, the first wrestling game that I can remember that included this feature. The graphics are far from being perfect, but they did the job back then.

The audio side of Attitude is far superior to a lot of games that came out after Attitude. It even beats Smackdown! Just Bring It in the sound department. Jerry Lawler and Shane McMahon do the Play by Play. Both men have a few funny lines (Including a superb quote by Shane McMahon “He’s like a one man…er…One assed man in a leg kick…Er…What was that line again, Pops?”), but much like the predecessor to Attitude where Vince McMahon and JR did PBP, neither men have ever commentated on a WWF Show together, which takes something away from the experience as it seems less like an episode of Raw and more like a video game. A lot of the commentary repeats itself too, especially if you keep doing the same move over and over again. Each wrestler has their own theme music and a few quotes from themselves in the game, which is sorely missed in today’s wrestling games. There’s also a very handy Sound Test option, which allows you to listen to every wrestler’s music, saving you from having to buy a WWF Music CD for £12.99. Overall, the game might be old but the high quality of the audio still holds up even today.

Now we start to go downhill. The Warzone engine, while fine in its day, was brought back again. However, there are next to no changes to the way this game plays in comparison to the gameplay of WWF Warzone. I’m sorry, but if you want to create a sequel, you really have to do more than update the roster. Each character has about 5-10 standing moves, which is pretty ridiculous when you consider a lot of the matches in this game can last up to 20 minutes long. The only real update to the engine is that wrestlers now have special moves, which can only be performed, after wearing down your opponent a little. Kind of like a mini-finisher. There are a lot of puzzling moves in the game too. Guys like The Undertaker, The Rock, Steve Austin and Triple H usually tend to stick to a limited arsenal of moves. So effort has been made by Acclaim to fill their move sets up with holds the guys have never used before. Seeing Stone Cold give a Sit Out Gutwrench Powerbomb to his opponent is as strange as watching The Undertaker hit a Top Rope Big Elbow, Macho Man style. However, guys who are considered to be midcard fodder like TAKA Michinoku, Val Venis and D-Lo Brown are ignored and given one or two moves. It’s obvious Acclaim spent their time trying to make the main eventers of the WWF look great, and make the guys below them look like chumps. It’s amazing how Backstage politics can even make their way into a video game. After playing a game like No Mercy or Fire Pro, you won’t be able to play this, simply due to the lack of offence moves, slow gameplay and repetitiveness, stemming from having to go back to the same moves over and over.

The game has a nice career mode, which sees your character move from being a jobber to the stars into a real contender for the world title. However, Acclaim really screwed up in one point. They tried to make the later levels difficult. Sure, there’s nothing wrong with that. Just beef up the stats of a few main eventers. Right? No, Acclaim has taken it too far. When you get to the end of the career mode (Yes, it’s finite, it ends after you win the title), prepare to face countless 3-on-1 matches. Ignoring real life WWF (Talk about a contradiction), you’ll hardly ever fight a singles match. Aside from the flawed career mode, there’s a lot of gimmick matches to be found in the game. Some matches are great (For instance, a Hardcore 4 way dance, which is a lot of fun even today), but some are horrible. The First Blood matches usually last 30 seconds if you’re lucky. A few punches to the face and your opponent bleeds, leaving you the winner. Of course, there’s not enough variations of matches to quench your average WWE fan’s thirst for violence today, as there’s little in the way of Ladder, Hell In A Cell and TLC matches. But back then, it was a nice change of pace from the usual “Single, Tag, Cage” options.

Acclaim’s Create A Wrestler mode didn’t change a lot from Attitude, right up until the engine was dropped after ECW Anarchy Rulz. There’s a lot of clothes, hair, faces and moves for all of the wrestlers. But for some reason, the wrestlers you create don’t look at all like the wrestlers in the game. Maybe the colours are brighter, or the skin tones are dissimilar, but it’s very easy to tell which wrestlers have been created by the player, and which are already in the game. CAW modes tend not to fall in quality over the years, as if you were good at making a character a few years ago, chances are you still have the knack for it. It’s still fun to make your own personal Frankenstein and wrestle him, even if the game is poor.

Almost all of the big names in the WWF were included in the game, and the roster is still big enough to rival a lot of games from before WWF bought WCW (After that, the size of the roster exploded). However, the reason that it gets 8/10 is because there were a few big names left out. Chris Jericho is absent from the roster, as are Test, Vince McMahon, Shane McMahon, Viscera and Mideon, who were all regulars on WWF TV back then. Also, The Big Show was left out of the game due to the fact that all wrestlers are the same size, and a Big Show character who was equal in height with someone like X Pac or Jacqueline would just look too stupid, therefore he was left out.

While the actual matches themselves might not draw you back, there’s still a lot to do. The CAW is pretty good, and doesn’t take up a lot of space on a memory card, meaning you can make quite a few characters. Plus, there’s also a lengthy career mode in which you can unlock hidden characters, so that will keep you playing for a bit. Once you’ve got all the characters however, you’ll not want to play for much longer.

Overall (Not An Average)

While not being the best wrestling game ever, it was probably Acclaim’s best shot at making WWF games for many years. A few years ago, this game was revolutionary. Now it’s nothing special compared to the No Mercy’s and Smackdown!’s of this world, but it does remind you of the days that Raw would get superb ratings, and make some good TV. If you see WWF Attitude on special offer for about five pounds, then you could find worse ways to pass a weekend.