It’s Payback time, so what surprises do WWE have in store for us in Chicago? Join me in taking a look at the card and what we can expect tonight. 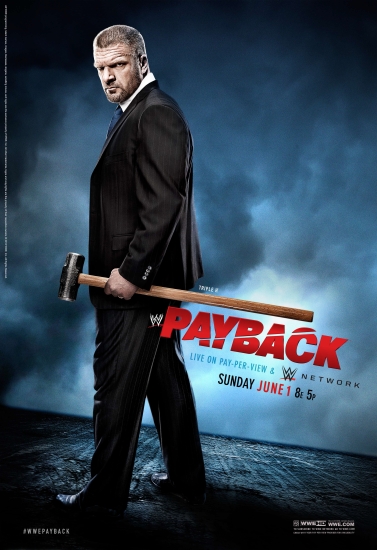 Prepare yourself. The CM Punk chants are coming. Chicago is a notoriously noisy smark crowd, so expect some kind of show hijacking to take place tonight. Not that it’ll matter a jot of difference, because we can be pretty certain now that CM Punk isn’t coming back. On top of that, WWE have been doing a lot more wrong than right recently, so you can see why I’m not overly enamoured with the prospect of sitting through this PPV. Let’s get this over with, but be warned, I’m gonna be bitching a hell of a lot during this article…

As much as I want to hate on this, even I have to admit that their last WeeLC match was awesome. Like, ridiculous amounts of fun. The main problem here is WWE are doing what they always do. “Oh, so you liked that? Well here it is again, and again, and again until you’re sick of it.”

Can someone explain to WWE that sometimes less is more? Or that they don’t need to beat us about the head with something, because we do comprehend subtlety and nuance? I know this doesn’t really have anything to do with the Torito & Hornswoggle match, it’s more indicative of the state of WWE as a whole.

I’m trying to find something good to say about this match, but I just can’t. Sorry, I’m bummed out about wrestling, and I’m having a hard time trying to be enthusiastic about anything at the moment, let alone two tiny guys fighting over who gets to keep their hair or mask. Let’s just get to the predictions, shall we?

Who I think will win: Most likely Torito. I can’t see them unmasking the little bull this early on, so it looks like Hornswoggle’s getting his head shaved.

Oh look, it’s another person from NXT who they’ve stripped of everything that made them so successful in developmental. I loved Page in NXT, and I thought the whole “anti-diva” gimmick was brilliant. Finally a women’s wrestler who was more concerned with smashing faces than looking good. A woman with aggression, fire, passion and a mean streak a mile wide. What’s not to like?

And then they moved her up and effectively removed all of that. They glammed her up by slapping make up all over her, they removed her mean streak, and they’ve had her pretty much fluke her way through her first couple of months.

I want to see the Paige we had in NXT. The Paige who wouldn’t stand for any cr*p from anybody. The Paige who dominated the women’s division, kicking asses and taking names. Is that too much to ask? That they just let the folks they’re moving up from NXT be the person they were in NXT if it was successfully over with the crowd?

Man, I’ve bitched again instead of actually talking about the match, but this is obviously just filler for Paige until the inevitable return of AJ Lee, so there’s not really anything to talk about. Sure Alicia Fox going crazy was kind of fun, but you know it’s just going to be forgotten about as soon as this little feud is done with. But that’s another problem to discuss at another time.

Who I want to win: Paige. In domineering fashion, please.

Who I think will win: Paige, but I’ve got a sinking feeling it’s gonna be yet another flukey win with has no real benefit for anybody involved.

WWE don’t seem to be able to make up their mind with Cesaro. They want us to boo him as a heel, yet they continue to allow him to hit moves like the Cesaro Swing which are over like gangbusters with the fans in the crowd. People want to like Cesaro, yet WWE are refusing to acknowledge this in the slightest.

Meanwhile Sheamus is another of those things that WWE seem insistent on ramming down out throat. He’s the midcard Cena right now, with his constant overcoming the odds and being marketed pretty much directly at the kids. But as far as I can tell, the fans are starting to get a little bit sick and tired of it. Did you hear the boos when Sheamus took Dean Ambrose’s title away?

So yeah, we should get another hard-hitting match between these two, and I’m all for that. I just feel like WWE are once again trying to tell us what we want to see, rather than listening to the reactions of fans and going along with that.

Who I want to win: Cesaro.

Who I think will win: Probably Sheamus, overcoming the odds and doing it for the kids. Yeesh.

Rumour has it that Vince is big on BNB right now. Apparently Vinnie Mac loves him some Barrett, so expect to be seeing a lot more of him and his IC title reign. Only problem there is that generally that means that Vince is gonna concentrate the full efforts of creative on Barrett and usually that’s not a good thing.

Once again, this just smacks of filler while they think of a suitable feud for Barrett. Not to take anything away from Van Dam, but does anyone seriously think that he’s gonna win this match? RVD is being used as a steady hand to have solid matches with guys, but we can be fairly certain that WWE aren’t going to put a title on him. That’s not what he’s currently employed for.

Jeez, I’m really the harbinger of doom this month, aren’t I?

Who I want to win: Barrett. He’s been really entertaining lately, so why not keep the title on him? It’s not as if the belt even matters anymore.

Who I think will win: Barrett. It’s yet another filler match for the IC champion, because nobody knows how to make the title relevant and prestigious anymore.

This is the one that makes me really mad. WWE are ruining my second favourite thing about the whole company at the moment by overkilling Bray Wyatt. There is absolutely no reason to have long, protracted Bray Wyatt promos on absolutely every show, and (quite rightly) people are starting to get burned out on the Eater of Worlds. I could quite happily do without hearing “He’s got the whole world in his hands” for a few weeks, because it’s (yet another) one of those things that WWE are beating us about the head with.

It’s almost as if WWE can’t allow things to progress naturally and organically anymore. They have to rush through everything, literally forcing it on us week after week until we’re burned out and fed up. Well, I am anyways. Over the last 6 weeks, we’ve had what should’ve been the equivalent of a solid 4-6 months of Bray Wyatt work crammed into a short period of time.

If anything, Bray would probably benefit from not being on the shows so often. Having him appear and churn out the same kind of prolonged promo week after week is probably doing more harm than good right now. They’re exposing Bray and removing any mystique the character may have had.

Personally, I’d use Bray sparingly. Only have him turn up on shows every couple of weeks. The opening Wyatt Family sting should be a genuine surprise, not something you’re expecting to happen week after week

I’m just really annoyed that something that started out being so cool is being ruined (because there’s no other word for it, WWE are RUINING it) because WWE are idiots who find something cool and repeat it ad infinitum until it’s no longer cool or interesting, it’s just the norm. It’s like they don’t want anyone to stand out, but then I guess “no-one is bigger than the WWE”. Oh well, as long as WWE continues to make money for the shareholders, then we’ll just have to get used to watching this tame, homogenised rubbish. Or find something better.

Who I want to win: Bray. But I’m still not confident that WWE aren’t going to ruin him, which is crying shame. Bray needs to win clean, no weird kids with awful voice effects, no 3 man beatdowns with the rest of the family, just Bray beating Cena clean. Finally.

Who I think will win: I really hope it’s not Cena, but I think it could be. It would be completely the wrong decision, but when has that ever stopped them?

Luckily there’s one thing still in WWE that gives me a tiny glimmer of hope. The Shield. Thankfully there’s still at least one person in WWE who understands how to book and build a team sensibly over time.

This whole match is geared towards Roman Reigns. Look at the build. Evolution has essentially said they’re looking to take out the big dog first, it took every finisher Evolution could throw at Reigns to keep him down during the beatdowns they’ve suffered, and the fact this is an elimination match only leads me to one conclusion.

Reigns is gonna end up in a 3-on-1 situation in this match…and I think he’s still gonna win anyway. Tonight could be the night that WWE fully pull the trigger on Roman Reigns. They gave him the Royal Rumble elimination record, they’ve kept him looking strong ever since, tonight could the night that Reigns goes full on Beast Mode and takes down Evolution single handedly.

The one thing that reassures me about that, is that everything we’ve wanted to see from The Shield has happened. Whoever is booking them is obviously smart to what fans would like, and is determined to give that to them, so it seems the logical outcome of this match is for Reigns to go over solo to lead to the inevitable Reigns vs. Trippers match, most likely at Summerslam. And you know what? I’m okay with that.

Who I want to win: The Shield.

Who I think will win: The Shield, with Reigns coming back from 3 on 1 to be the last man standing. And it’s gonna be awesome.

And there you have it. I know I’ve bitched a LOT in this article, but the current state of WWE is really starting to grate on me. I’m hoping they can go some way to reigniting my love of pro-wrestling with this PPV, but I’m not holding my breath.

But what do you think? Do you share my feelings of apathy and ennui regarding WWE? Why not let me know in the big ol’ comments box below? Or how about coming to see us at TalkWrestlingOnline and sharing your thoughts there?

I’m off to try and stop being such a grumpy pants before the next PPV, so enjoy the show (as much as you can) and I’ll see you all next time!