WWE Raw Recap: What it means for Extreme Rules and beyond

Heading into Extreme Rules this Sunday WWE is heating up, on Raw we saw some very interesting angles develop.

The most interesting one, rather predictably involved Bray Wyatt giving John Cena one of the most entertaining (and spooky) wrestling promos in recent memory. It would be a damn shame for Wyatt to lose at Extreme Rules now – he has the momentum, the crowd will love to sing “he’s got the whole world in his hands…” for years to come, that’s a definite. It just depends whether WWE’s writers want to push him further. Having children work with Wyatt on that promo was an absolute stroke of genius, it worked amazingly well. This angle is giving Wyatt a great push, and it seems to be rejuvenating Cena’s character also. 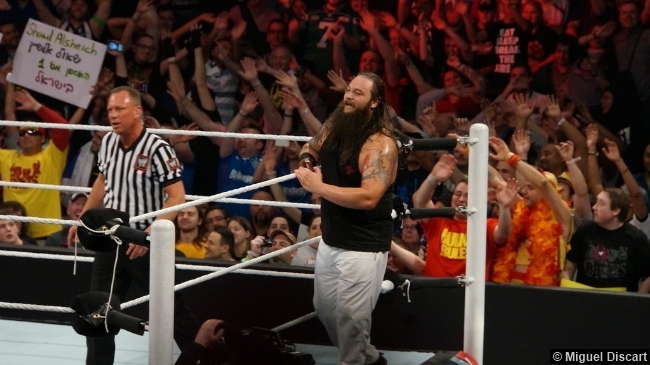 Next up we had The Usos versus RybAxel, with the Usos retaining the championships – am I the only one that thinks that RybAxel could be used so much better? Admittedly, in this match the pair are getting a shot at the titles, but let’s face it, they’re not a great tag-team, far from it. Both need re-packaging as singles competitors, but as it stands, Ryback is the odds-on favourite to do well when they do split. If used in the right way, he could certainly be a big money draw for the business. It’s just finding out the right way to use him. Axel meanwhile, will be left as a mid-carder. Anyway, I digress. The tag team titles won’t be defended at Extreme Rules, I would expect RybAxel to be finishing up their run as a team over the coming months off the back of these defeats. Though, it’ll be after Cody and Goldust split up!

Titus O’Neil and Sheamus followed up. Titus is without doubt one of the company’s brightest break-out stars, and it’s great to see him getting a push against a guy like Sheamus. Neither of these athletes currently figure in a match at Extreme Rules this year, there within lies a huge issue. Sheamus is a top star that has been pushed down to the mid-card, there’s lots of talk about a heel turn for the man, I for one really hope that happens post Extreme Rules. There’s a level of intensity to Sheamus that WWE has been missing for a very long time (remember his battles with HHH?), over the coming months, fans should expect him to be mowing down heroes like John Cena to further develop him as a heel character. It’s what’s best for business. 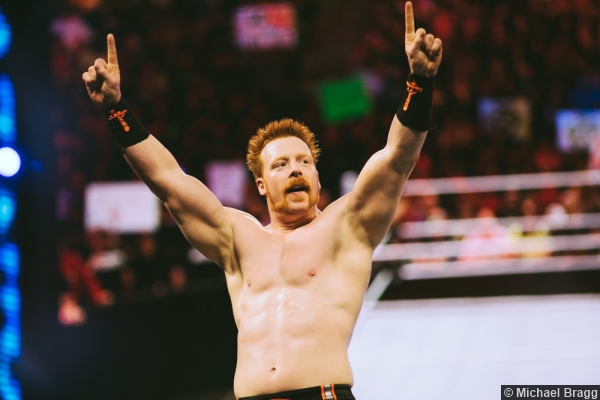 Dolph Ziggler and Damien Sandow should be top stars in WWE. Should. They’re not though, while the fans lapped up the segment on Monday which saw Sandow dress up as Magneto while Hugh Jackman (Wolverine from the X-Men movies) and Ziggler did a number on him, it was – in reality – pretty bloody ridiculous. Ziggler and Sandow are criminally under-used talent, and it’s a real shame that they aren’t being booked better – a heel stable together with The Miz, Zack Ryder and Sandow was rumoured for a while, and that’s something I’d like to see before we round out this year. Though, if there’s a series of good things to come out of this week’s events, I am looking forward to some quality Ziggler versus Sandow matches coming up.

In the following match, we see Cesaro face Swagger. Cesaro as a Heyman guy is excellent. WWE is living in Heyman’s world at the moment, and it’s not the other way around. Anyone that joins Heyman now is going to live off the eternal buzz of Lesnar beating The Streak. Unfortunately, Swagger is the buzz’s next victim. Cesaro is riding a wave, and a World Championship is on the way.  In their Extreme Rules encounter (which also features the recently returning RVD), expect Cesaro to come out on top, and further cement a claim for main event status.

Cody is bested by Alberto Del Rio in the next match as he taps to the Cross-Armbreaker, which follows with Cody shoving Goldust away. This is probably one of the most important angles for WWE to develop at the moment, despite neither athlete getting a match at Extreme Rules. The whole Goldust/Cody Rhodes feud will be really interesting to watch; Goldust versus Cody has been teased for such a long time, now it looks like it may happen before the year is out. The promos between these two will be absolute gold…pun intended. Expect that, when these two do meet, Cody will take the win, and be elevated towards the main event. Goldust is a sure-fire Hall of Famer, that’ll probably happen for him in the next few years. We’ll have to wait and see… 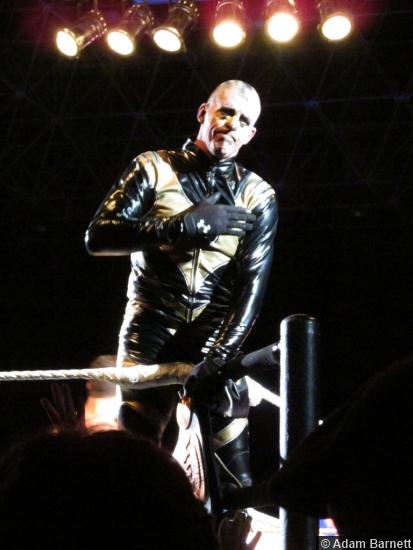 Alexander Rusev went up against one of his two opponents at Extreme Rules, Xavier Woods. Both of these guys are supremely talented, and I’m very excited to see how both careers develop in the very near future. In this match, Rusev had Xavier finished before R-Truth came to save him and attack Rusev. It’s going to be a squash of a handicap match (in favour of Rusev) at Extreme Rules, which is unfortunate, given the talent of both Truth and Woods, but it needs to happen to further cement the power and reputation of “The Bulgarian Brute”, who will without question be given a run with a belt – possibly Intercontinental by the end of this year.

Before the two team’s respective mascots go up against one another in the WWE’s first ever Wee-LC match at Extreme Rules, Los Matadores (who are of course, flanked by El Torito) and 3MB (who have Hornswoggle behind them) fought it out with 3MB picking up a rare win. I’ve often thought there were better ways to re-package Primo and Epico than Los Matadores, but the WWE Universe does love a silly gimmick. Still, it’s nice to see Hornswoggle back! 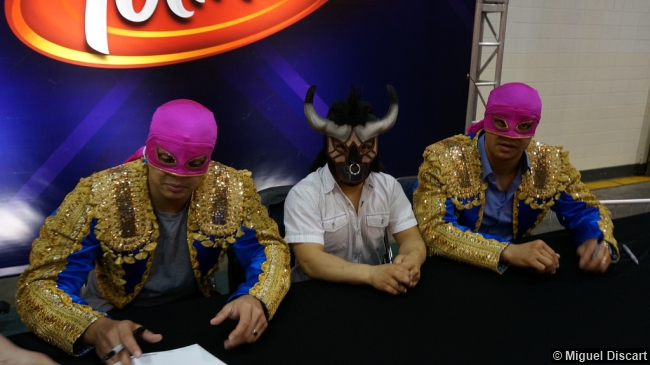 After a lengthy segment that saw Daniel Bryan and Stephanie McMahon argue about the injuries suffered by him last week at the hands of Kane, Stephanie in an attempt to make it up to Daniel, makes a match that sees his wife (Brie Bella) get a shot at the Divas title later on in the night. This was really well done, Stephanie is better on the mic as a master manipulator than she has ever been – Daniel rallies the fans behind him throughout and is ever-confident that he will best Kane at Extreme Rules. It really is incredible to see how much his character has developed over the last few years. Incredible stuff.

Anyway, in the Bella versus Paige match, D-Bry is in his wife’s corner, when Kane climbs through a hole in the ring, all hell – yes, pun intended again, breaks lose. Kane tries to grab at Brie and Bryan fights Kane off before getting chokeslammed. Really, this whole angle has been handled rather well. While a tonne of people have a problem with Kane being Bryan’s first challenger after WrestleMania, I think it’s a rather good idea. Kane is due one last run as an unpredictable and dominant player in WWE, while he may not win another championship, he will still be a force to be reckoned with, whether that’s working as part of The Authority, or against it. While Bryan will doubtless win their match at Extreme Rules, I for one am excited about what will happen for Kane after the dust has settled on the PPV. 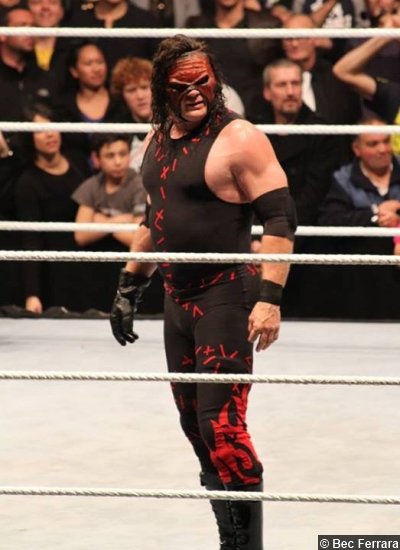 Next we have Preston’s finest, Bad News Barrett going up against the aforementioned RVD and becoming the number one contender for the white belt. Barrett’s dominance at the minute is setting up for an Intercontinental championship win this coming Sunday. Barrett bested RVD on Raw, he looks set to skyrocket in popularity this year with this big push – apparently he’s a favourite with the boss, so that can’t be erm….bad. In any case, it’s bad News for Big E. About bloody time.

The next segment of the night was pretty damn cool. Ric Flair returns during a face off in the ring between The Shield and Evolution, Flair proceeds to list great things that he sees in these athletes, while Batista, Orton and HHH assume that Flair is talking about them, his attention is in fact on The Shield.  The main event is Reigns vesus Orton which descends into madness once everyone from both sides gets involved. With a Flair endorsement, it looks like The Shield are set for a win this weekend, unless the split in the group is to occur sooner – perhaps Ambrose is the weak link ready to turn on Rollins and Reigns, or maybe (and more likely) both members turn on Reigns. Regardless, it’s going to be exciting to see what happens this weekend and the fall-out. 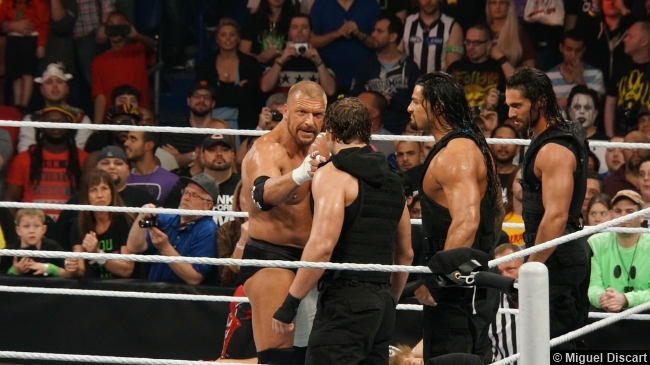