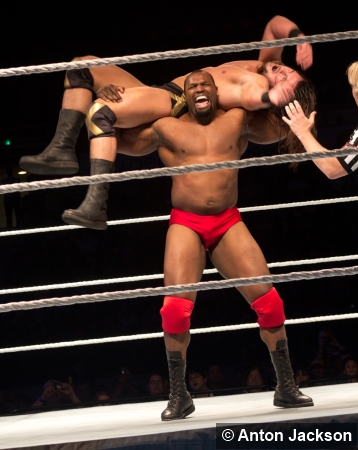 Ezekiel Jackson debuted on the July 18, 2008 episode of SmackDown as the bodyguard of The Brian Kendrick, but Ezekiel’s first major push would come after he was drafted to ECW. Following a rivalry with Vladimir Kozlov and a partnership with Kozlov and William Regal, “Big Zeke” would get a singles push and on the final episode of ECW on February 16, 2010, Ezekiel defeated Christian in an Extreme Rules Match to become the ECW Champion, a championship that was retired after the show was over.

Ezekiel would then make his way back to the SmackDown brand, making his return on March 5, 2010. However, a month later, Ezekiel would be sidelined with a quadriceps injury that would keep him out of action for up to six months. While he was injured, Ezekiel was drafted to RAW and, on October 10, Ezekiel would make his return as he joined the RAW brand for that year’s Bragging Rights event. A couple of months later, Ezekiel was drafted back to SmackDown and, in early 2011, Ezekiel would align himself with Wade Barrett, Heath Slater, & Justin Gabriel, a group that would become known as The Corre. In May, the group would split up and it would spawn a feud between Ezekiel Jackson and Wade Barrett over the Intercontinental Title. On June 19 at the Capitol Punishment pay-per-view, Ezekiel would defeat Barrett for the Intercontinental Title, a championship he would hold for nearly two months before being defeated by Cody Rhodes. After a failed attempt to regain the title and a brief feud with Cody Rhodes and Ted DiBiase, Ezekiel would take part in the 2012 Royal Rumble Match. Ezekiel would eventually start competing on NXT before another injury would sideline Ezekiel Jackson in mid-2012.

After nearly a year on the shelf, Ezekiel would return at a non-televised live event during WrestleMania Axxess in April 2013 before disappearing yet again. In January of this year, Ezekiel revealed that he was going to have a hernia surgery. Ezekiel Jackson’s last appearance on WWE television was on the May 16, 2012 edition of NXT.

What do you think of Ezekiel Jackson’s departure? Post your comments in the box below.