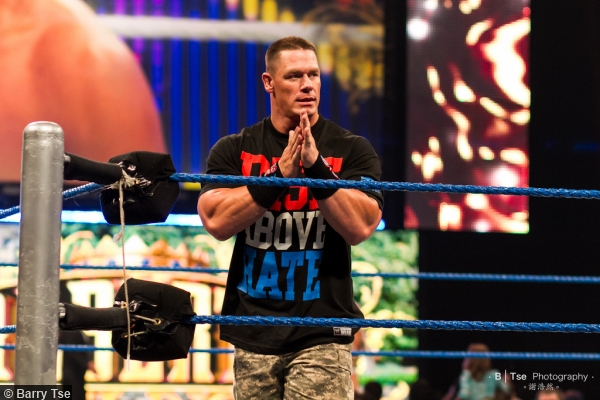 Also on SmackDown, new #1 Contenders for the WWE Tag Team Titles would be decided as The Real Americans, 3MB members Jinder Mahal & Drew McIntyre, Rybaxel, and The Shield’s Dean Ambrose & Seth Rollins would all compete in a Fatal 4-Way Tag Match with the winning team earning a future shot at The Usos’ WWE Tag Team Titles!

After The Shield defied and attacked him on RAW with a three-man powerbomb, SmackDown kicks off with the Director of Operations, Kane, who shows the “end of the Yes Movement” from RAW, when WWE COO Triple H set Daniel Bryan up for a heinous assault, where the COO annihilated his WrestleMania opponent, who was handcuffed and unable to defend himself. Triple H smashed the skull of Daniel Bryan with a steel chair and delivered the Pedigree in the center of the ring. After showing the brutal actions of the COO, Kane says that what happened to Daniel Bryan on RAW is the fault of the fans. Kane continues, saying that Daniel Bryan and the fans learned a valuable lesson on RAW, that no one is “bigger” than The Authority. The Director of Operations then says that “some people are just better than others”, saying that The Authority is “better” than Daniel Bryan and they are “much better” than the fans, screaming at the fans that they got what they “deserved” on RAW. Kane then composes himself, reading a statement that Triple H instructed him to read. The statement says that the COO “regrets” that Daniel Bryan pushed him and his wife too far and that Triple H hopes that the fans can understand that there must be “respect for authority”. Kane then exits the ring, staring daggers at Fandango & Summer Rae on his way to the back.

The opening match of the night would see Fandango, with Summer Rae in his corner, going one-on-one with one-half of Los Matadores, Fernando, with Diego & El Torito in his corner. During the match, El Torito would chase Summer Rae around the ring and Summer would get on the ring apron in an attempt to escape the mini-bull mascot. This would draw Fandango’s attention and Fernando would capitalize with a roll-up to pick up the win.

Two of the thirty competitors who are confirmed for the Andre The Giant Memorial Battle Royal at WrestleMania would face off on SmackDown as “The Show-Off” Dolph Ziggler would go one-on-one with Damien Sandow. After colliding with the steel steps early on in the match, Dolph Ziggler would struggle for the majority of the match, but Dolph would battle back, hitting the FameAsser on Damien Sandow, pinning Sandow for the win.

Then it was time to determine the new #1 Contenders for the WWE Tag Team Titles as The Real Americans, with Zeb Colter in their corner, Rybaxel, 3MB’s Jinder Mahal & Drew McIntyre, with Heath Slater in their corner, and The Shield’s Dean Ambrose & Seth Rollins, with Roman Reigns in their corner, in a Fatal 4-Way Tag Match where the first team to score a pinfall or submission will become the #1 Contenders for The Usos’ WWE Tag Team Titles. During the match, Heath Slater would try to trip up Seth Rollins, distracting Rollins until Roman Reigns comes out of nowhere with the Spear to Slater. After a near-fall in the ring, all hell breaks loose with all four teams brawling in and out of the ring. Kane then emerges, targeting Roman Reigns as Kane and Reigns battle up the ramp before Roman Reigns is blind-sided by The New Age Outlaws! A sinister plan then begins to unfold as, in the ring, Rybaxel and The Real Americans have isolated Dean Ambrose & Seth Rollins as Cesaro hits the Neutralizer on Ambrose while Ryback lays Rollins out with Shell Shocked! On the stage, Roman Reigns tries his best to fight back against Kane & The New Age Outlaws, but the three-on-one disadvantage would overwhelm Reigns and, with Road Dogg & Billy Gunn holding Reigns, Kane would put Reigns down with a big boot to the skull. With Reigns out on the stage, Kane & The New Age Outlaws make their way to ring and, after Rybaxel & The Real Americans exit, The New Age Outlaws beat down the helpless remains of The Shield with Billy Gunn hitting the FameAsser on Seth Rollins and Kane planting Dean Ambrose with a chokeslam. Roman Reigns then tries to crawl down to the ring to help his teammates, but The New Age Outlaws beat Reigns down, dragging Reigns to the ring and feeding him to Kane, who puts the final nail in the coffin with a thunderous chokeslam.

With Divas Champion AJ Lee a guest on commentary, with Tamina Snuka by her side, The Bella Twins would face Natalya & Summer Rae in tag team action. Discension between Natalya & Summer Rae would lead to their downfall as Brie Bella takes both of them out with a missile dropkick before hitting the Bella Buster on Natalya, pinning Natalya to pick up the win for her and her sister.

Backstage, Director of Operations Kane congratulates Rybaxel and The Real Americans on a “job well done”, granting both team a future shot at the WWE Tag Team Titles! After Rybaxel and The Real Americans exit, 3MB still stands there, claiming that they helped Kane dispose of The Shield too. While 3MB does not get a shot at the WWE Tag Team Titles, the Director of Operations does grant Heath Slater, Jinder Mahal, & Drew McIntyre entry into the Andre The Giant Memorial Battle Royal. After 3MB leaves, Kane is confronted by The New Age Outlaws as Kane hugs both Road Dogg & Billy Gunn and Kane says that he knew that he could count on them and Road Dogg says that the Director of Operations can always count on them.

Then it was time for the main event as, two weeks before he faces Bray Wyatt at WrestleMania, John Cena would go one-on-one with The Wyatt Family’s Luke Harper, with Bray Wyatt & Erick Rowan in his corner. In the end, it was John Cena hitting the Attitude Adjustment on Luke Harper, pinning Harper for the win. As soon as he gets the three-count, Cena would slide out of the ring, narrowly escaping the grasp of Bray Wyatt & Erick Rowan.