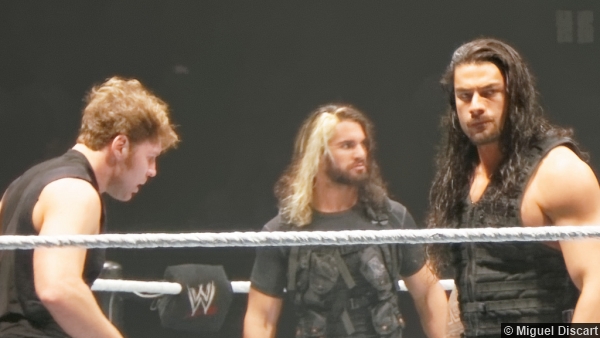 The Hounds Bite Back.

The 760th edition of WWE Friday Night SmackDown came to you from the Verizon Arena in Little Rock, AR. After Daniel Bryan’s “Occupy RAW” movement where Bryan and his Yes Movement supporters filled the ring and ringside area, refusing to leave until Triple H accepted his demands for a match with the COO at WrestleMania, the champion-turned-executive has begrudgingly accepted the challenge and will face Daniel Bryan in just over three weeks on “The Grandest Stage of Them All” with the added stipulation that, if Daniel Bryan wins, he will be added to the WWE World Heavyweight Title match that very same night! With his match against Daniel Bryan set, WWE COO Triple H would make his first public appearance since his blow-up on RAW to address the match with Daniel Bryan, as well as the Yes Movement that led to the match being made.

After he was knocked out by Big Show in a tag team match last week, SmackDown would feature a collision between two longtime rivals as The Authority’s Director of Operations Kane would go one-on-one with “The World’s Largest Athlete” Big Show!

After the Daniel Bryan-led “Occupy RAW” movement forced the hand of Triple H, resulting in a match with Daniel Bryan at WrestleMania, where, if Daniel Bryan wins, he will get added to the WWE World Heavyweight Title match later that same night, SmackDown kicks off with WWE COO Triple H. The COO says that, because of the fans, Daniel Bryan is not in the arena tonight. Triple H then says that he is “happy” that they had their “moment” and, if they were in Memphis for RAW, they would have loved to be a part of the “Occupy RAW” movement. The COO continues, saying that he is going to “end” the Yes Movement and that he “protected” Daniel Bryan since SummerSlam, explaining that, if Bryan would have succeeded, he would have been fed to the “sharks” of the WWE. Triple H then says that the Yes Movement provides hope for the fans and their “pathetic lives” and Daniel Bryan is exactly like the fans, he is just not “good enough” to succeed. Triple H then vows to “crush” their hopes and dreams at WrestleMania by putting an end to Daniel Bryan and the Yes Movement, proclaiming that there is no “happily ever after” and, at WrestleMania, he will “bury” Daniel Bryan! Moving on, the COO brings Damien Sandow to the ring, who refused to compete on RAW while Daniel Bryan and his slew of Yes Movement supporters filled the ring. Triple H says that, unless Damien Sandow apologizes to him right now and promises that it will not happen again, there will be some severe consequences. Sandow gives Triple H his sincerest apology and the COO says “no harm, no foul”, saying that SmackDown General Manager Vickie Guerrero has booked Damien Sandow in the opening match of the night and he has a good idea who Vickie chose as Sandow’s opponent. A smile then comes across the face of Triple H as The Shield’s music hits and the trio makes their way to the ring.

As Zeb Colter struggles to keep Cesaro & Jack Swagger on the same page, The Real Americans were in action on SmackDown as Cesaro & Swagger, with Zeb Colter in their corner, face Goldust & Cody Rhodes. The match would come down to a battle of one-upsmanship between Cesaro and Jack Swagger as both men would take turns trying to out-do the other, nearly costing them the match. A few minutes later, Cody Rhodes would use a backslide to roll Jack Swagger up for the win. After the match, The Real Americans would take their frustrations out on Goldust & Cody Rhodes as, after Cesaro takes Goldust out on the outside, Cesaro & Swagger would repeatedly ram Cody Rhodes’ shoulder into the steel ring post. Fortunately for the Rhodes brothers, The Usos would make the save, chasing The Real Americans out of the ring.

With a match against John Cena at WrestleMania awaiting him in the very near future, the leader of The Wyatt Family, Bray Wyatt, with Luke Harper & Erick Rowan in his corner, would go one-on-one with Kofi Kingston on SmackDown. In the end, it was Bray Wyatt hitting the Sister Abigail on Kofi Kingston, pinning Kofi for the win.

Fresh off of her successful title defense against Natalya on Main Event, Divas Champion AJ Lee would be a guest on commentary as her bodyguard, Tamina Snuka, went one-on-one with Nikki Bella, with Brie Bella in her corner. During the match, AJ Lee would get out of her seat to try and attack Brie Bella, but Brie would get the better of AJ. However, seeing AJ in trouble would draw Tamina out of the ring and ultimately lead to her defeat as Nikki catches Tamina coming back into the ring, hitting the bodyguard with the Rack en route to picking up the win.

As their long-standing rivalry begins to re-ignite, “The Show-Off” Dolph Ziggler would go one-on-one with “The Mexican Aristocrat” Alberto Del Rio on SmackDown. In an intense back-and-forth match, Dolph Ziggler and Alberto Del Rio would give it their all, but the story of the match was Dolph’s refusal to accept defeat as Dolph Ziggler would take the best of Del Rio before hitting the Zig Zag, pinning Del Rio for the hard-fought victory. After the match, Dolph Ziggler tells interviewer Renee Young that he is throwing his hat in the ring for the Andre The Giant Memorial Battle Royal at WrestleMania, vowing that he will have his “WrestleMania moment” on April 6 in New Orleans.