In the WWE Universe, each Monday night gets bigger as we inch closer to Wrestlemania. Following last week’s controversial event in Chicago and all that went down, this episode was sure to be huge, good or bad. The Yes movement was in full effect as Monday Night Raw invaded the FedEx Forum in Memphis, Tennessee.

Wrestlemania 30 host the Immortal Hulk Hogan kicked off the show with an in-ring promo. Hogan delivered the big news WWE announcers had been hyping up over the past week, which turned out to be a ginormous match dedicated to one of his greatest Wrestlemania opponents – the late great Andre the Giant. He introduced the “Andre the Giant Memorial Battle Royal”, a 30-man over the top battle royal that will award a robust, spiffy-looking trophy to the winner. The Hulkster could barely contain his excitement throughout the segment, but just as he prepared to sign off, an uninvited guest showed up.

John Cena came out to join Hogan in the ring and the boo birds followed. Cena gave props to man he shares so many similarities with and revealed that he would be the first superstar to throw his name in the hat for the Wrestlemania battle royal. This feelgood moment doesn’t last long, though, because out went the lights and out came the Wyatt Family to interject.

In delivering one of those cute little cryptic messages like he does, Bray dissed both men for being corny, catchphrase-spitting good guys, while painting himself as some sort of God-like savior. Tired of the twisted gibberish, Cena explained that he might not be able to participate in the battle royal because he’s challenging Bray Wyatt for a one-on-one match at Mania! April 6 is still a couple of weeks away but thankfully, we didn’t have to wait that long to finally see some action. First up: John Cena vs. Erick Rowan.

Things started out rough for Cena. In fact, he was on the receiving end for the majority of this short, hard-hitting match. Luckily for Cena, Hogan was still at ringside and thus in his corner. It appeared to be the power of Hulkmania that willed Cena to shake off the constant shellacking, and steal the victory with a roll-up. Following the match, we were teased to a physical encounter between the Wyatts and two “Real American” heroes, but Bray pulled the troops back. You didn’t really think Hogan was going to lay the smackdown, now did you brother? Maybe in a few weeks.

Before we could get to another match, WWE’s version of action unfolded in yet another promo. Triple H and Stephanie McMahon, in particular, had plenty to say about the situation with Daniel Bryan. The chairman’s daughter apologized for what happened last week, but demanded that Bryan return that apology or suffer the consequences. While the Authority segments often leave a lot to be desired, I think Steph has been playing the role of corporate witch with a “B” in place of the “W” to a tee. She’s calm, collected, completely composed as she belittles Bryan with a smile on her face. The riled up response she receives from people in my own personal fan circle lets me know she’s executing that role to perfection.

The next segment to catch my eye featured the Hounds of Justice and Corporate Kane backstage. Forget Kane for a second. If you recall, the last time we saw the Shield, all three members were in the middle of the Smackdown ring literally smacking out their differences last Friday night. Apparently, Kane doesn’t believe in the mended  Shield because he referenced their trust issues and decided to put their cohesiveness to the test in a match against Cody Rhodes and Goldust. Though it wasn’t surprising for him to pair Reigns and Rollins, it was certainly interesting considering everything that went down over the past week.

Big E has recently been driving the wedge that will lead to the inevitable split of the Real Americans. With Zeb Colter and Cesaro in his corner, Jack Swagger appeared confident in doing something neither Real Americans could do last week, and that was defeat the Intercontinental Champion. I wasn’t surprised in the least to see Big E take the win with a little outside interference from his opponent’s partner. At the wit’s end of his rascally whiskers, Zeb was finally able to get his guys to settle their differences with a post-match handshake, but even then it was apparent that this tandem is on the verge of violently imploding. While the Real Americans would make great tag team champions, I’m more anxious to see what kind of damage Cesaro can do on his own.

The legendary Undertaker graced us with his presence this past Monday night. Taker got plenty of pop from the crowd, but couldn’t even get a word out before Paul Heyman came out on stage. I wish I could tell you this was an awesome exchange, but it was quite lame, frankly. Heyman claimed that Brock Lesnar will break the streak, while the Undertaker promised that Brock will Rest In Piece. I’m expecting at least one more encounter with these guys before Wrestlemania, likely one that puts some momentum in Lesnar’s corner. Sadly it wouldn’t happen on this night.

We got our match of the night in the Shield against the Rhodes brothers, a fierce tag team rivalry renewed. You would never know that there was any dissension in the group because Rollins and Reigns functioned like a well oiled machine from the opening bell. Seth looked especially solid when he blocked both Cross Rhodes, and a Disaster Kick to counter Cody with the Tyler Black-style bucklebomb that set up the win. After the match, Dean Ambrose came to celebrate the victory with his comrades, painting a picture that shows all is well in the Shield – for now.

It just wouldn’t be Raw without a Daniel Bryan appearance. Wrestling’s most over superstar came out in response to Stephanie’s promo and demand to apologize. At times, it was like watching an educational program for kids as Bryan prompted the crowd to bark away with “NO!” and “YES!” chants. This segment got ultra interactive when several fans donning Daniel Bryan shirts came to the ring to show the solidarity of the Yes Movement. He essentially let us know that he wasn’t apologizing and wouldn’t leave the ring until Triple H granted him a match at Wrestlemania.

Accompanied by Stephanie, Triple H came out and addressed Bryan from the stage. We got far too much verbal back and forth between these two with Bryan orchestrating more “YES!” and “NO!” chants from the interactive fans, and the Game continually avoiding his push for a match. In a rather interesting development, the group of Bryan fans multiplied to fill the ring and ringside area while these back and forth shenanigans threatened to spill over into the next match.

Finally, after some persistent negotiating, Daniel Bryan got what is equivalent to having his cake and the luxury to enjoy a slice later. Not only does he get a match with Triple H at Mania, if he wins, he gets added to the WWE World Championship match with Orton and Batista. Just like that. Hunter not only bends, he breaks with enough pressure from the WWE Universe. I (and others) called this being a possibility going all the way back to the Royal Rumble due to the Batista response. Still, it’s crazy to know that fans have such an influence on WWE booking. Crazier because I’m not so sure that’s a good thing. 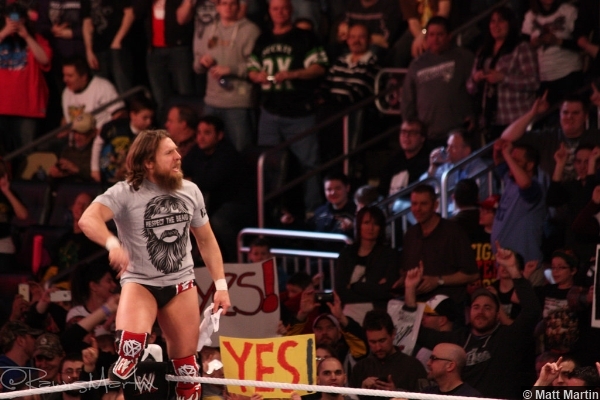 Sheamus beat Christian again, but who cares? The main event featured unlikely duos Daniel Bryan and Big Show squaring off against former Evolution partners Randy Orton and Batista. You might think Orton and big Dave hit the ring with a game plan because they isolated Bryan early on, staying on him with quick tags, and preventing him from making his own. They even managed to take control of Big Show after his fire from the proverbial hot tag died down. In the end, however, it was an accidental spear from Batista that put Bryan in position to nail Orton with a flying knee and secure the win. Raw faded to black with Daniel Bryan celebrating in the view of the Wrestlemania logo above and the crowd maniacally chanting “YES!” in the background.

This episode of Raw had a little too much promo action for me. Certainly not boring, but too much talking in circles. Although I’m genuinely a fan of Daniel Bryan, the whole “YES” culture started turning my stomach in violent knots months ago, and I wouldn’t mind seeing it dialed down a notch or two. Let the guy talk without all the mindless crowd participation. With Bryan pretty much a shoe-in for a title shot, I’m hoping we can see less promos from the Authority, and a bit more focus on other Wrestlemania stories moving into the big show.