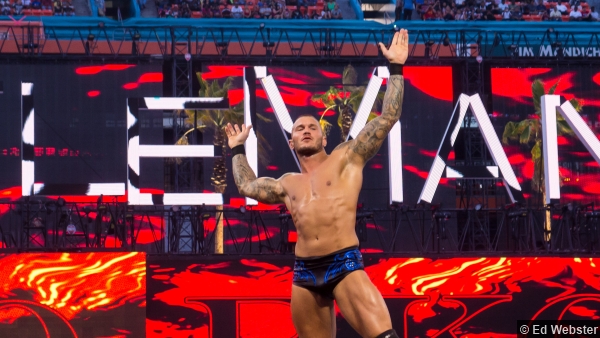 Nine nights before Battleground, the 736th edition of WWE Friday Night SmackDown came to you from the BMO Harris Bradley Center in Milwaukee, WI. Following his recent non-title victory over The Shield’s Dean Ambrose, Dolph Ziggler would get the opportunity to put a major dent in The Shield as “The Show-Off” would challenge Dean Ambrose for the United States Championship on SmackDown!

SmackDown kicks off with the Chief Operating Officer of the WWE, Triple H, who makes his way to the ring. Triple H says that he has been hearing a lot about “favoritism” and an “abuse of power”, but Triple H says that there are a lot of Superstars who would rather blame management than own up to their own “failures”. Triple H then says that, even when he and his wife do what is “best for business”, the fans still do not approve. Triple H continues, saying the 11-on-3 Handicap Elimination Match on RAW was made because it was “best for business”. The COO is then interrupted by the man who was knocked out by Big Show on RAW at the behest of Stephanie McMahon, The Miz, who makes his way to the ring to confront Triple H. Triple H tells The Miz that Miz is a classic example of what he was talking about, saying that Miz “failed” two weeks ago when he was given the opportunity to compete against Randy Orton, a match that ended inconclusively before The Miz was dismantled by “The Viper” in front of The Miz’s parents. Triple H says that he fails to see how The Miz’s failure has anything to do with him and that he gave him another “opportunity” on RAW when he let The Miz host Miz TV and have Big Show as his guest with the guest ultimately knocking the host out. The Miz argues that all Miz TV was on RAW was a “setup”, but Triple H says that he felt that Stephanie had every right to come to the ring after Miz called Stephanie a “castrating witch”. Triple H continues, saying that he could understand why The Miz was upset, claiming that Stephanie “regrets” what happened on RAW. The COO then says that he is going to give The Miz another “opportunity”, offering The Miz a match with Randy Orton. The Miz gladly accepts the rematch and Triple H asks if he should fly The Miz’s parents in for the rematch. Triple H then tells The Miz that “opportunity is knocking”, telling Miz to “go get ‘em, tiger”.

In tag team action, The Prime Time Players would face The Real Americans, with Zeb Colter in their corner. In the end, it was Jack Swagger locking in the Patriot Lock on Darren Young, forcing Young to tap out to pick up the win for The Real Americans.

Then it was time for the United States Championship to be defended as The Shield’s Dean Ambrose, with Seth Rollins & Roman Reigns in his corner, would defend the United States Title against “The Show-Off” Dolph Ziggler. However, Dolph would not come to the ring alone, bringing Rob Van Dam and Kofi Kingston with him to be in his corner for the match. During the match, a brawl between all six men would bring an abrupt end to the match and it would lead to Triple H coming out and ordering the match to be restarted as a 6-Man Tag Match!

Per the orders of Triple H, Dolph Ziggler would team with Kofi Kingston and Rob Van Dam to face The Shield in a 6-Man Tag Match on SmackDown. At the end of a chaotic match, it was a distraction from Roman Reigns that would allow Seth Rollins to come in with a knee to the face to Kofi Kingston, allowing Dean Ambrose to pin Kofi to pick up the win for The Shield.

Backstage, Triple H breaks up a backstage interview with Big Show, saying that there is no other job in the world that “The World’s Largest Athlete” can do, mocking Big Show’s crying, nearly driving Big Show to knock the COO out. However, Triple H reminds Big Show of what is on the line and the giant reluctantly backs off.

The Divas were in action on SmackDown as Divas Champion AJ Lee, with her new bodyguard, Tamina, in her corner, would go one-on-one with Cameron, with Naomi in her corner, in a non-title match. During the match, Tamina would pay dividends as the bodyguard quells Naomi’s attempt at interference with a vicious clothesline on the outside. Meanwhile, in the ring, AJ Lee hits the Shining Wizard on Cameron en route to the Divas Champion picking up the win.

Before his newest client, Ryback, goes one-on-one with CM Punk at Battleground, Paul Heyman appears on SmackDown, asking if the fans are surprised that he pinned CM Punk at Night of Champions. Heyman says that, every time that Punk tries to rise up against him, Punk is going to “lose”, saying that the fans motivate Punk to try and attack him and that is what led to Punk falling for his trap on RAW, when Heyman lured Punk into a two-on-one assault from Ryback & Curtis Axel that ended with Ryback military pressing Punk through a table to the concrete underneath. Heyman continues, saying that he would like to thank Curtis Axel for helping him put the plan together and he would like to thank Ryback for pulling off the attack, but he would like to thank the fans most of all because they are the ones who motivate Punk to keep fighting. Heyman says that history will repeat itself at Battleground because Punk will end up flat on his back courtesy of Ryback, looking up at Ryback and himself, the “best in the world”.

With Jinder Mahal & Drew McIntyre in his corner, 3MB’s Heath Slater would go one-on-one with Santino Marella. With a ridiculous assist from The Great Khali, Santino would hit the Cobra Strike on Slater en route to picking up the win.

After being assaulted by Randy Orton in front of his parents two weeks ago on RAW, The Miz would get his shot at revenge as The Miz would go one-on-one with Randy Orton in the main event. During the match, The Miz would take it to Randy Orton, but when The Miz goes for a clothesline in the corner, Orton gets out of the way and The Miz collides with the top turnbuckle, appearing to re-injure his neck/collarbone area. The Miz would immediately grab his neck and roll to the outside where the ringside physician tries to check on The Miz, but Randy Orton pulls the injured Miz back into the ring. Orton drops The Miz with a suspended DDT before pummeling The Miz with right hands, shoving the referee whenever the referee tries to restrain Orton with Orton’s actions resulting in a disqualification. However, Triple H comes out, claiming that Orton is trying to get himself disqualified to get out of the match before the COO orders the match to be restarted with no disqualifications and no count-outs! With the blessing of the COO, Orton continues the attack, tossing Miz over the announce table, but The Miz is briefly able to fight back with a steel chair shot to the mid-section and a second shot to the back. However, Orton would put The Miz back down with a boot to the face before dragging Miz to the ringside barricade and planting The Miz with a suspended DDT on the arena floor! Orton was not through, however, as Orton continues to hammer The Miz with right hands before rolling the lifeless Miz into the ring. Orton then pulls The Miz to his feet, putting The Miz back down with an unnecessary RKO, pinning The Miz for the win. As Orton smiles, pleased with his actions, the medical staff slides back into the ring to tend to The Miz.