Why Mark Henry deserves your respect

Mark Henry, then 24yrs old, made his first appearance on WWE TV in March of 1996. He  made his official roster debut at SummerSlam that same year when he came to help Jake Roberts who was being humiliated by Jerry Lawler.

Since that appearance in August 1996 and now, Mark Henry has been pretty much a constant on the WWE roster, but he is still seen as a joke, seen as the fat man who can’t wrestle. 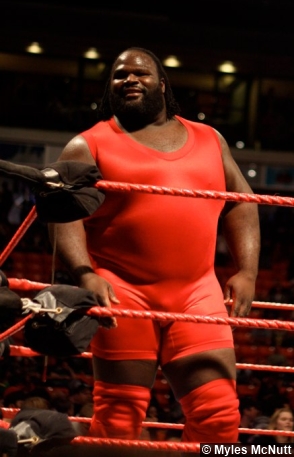 With a career spanning close to seventeen years, Mark Henry has had a longer career than most. In WWE alone, he was there before Edge, Kurt Angle, The Rock, Batista, Lita, Trish Stratus, John Morrison, The Dudleys and Rob Van Dam and he’s still there long after every single one of them have either retired or gone elsewhere to wrestle.

Henry has had a longer in-ring wrestling career than Steve Austin and The Rock, while it’s also a fact that his WWE tenure is longer than that of Hulk Hogan, The Ultimate Warrior and Randy Savage to name but three bona-fide WWE Legends.

Considering he was signed to a then-unheard of 10 year contract initially, the general consensus at the time was that Vince McMahon was counting the days until that term expired and he could fire the man Powerslam magazine seems to feel can do no right. Seven years after that moment in time and Mark Henry is still employed.

Of course, the length of his WWE career is not the only reason that Mark Henry deserves your respect.

Originally coming in on a wave of nationalistic pride due to being part of the 1996 US Olympic Team, Mark Henry was pushed on one thing and one thing only; his undeniable strength. Now, even today, he’s pushed on the basis of his undeniable strength, but to go along with that he now also has a character to go with it… but I’m getting ahead of myself.

After debuting as the bland babyface American hero, Mark Henry defeated Jerry Lawler at In Your House: Mind Games in September 1996 via submission when he placed “The King” in an over-the-shoulder back-breaker. From there he did nothing of note and missed time through injury until January of 1998 when he joined The Nation of Domination (a quasi-Nation of Islam-style group) led by Faarooq and featuring a young Rock amongst the ranks. It was at this point some character was added to the mix.

First, this came in the form of Henry simply being a heel version of his earlier power-persona, but the tag-team with D-Lo Brown led to the introduction of his first real wrestling gimmick; the one and only “Sexual Chocolate”.

No longer was he simply a strongman, he was a sexual powerhouse with insatiable desires and he turned on the charms with possibly the strongest woman in WWE history, Chyna. Some segments of Mark wooing “The Ninth Wonder of the World” were actually entertaining and Henry actually began to get through to future WWE Women’s Champion.

It wouldn’t last of course and in one of the more disturbing angles to come from the mind of Vince McMahon, he began lusting after Mae Young and many a young fan was traumatised by the sight of this gargantuan behemoth in bed with the 76yr-old veteran (who, earlier in the year, had won the Miss Royal Rumble 2000 swimsuit issue and then exposed her boobs – which were actually a prosthetic appliance – to the crowd). To make matters worse, Mark Henry impregnated Mae Young and the oldest Diva in town eventually gave birth, live on RAW…. to a HAND!

To say this period in his career was an embarrassment is an understatement of the grandest order, but the reason I mention this is because Mark Henry came through it all with a smile on his face even though the next few years after the character was quietly canned were relatively uneventful.