Michael Cole has become the voice of WWE; he started off his career with the company as a backstage interviewer before moving to the SmackDown commentary table in 1999.

The 44-year-old from Syracuse, New York, then made it to WWE’s flagship program Raw in 2008 where he has been ever since.

Cole has been involved in some storylines, most notably as the voice of the anonymous Raw general manager with the phrase ‘Can I have your attention, please. And I quote…” He has also wrestled at WrestleMania and been involved in the Royal Rumble match.

We caught up with Cole to talk about if he ever wanted to be a wrestler himself, his reaction to the night Jerry Lawler had a heart attack live on Raw, his most memorable matches to commentate on, receiving an ear-bashing from Vince McMahon and much more. 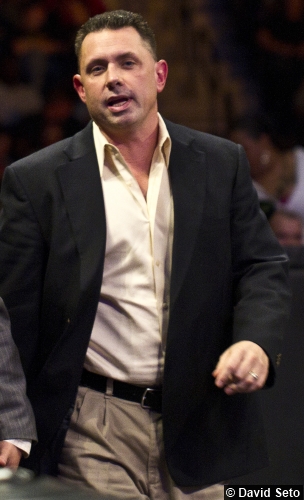 I worked at CBS News for eight years in radio and I covered a lot of stories from around the world and I was on the road for about 300 days a year, and I wanted to spend a little bit more time at home with my wife and family, WWE had an opening I applied and got the job.

Were you a wrestling fan growing up and who were the wrestlers you enjoyed watching?

Oh yeah, I grew up in Amenta, New York, which was a WWE (at the time WWWF) hotbed. I grew up a big Bob Backlund fan, a big Bruno Sammartino fan, ‘Superstar’ Billy Graham and Pedro Morales, all the all-time greats.

Throughout college I watched WrestleMania and the first WrestleMania I watched was at the Landmark Theatre when I went to university in Syracuse, New York.

When growing up as a fan did you ever have aspirations of becoming a wrestler yourself?

No, never in a million years did I ever want to get in the ring. I thought maybe one day I would work for WWE but I never thought I would actually compete in a match let alone a match at WrestleMania, but I never ever thought I would do that. I always wanted to be involved in the product somehow, but not knowing how I would get there.

What was it like when you made your debut on WWE television?

It was odd because I had gone from real news, covering real serious stories to all of a sudden being involved in storylines and being backstage doing interviews. It was a little odd, it was weird to get used to because I actually became a character now instead of a real person but it was so much fun, I’d got to do so much with my character and have had so much fun during my entire career.

What have been some of your highlights during your time with WWE?

My career was made at the beginning thanks to Shawn Michaels, Triple H, Chyna and Rick Rude, if it wasn’t for D-Generation X who knows if I would’ve ever been discovered to become the personality that I am today, with those guys we had so much fun together and I become their foil.

From there I went onto SmackDown and I was there for ten years straight before I moved to Raw and that was obviously a huge experience for me. Then moving to Monday Night Raw was probably the biggest moment of my career. Finally being asked to get in the ring and have Jerry ‘The King’ Lawler’s only WrestleMania match was a complete honour, I was completely humbled by that and I had a lot of fun doing it.

I like being a bad guy but now I’m a good guy again and it’s all just so much fun, you’re able to reinvent your character so much in this business and that’s why I enjoy it so much.

What have been some of your most memorable matches to commentate on down the years?

I commentated on Mick Foley’s first WWE Championship that was such a huge moment for me. I was still green at the time, I was very young, Jim Ross had become sick and I actually ended up taking over at Raw for a few months and I got to call Mick winning his first championship in WWE, which was huge.

Following that probably the Eddie Guerrero v Brock Lesnar match when Eddie won his first WWE Championship. That was just phenomenal, I was really close to Eddie and that was really huge for me.

Over the years that have been so many great matches, being able to call The Undertaker v Shawn Michaels and The Undertaker v Triple H matches at WrestleMania. This past year calling The Undertaker v CM Punk and of course the two Rock v Cena matches, I’ve just had the honour and privilege to be at ringside to see the greatest matches in the history of our sport and it’s been tremendous. 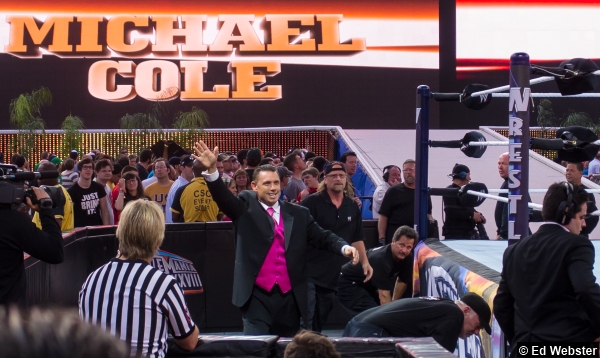 You were doing commentary on Raw when Jerry Lawler had a heart attack, what instincts kicked in when that incident happened?

Jerry had a match that night but it was business as usual, he came back and went to work nothing changed. Whatever match it was we were calling, I thought he was snoring and I turned around to look at him and he was passed out on the table and we went from there. It was a surreal thing and I’ve never watched that moment back, I don’t want to but I’ll never forget it for the rest of my life. He was passed out under the table and luckily doc Sampson was three feet away and they got to him quickly and got his heart going again but it was a bizarre time, I didn’t know for the last hour of the show if I was going to have to report that Jerry had passed away or if he was surviving and luckily we got the news right as we were going off the air that he was surviving, it was a really tough time.

Obviously, it all came out the way we wanted it to, and it is great having Jerry back on the commentary table. It changed me personally but it also changed me professionally because at that point I became a babyface again and I think for the best, I was a bad guy for a while but it was time to change. Obviously, Jerry’s heart attack changed history as we look at it.

What have been some of your favourite road stories whilst with WWE?

The whole thing about being on the road is camaraderie, it’s like a big family, and we all go through the same things, being away from home, being away from our families. It sucks having to leave your wife, I have a beautiful place in Texas that I never want to leave but you have to leave, you have to go to work. That’s the worst part about it, getting on that plane on Saturday or Sunday having to go on the road for a few days and laving everybody at home but once you’re out here your with your second family and you have the opportunity to spend time with your friends.

John and I are so blessed because we have the ability not only to work together on Raw and SmackDown but also to be able to do stuff like we’re doing for Layfield Report and our YouTube show The World Tour and radio show, The JBL and Cole Show. We can actually have fun and work at the same time, which makes our job the greatest job in the world. 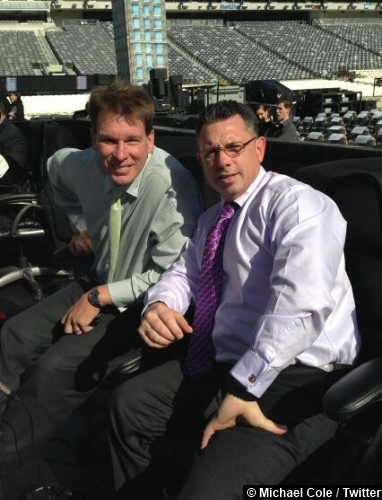 What has it been like working with JBL on the commentary table?

First off we are friends and we do a lot of stuff together, but secondly, that friendship translates on the air. We know we can take shots at each other and there’s no ego involved, you’re not being offensive to one another that’s what makes our team so good. I realise John’s the star and I’m the straight guy and that dichotomy works, it’s like the old Gorilla and Bobby team, I would never compare ourselves to them because they were the greatest ever but we are trying to reach that level and we are trying to do what Gorilla and Bobby used to do and hopefully someday we can take it to the next level.

Who were some of the commentators you have taken inspiration from?

From a wrestling standpoint Jim Ross and Gordon Solie, they are the two guys that I’ve really tried to follow in the footsteps of. Probably the number one guy honestly that I looked up to whilst growing up because I watched him for so many years was Vince McMahon. When I grew up as a kid and into high school and then into college he was calling all of the action in the WWF, I loved Vince’s relationship with Jessie Ventura, that’s what I try to recreate with John.

Gorilla and Bobby and Vince and Jessie are the two teams that I at least try to emulate, those two teams were the trailblazers in this business as far as the commentary is concerned.

He is wonderful, he’s hard but he is a genius with what we do as a company. If you can understand how to learn from him, here is a guy that is a billionaire and he’s built the wrestling business to where it is today but he still goes out and puts himself in situations, embarrassing situations for the good of the company.

That’s why when I did my role as a heel for a few years and all the things I did to Jim Ross and Jerry Lawler, I did that with Vince in mind. Vince is the owner of the company but he has had his head shoved up Big Shows rear-end, had his head shaved bald at WrestleMania, all the stuff he did over the years I thought if my boss could do that, I could do that.

He is one of my heroes in this business and even in life, I’ve grown up in this business, I’ve spent 16-years here, I started as a fairly young kid, I’ve raised my family being a part of WWE. Vince is like a second father to me and he has helped me throughout my career and I hope to spend the rest of my career with the guy, he’s just been an unbelievable mentor.

Have you ever had an ear-bashing from Vince?

(Laughs) Yeah, it happens every week, the thing is you can’t take it personally. Vince is very obsessive about his product because he should be, he has built WWE into a global phenomenon, this is his baby and he acts that way because he wants his product to be the best.