Should The Rock End His WWE Career?

Last week in an interview with New York City radio host Pete Rosenborg, The Rock admitted that it’s possible that his match with John Cena at Wrestlemania 29 would turn out to be his last one. He then reiterated this possibility on Twitter earlier this week. Now, nearly a month removed from Wrestlemania 29, seems as good a time as any to discuss whether such a decision would be the right thing for him to do personally and the best thing for the WWE. Just under a month ago, The Rock was WWE champion and preparing to defend his title against John Cena in front of a crowd of over 80,000 at the Met Life stadium. Now, fast forward to the present and Cena stands as champion having defeated The Brahma Bull in their clash at the big one. The Rock meanwhile has gone back to his movie career and disappeared once again from WWE television, not even making the appearance that he was scheduled for the night after ‘Mania due to injury. Given The Rock’s movie career, the amount of money he has helped the WWE make over the past 2 years and the physical demands of working a wrestling match at his age, having just turned 40, is this the perfect time for The Rock to call time on his career permanently? 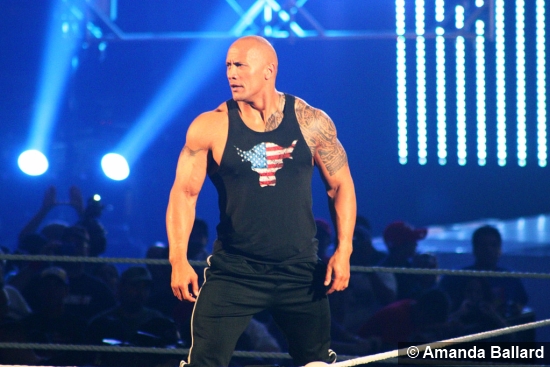 Dwayne Johnson was always a special talent, something the WWE recognised all the way back in 1996 when he made his debut for the company at the Survivor Series under the ring name Rocky Maivia. Johnson only made his professional wrestling debut earlier in the year, but WWE management, seeing that Johnson was a good looking guy, with bags of confidence, a good physique and the kind of presence that set him apart, the WWE proceeded to push him as hard as they could, pretty much right off the bat. Taking advantage of Johnson’s heritage, being a 3rd generation wrestler, Rocky was quickly booked to win the Intercontinental Title, which at the time a much more prestigious title than it is these days. Had the Maivia character appeared on the scene just a few years earlier, his push, coupled with all that star potential would have seen him residing at the high end of the card in no time at all, but in early 1997 the business, and more importantly, what the fans wanted from it, was changing and the mega push for such a clean cut babyface quickly bred resentment from the WWE audience of the time.

Indeed, just 3 months after Rocky’s debut in the WWE, he was hearing chants of ‘Die Rocky Die’ and ‘Rocky Sucks!’ which obviously did not match with the WWE’s push for him. The WWE fans saw through the big push and the clean cut features and rejected the character if not the man himself outright. Lesser talents may never have recovered from such an inauspicious start with the company but Dwayne Johnson was, as already mentioned, something exceptional. Aided by the creative team (such as it was at the time) prudently turning him heel, the Rocky Maivia character began making use of those boos as delicious heel-heat as he transitioned into the cocky, smooth talking phenomenon known as The Rock. His run as a member of the Nation of Domination got ‘the people’s champion’ over big time and a star had been born. Over the next year, The Rock played a huge part in the revival of WWE’s fortunes in the midst of the Monday Night War with WCW, and slowly more WWE fans started to smell what The Rock was cooking. 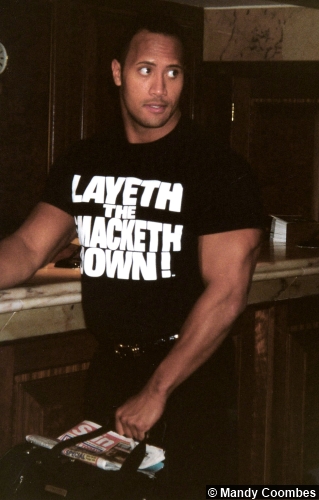 Memorably, at the Breakdown pay-per-view in 1998 he faced Ken Shamrock and Mankind in a fine triple threat cage match which would seemingly usher in a new era in The Rock’s career. Still largely booked as a heel against two other faces in this match, when The Rock emerged from the curtain a massive roar went up across the crowd and all of a sudden, through nothing but sheer force of personality, The Rock had become the most popular wrestler in the company with the exception of ‘Stone Cold’ Steve Austin. Having never officially turned him face, the WWE capitalised on The Rock’s new found popularity and positioned him as though he was ready to join Austin in his crusade against the maniacal Mr McMahon character. In the build up to the Survivor Series that year it seemed as though The Rock was starting to almost rival the popularity of the ‘Texas Rattlesnake’ as well, so it was to some affect that at the pay-per-view, The Rock won his first world title, by turning on the fans and joining forces with Austin’s biggest enemy becoming ‘The Corporate Champion’ in a piece of masterful storytelling that WWE has, in my opinion, not come close to since. It also had the duel role of setting up the following year’s Wrestlemania main event where The Rock and Austin would face off in the first of their 3 big matches.

Unsurprisingly at the 15th instalment of the ‘showcase of the immortals’ Austin got the popular face victory and gained a measure of revenge against both McMahon and The Rock. Afterwards, once they had had a rematch at Backlash in April of 1999, the WWE quickly turned The Rock back to a face. Even at the peak of his heeldom, the fans had been itching to chant for The Rock and they were now, finally able to do that. During the rest of the year, Dwayne Johnson refined The Rock character, adding more and more catchphrases to his already ample selection and inventing the universally appealing pastime of ‘sing along with The Rock’. Whilst he wasn’t booked in the headline programmes (as that spot was reserved for Austin) The Rock took part in some of the most enduring moments of his career, in particular his welcome of Chris Jericho who debuted during a Rock promo, and the many segments offered up as one half of the super-over ‘Rock N Sock Connection’ with Mick Foley. It was clear that despite his relative inexperience, and being booked very obviously as the ‘number 2’ guy in the promotion, The Rock was a massive draw all of himself.

During this period, The Rock had deliberately been kept away from Steve Austin as the WWE had planned for the two to have their rematch at Wrestlemania 16, at which event it would be Austin’s time to turn heel and The Rock to take up his place as the lead babyface in the company. These plans were scrapped when Austin had a recurrence of the neck injury which had threatened to end his career a few years previous, which required surgery and put him out for nearly a year. Because of this (or maybe in spite of this), the result from The Rock’s point of view was the same- he came out of Wrestlemania 16 as the biggest star in the business, despite his loss to Triple H in the main event of the show. Their subsequent feud, that took in an enjoyable scrap at Backlash and then a jam packed Judgement Day Iron Man Match, was a critical and commercial success and The Rock was at the heart of it all. Whilst wrestling experts and its hardcore fan base bestowed much of the credit for these strong showings on the shoulders of the vastly improving Triple H, it was The Rock whose star shone brightest.

With Austin’s return came the inevitable showdown between the two biggest stars in the industry since Hulk Hogan, at Wrestlemania 17. In the build up to the event, The Rock had become the first 6-time WWE Champion in history, having beaten Kurt Angle at February’s No Way Out pay-per-view. Coming on the back of WWE’s purchase of WCW, the end of the Monday night war and the realisation of Vince McMahon’s dream to monopolise the business of professional wrestling in the US, this was the party of all party’s. It didn’t hurt that it was host to a great card of action from a promotion in the most confident and commercially successful period in its history. At the end of the show, Austin joined forces with his former nemesis Vince McMahon (just as The Rock had done back at Survivor Series 1998) to turn heel and win the WWE Title. The Rock’s loss was necessitated by the fact that Dwayne Johnson had been cast in his first movie role, The Mummy Returns which would result in him being away from wrestling over the next few months.