WWE: Vince DID Challenge Dana…and now Chael wants in too

Any wrestling fans paying attention to the UFC 158 promotional juggernaut heading into last weekend’s match between Nick Diaz & GSP found themselves in for a somewhat unexpected surprise, when Dana White revealed during an interview with sportscaster Denis Gauthier Jr. that he had been approached by Vince McMahon back in 2010 as Vince was trying to come up with his WrestleMania 27 Main Event. 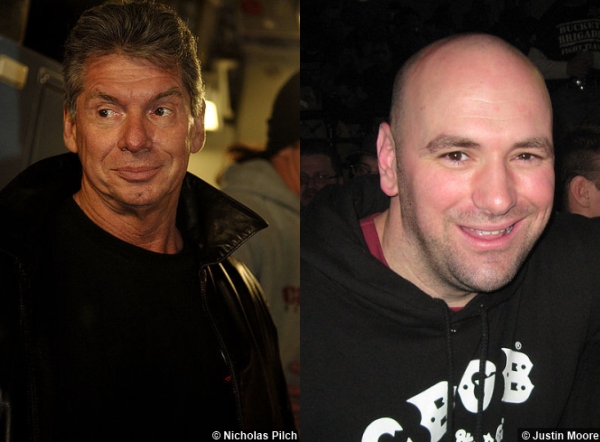 “Vince is too old, which he won’t think he is and he’ll go crazy (when he hears about this). He wanted to do that one time. Vince wanted to fight me. Swear to God, he called me up and said, `Let’s do it. We can either do it in the UFC or let’s do it at WrestleMania.’ And I said, `You are crazy’. I always said I respect Vince and I’ll say it again. I respect Vince very much, but Vince is too old to be fighting.”

White validated his point in an interview the next night by admitting that he himself was also too old to be stepping into a ring or octagon:

For years fans have speculated about the possibility of WWE and UFC doing some kind of business together, helped along in no small part by teases such as the Undertaker’s presence at a Brock Lesnar fight, and the rumoured (but sadly vetoed) appearance of CM Punk in Chael Sonnen’s corner way back on UFC on Fox 2.

Speaking of Sonnen, guess who waded into this full tilt on his twitter account last night? That’s right, none other than the illustrious Chael P. Sonnen. Here’s a selection of what Sonnen had to say about the situation: 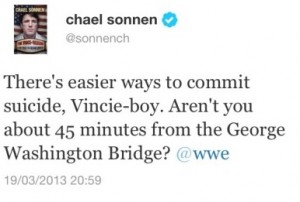 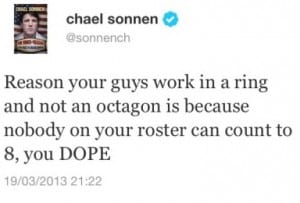 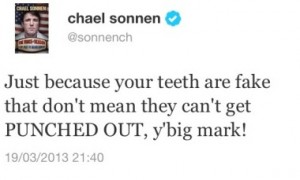 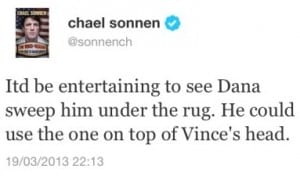 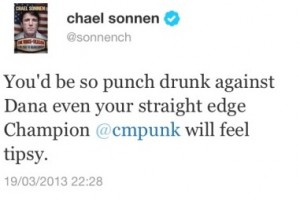 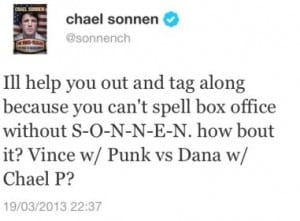 Whether you love him or hate him, you have to admit that Sonnen is exceptional when it comes to verbal hype. You only have to watch a few of the multitude of epic Chael Sonnen promos doing the rounds on the web to realise that Sonnen understands precisely how to hype a fight, whether that is because you want to see him win, or just because you want to see someone shut his mouth.

We know that Sonnen is a wrestling fan (although he’d probably never admit that), and we know that he’s friendly with a certain CM Punk. With this in mind, is it outside the realms of possibility that we could potentially see Sonnen appear in the WWE in the future?

We now know that Lesnar has signed a contract extension, and if recent rumblings are to be believed that could well mean that we will see CM Punk and Brock Lesnar tangling in the near future. If that were the case then you have to believe Paul Heyman would be siding with Brock, so that could potentially leave the door open for Sonnen to appear in Punk’s corner as some kind of tactical advisor, helping him plan exactly how he’s going to take on the beast that is Brock Lesnar.

The chances of this ever happening are unfortunately slim to none, but we can dream can’t we?

What do you think? Was Vince crazy to think he could talk Dana into doing business? Could Sonnen (or anyone else from the UFC for that matter) be a good addition to the WWE? Leave us a comment below, or on the TalkWrestlingOnline Forums and let us know your opinion.