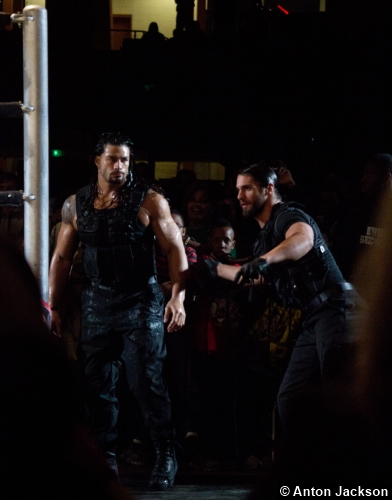 The 706th edition of WWE Friday Night SmackDown was a revolutionary social media-controlled edition dubbed Social Media SmackDown, which came to you from the Chesapeake Energy Arena in Oklahoma City, OK. On a show dominated by social media interaction, Randy Orton would face a daunting challenge as “The Viper” would go one-on-one with “The World’s Largest Athlete” Big Show in a clash of former World Champions. After weeks of vignettes, the unique, dancing sensation known as Fandango would strut his way onto Friday Nights as Fandango finally makes his debut on SmackDown.

Backstage, Daniel Bryan confronts his tag team partner, Kane, claiming that he was the reason that they won on RAW before informing Kane that they will be in a rematch against The Prime Time Players, but, this time, Kane will be the one who will be blindfolded while Bryan will have one arm tied behind his back!

The United States Championship was on the line on Social Media SmackDown as Antonio Cesaro defends the gold against “The Awesome One” The Miz in a 2-out-of-3 Falls Match. The first fall would go to Antonio Cesaro after Cesaro plants The Miz with the Neutralizer, giving Cesaro the advantage with a score of 1-0 over Miz. Shortly after this, The Miz was able to catch Antonio Cesaro and lock him in the Figure-Four Leg Lock, forcing Cesaro to tap out to bring the match to a tie at one fall a piece. Later on in the match, Antonio Cesaro would manage to survive the Figure-Four Leg Lock by The Miz and, in an act of desperation, Cesaro tries to shove Miz into the referee, but Miz prevents himself from crashing into the official. This brief distraction allows Cesaro to roll up Miz, but Miz counters the roll-up. However, Cesaro would hook the tights of The Miz, using the illegal leverage to counter the roll-up, continuing to hold onto the tights en route to stealing a victory and successfully retaining the United States Title!

In his home state of Oklahoma, WWE Hall of Famer and legendary commentator Jim Ross would make a rare and special appearance on SmackDown as J.R. would interview a fellow Oklahoma native and the #1 Contender for the World Heavyweight Title at WrestleMania 29, “A Real American” Jack Swagger, along with his confidante and representative, Zeb Colter. The Hall of Famer first introduces his guests, Jack Swagger and Zeb Colter, who make their way to the ring. Ross says that that he has always respected Swagger’s ability and that he actually recruited Swagger to play for the Oklahoma Sooners, but Swagger argues that the Sooners have no “heart”. However, Swagger says that he and Colter believe that J.R. is a “real American” and that is why they allowed J.R. to do the interview. The Hall of Famer says that he has some tough questions for the two of them, but J.R. explains that, back on the September 3 edition of RAW, Swagger took a leave of absence that lasted five months and, upon his return, Swagger had a new attitude and a new outlook. Ross then asks Swagger what changed Swagger’s attitude during his sabbatical, but Zeb Colter answers the question for Swagger as Colter says that he provided Swagger with the “truth” of what is happening in America every day. J.R. admits that he does not understand where Zeb is coming from and Colter explains that, every day, things are happening in America that he does not like, saying that Alberto Del Rio snuck into the country and took a position that “rightfully belongs” to an American. Colter continues, saying that foreigners are taking jobs from “real Americans” and neither he nor Swagger will sit idly by while illegal immigrants take over the country.

Jim Ross then tries to ask his next question, saying that, on April 7 at WrestleMania 29, Swagger has the opportunity to try and defeat Alberto Del Rio for the World Heavyweight Title, but before the Hall of Famer can even get to his question, Zeb Colter interrupts. Colter says that, after WrestleMania, the World Heavyweight Title will belong to a real American, saying that Del Rio is “not one of us” and he needs to leave the country. Zeb then says that, when something in a person’s home smells, they throw it out and Del Rio is the stink that they must “throw out”. Colter continues, saying that, at WrestleMania, Swagger will be fighting for his home and country. Having heard enough, J.R. gets in Swagger’s face, asking what has happened to Swagger, saying that Zeb has “brainwashed” Swagger! However, Colter accuses J.R. of brainwashing Swagger early in the career of Swagger, but the Hall of Famer doesn’t back down, advising Colter to exercise his right to “remain silent”. Colter then suggests that J.R. keep a “civil tone”, lest something happen to the Hall of Famer that he will “regret” later on. Things then get uncomfortable as Swagger knocks the hat off of Ross’ head and, as Swagger pokes the Hall of Famer in the chest, Swagger tells J.R. that Colter is a “real American”. Swagger then says that he was “wrong” about Ross, saying that he and Zeb are going to fix America. Swagger then says that Ross is nothing more than a “sympathizer” as Ross finds himself trapped in the corner of the ring. Thankfully for Jim Ross, World Heavyweight Champion Alberto Del Rio comes out, handing J.R. his hat before addressing his WrestleMania opponent. Del Rio tells Swagger that he is not a “real American”, he is a “real jackass”! With the champion in his face ready to fight, Swagger opts to exit the ring and save the fight for WrestleMania.

In a unique rematch from their unique match on RAW, WWE Tag Team Champions Kane & Daniel Bryan would face The Prime Time Players in a non-title match. However, Kane would be wearing a blindfold for the entirety of the match while Daniel Bryan would have one hand tied behind his back. As if that wasn’t enough, the hood that Daniel Bryan puts over Kane’s head has a picture of a goat on it! During the match, the blindfolded Kane would grab hold of the referee and his own partner, Daniel Bryan, but would realize his mistake and avoid doing harm to either man. However, the distraction would allow Titus O’Neil to surprise Daniel Bryan with a roll-up, pinning Bryan to pick up the win. After the match, Kane discovers that Bryan put a ‘goat hood’ on him and, when Bryan tries to ‘hug it out’ with Kane, Kane puts the hood on Bryan before dropping him with an uppercut!

In a special message delivered via Skype from Adelaide, Australia, “Y2J” Chris Jericho says that his band Fozzy is a big hit in Australia and the WWE is big in Australia, as well. Jericho also plugs the encore showing of the new show that he hosts on Syfy, Robot Combat League, before saying that he will be back in the WWE very soon.

Backstage, Matt Striker conducts an interview with SmackDown’s newest Superstar, the dancer known as Fandango. Fandango dances his way into the interview area and tries his best to coach Matt Striker in saying his name correctly just as he does. Fandango then explains that he has “mastered” the art of ballroom dancing and now he is there to master the WWE. Striker then begins to ask Fandango about his opponent in his debut match, but Fandango interrupts, saying that he will not be making his in-ring debut tonight and he will not be competing until Striker can say his name correctly!

The main event of next week’s SmackDown was revealed during Social Media SmackDown as, next week, World Heavyweight Champion Alberto Del Rio will go one-on-one with “Mr. Money-in-the-Bank” Dolph Ziggler as the fans voted Dolph into the match over the other two candidates, Wade Barrett and Antonio Cesaro!

Then it was time for the main event as, amidst his war with The Shield, “The Viper” Randy Orton would go one-on-one with “The World’s Largest Athlete” Big Show. In the middle of the grueling match, the three men that comprise The Shield come to the ringside area as Dean Ambrose, Seth Rollins, & Roman Reigns arrive on the scene. The Shield surrounds the ring, ready to attack Randy Orton, but Sheamus rushes to the ring to stand at the side of Orton to battle The Shield! In classic Shield fashion, the trio uses their numbers to overcome Orton and Sheamus, but, amidst the fight, Sheamus inadvertently pushes Roman Reigns into Big Show, who was using the ropes to get back to his feet. The angry giant responds by blasting Reigns with the K.O. Punch, which stops the other two members of The Shield in their tracks for a few moments as they stare into the angry eye of Big Show! Faced with possibly having to fight the goliath, The Shield picks up Roman Reigns and makes a hasty retreat through the crowd. Meanwhile, in the ring, Big Show proves that he has no allies as he drops Randy Orton with the chokeslam, but is dropped with the Brogue Kick by Sheamus as a result!

What did you think of Social Media SmackDown? Post your comments in the box below.