Tito Santana was one of the most entertaining superstars to step foot inside the squared circle.

The 59-year-old grappler from Mission, Texas wrestled for the WWF for the best part of thirteen years from 1979 to 1993 and during that spell, he won the Tag Team Titles and the Intercontinental Championship on numerous occasions.

We caught up with Tito to talk about appearing in the first nine WrestleMania’s, getting inducted into the WWE Hall of Fame and the Professional Wrestling Hall of Fame, what Vince McMahon was like as a boss plus much more. 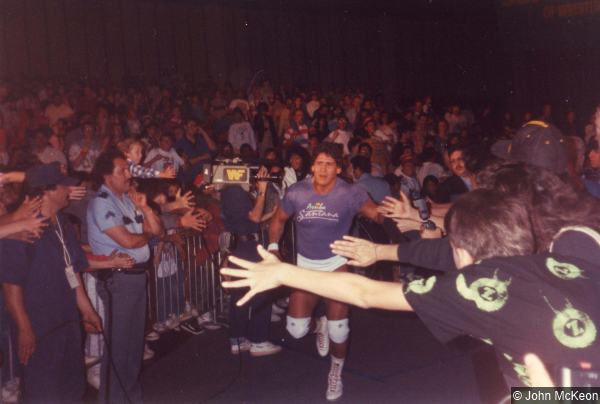 You were in the same American Football team as fellow wrestler Tully Blanchard at university, what was that like and how did you go from football to wrestling?

Whilst at West Texas A&M University I met a lot of professional wrestlers and our quarterback was a promoter, Tully Blanchard’s father, Joe Blanchard. He promoted in San Antonio in South Texas so they started getting me interested in wrestling. Once I gave up football and realised how tough it really was and how short a career it was, because back then the average career of a football player was about four years.

I decided to give wrestling a shot and my intentions were at the beginning to just do it during the offseason but once I got started I was enjoying it and I saw a wrestler’s career was a lot longer than a footballer’s career. So I made my decision and it turned out to be a much better decision for me than if I had stayed in football.

Were you a wrestling fan whilst growing up and if so who were some of the wrestlers you enjoyed watching?

I wasn’t a fan of wrestling, I came from Texas and wrestling didn’t come on television until about 11pm and I never stayed up that late so I didn’t know any of the wrestlers. As a matter of fact, I got into trouble, I was in the dressing room and Dusty Rhodes came in making a lot of noise when I was just breaking in and I asked Tully Blanchard, “who’s that?” and he told me. Tully couldn’t believe I didn’t know who Dusty Rhodes was but I wasn’t a wrestling fan so everybody was new to me. I think Dusty’s feelings were hurt because I didn’t know who he was.

You joined the WWF in 1979 and teamed up with Ivan Putski early on and went on to win the Tag Team Championships at Madison Square Garden, what was that like so early on in your career?

My wrestling career got moving very quickly, I never would have expected to have gotten to New York as quickly as I did especially when I didn’t have a wrestling family and I didn’t know anybody in wrestling when I got into the sport. My father wasn’t a wrestler I just came in, there were people that I knew like Terry Funk and Tully Blanchard but to get to New York and then to be teamed up with Ivan Putski that was a big shot in my arm, then we won the titles in Madison Square Garden, and whenever you do anything in Madison Square Garden it is an unbelievable feeling, and my career went from nothing to the top overnight.

You then moved onto a singles career and won the Intercontinental Title and had many great feuds with the likes of Don Muraco, Greg Valentine and Macho Man Randy Savage, what was that like?

In my opinion, the tag team wrestling allowed me to learn the business and it made me a better singles wrestler. Once I became a singles wrestler and won the Intercontinental Championship I always preferred singles matches, I felt very comfortable about my own ability. I had a good following, the fans always supported me wherever I wrestled, my popularity just kept growing and every time I stepped in the ring the reception I got was unbelievable.

With the opponents I had to wrestle it was pretty hard not to have a good match, the likes of Don Muraco, Mr. Perfect, and Greg ‘The Hammer’ Valentine, we ended up having the longest feud in the history of the WWF, and of course Macho Man Randy Savage, the list just goes on and on.

By winning the Intercontinental Championship you became the first Mexican American to win the title, what was that honour like?

I’ve always felt really proud to be a Mexican American and I represented all Hispanics from South America, Central America, and Spain. The thing I was proudest of was just being a good role model, I knew I was a person who wasn’t ever going to make the front page for getting busted for drugs or doing something illegal, I was so proud to be who I was and a role model for my heritage.

You then went back to tag team wrestling with Rick Martel, known as Strike Force, how was that experience?

At the time when Rick Martel and I became Strike Force tag team wrestling was really popular, it was as big as any of the single bouts. To team up with somebody as good as Rick Martel and the chemistry we had together, it was an enjoyable night every time we went out there. The fans got behind us right away, we had a great following and it’s always a good feeling when the fans are behind you, you never get tired of people screaming your name. 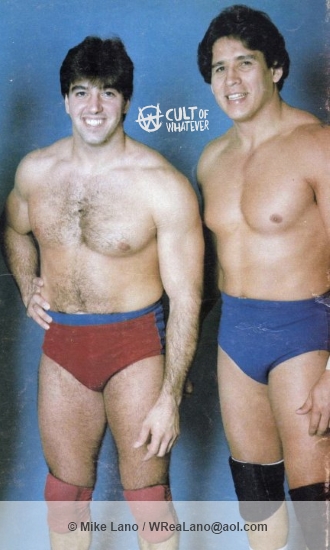 During the 1990 Survivor Series you teamed up with Hulk Hogan and Ultimate Warrior, what was that like?

For me that was the ultimate, Hulk Hogan was number one and Ultimate Warrior was pretty close to him, Warrior was selling more merchandise than Hogan at the time and his stock was quickly rising and for me to be part of a trio along with those two, I felt I was the number three guy in the company! It was a great honour for me and it was a great feeling to be in that spot.

You then moved on to the El Matador gimmick, how did that come about?

Vince (McMahon) told me he was going to give me a character and I thought he was going to do something with the character but I found out really early on that he didn’t have plans for El Matador. I was very surprised because I went through a lot, I went to Mexico, I learned how to bullfight and I thought he would have more plans to merchandise El Matador and to get me involved in some serious matches but that obviously was not the plan, and that is one of the reasons why I ended up retiring at such a young age. 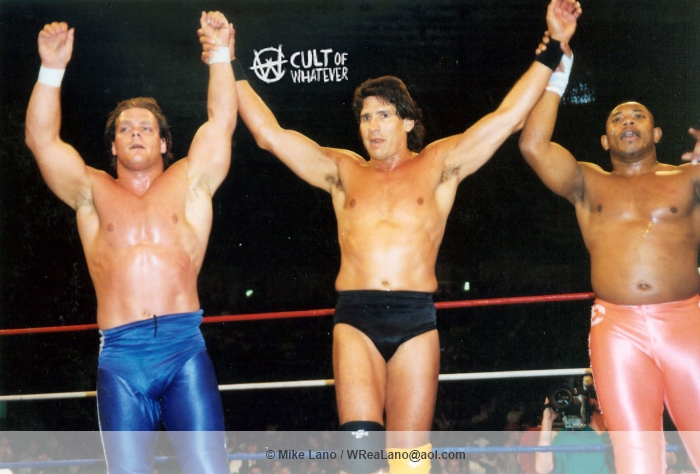 You came back to the WWF and worked as a commentator on the Spanish announce table, what was that experience like?

I really enjoyed it and I learned a lot about the business, I learned that stars have very little to do with their popularity, it’s the people in the front office who decide every move that is made and every match that is set up and every interview they tell you what to say, especially now.

I realised we had very little to do with our own success, I use to hear guys talk about how over they were and that they could do this and do that, and I just thought to myself none of us would be anywhere if Vince didn’t decide he wanted us over.

Having worked for Vince McMahon for many years, what was he like as a boss?

First of all, he is a businessman, he is a very hard worker, he deals with the stars and I believe he respects all wrestlers as long as you’re the one that is making him money. He makes you feel like you are the most important person in the world but the minute your run was over he just moves on, he will say hi to you but he really didn’t have the time and it’s not because he is ignoring you, it’s just because he has to take care of business.

I was really blessed that I was one of the guys that was making money for WWE and it was quite an honour, I have nothing bad to say about him. I did very well and I’m really grateful that he did what he did for me and my family.

It was such an honour to just be part of the beginning of something huge. I was a little disappointed because I was opening the card but before I went through the curtains Vince McMahon told me that the reason why I was there was because he needed someone to get the people off their butts, and I was going to set the tempo for the rest of the night, and that is when I realised how important the first match was.

When I retired I had been with the WWF the longest of anybody in the locker-room without being fired, some of the guys had come and gone but I had a long run with the WWF. Being part of the first nine WrestleMania’s was a huge honour, a lot of the wrestlers would have given their left arm to have been in my position, I just managed to hang on because of my hard work.

Being at the first WrestleMania did you ever think it would have become as big as it has today?

No not at all, I remember Vince coming to talk to us before the show and he said it was going to be a do or die, he had invested all of his money and we were either going to make it there or we were going to go under. Vince had gone bankrupt several times when he was younger, so he took a big chance but it turned out to be the best thing that will ever happen to professional wrestling.

In 2004 you were inducted by Shawn Michaels into the WWE Hall of Fame, what was that experience like?

It was a great experience that was the first year when they started having big inductions into the Hall of Fame and I was so honoured. I never realised it was going to be such a big event until I got to New York, WWE had sent a couple of limousine’s to pick my family up from Texas and when we arrived at the hotel I saw all the people that were there and I couldn’t believe it.

We went to the Hall of Fame induction and the crowd that was there was amazing and that is when it started to sink in what the event meant, it was such a big thing and it is such a big honour to be part of the WWE Hall of Fame.

You will also be inducted into the Professional Wrestling Hall of Fame on May 18th this year, are you looking forward to that?

Yes, I really am because that is a different animal; people that go into that Hall of Fame are voted on by other wrestlers. With WWE it is Vince McMahon who decides who goes into the Hall of Fame and with the Professional Wrestling Hall of Fame, it is your peers that think you are a Hall of Famer and that’s a different honour in itself.