Rick Steiner along with his brother Scott, known together as The Steiner Brothers are one of the most successful tag teams to ever step foot in the wrestling ring.

We caught up with the ‘Dog-Faced Gremlin’ to talk about appearing on the first-ever Monday Night Raw, if he ever considered fighting in the UFC, and the current state of tag team wrestling plus much more.

How did you and Scott first get into the sport of professional wrestling?

We both wrestled in high school and in college, I then dropped out for a while but wasn’t making a lot of money and ended up going back to school to do my master’s degree. I then ended up meeting George ‘The Animal’ Steele at a football banquet; he was a football coach at Michigan High School as well as teaching math’s in the summer.

I didn’t know George but I knew Steve Fraser, who was an Olympic champion and he was at the banquet with George and asked me if I would be interested in wrestling and I actually said no, I didn’t have an interest in it. He came to talk to me about it and said he would put a good word to Verne Gagne.

Verne then invited me up and I started training with Eddie Sharkey, a week later they sent me to Brad Rheingans camp and the rest is history. 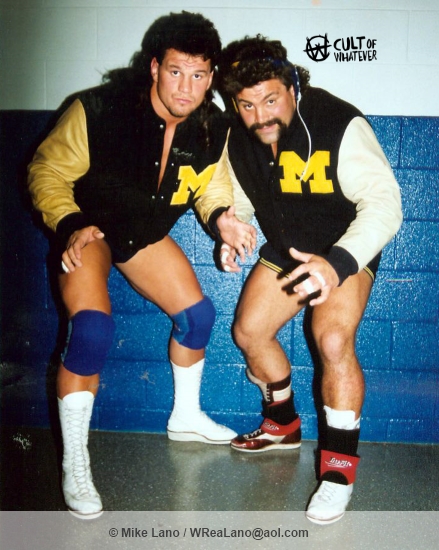 We didn’t get a chance to watch much, I always used to listen to Dick the Bruiser on the radio and I knew The Sheik was in Detroit, there was Haystacks Calhoun and guys like that but there was minimal exposure for my brother and I when growing up and we didn’t really get it until we were in college.

You started your professional career in NWA / WCW and went on to win the tag titles early on in your careers beating The Freebirds what was it like to be thrust into the main event so early on?

When Scott and I first went to the NWA and being around guys like, The Freebirds, Junkyard Dog, ‘Hacksaw’ Jim Duggan, Jake ‘The Snake’ Roberts, I was just a new guy breaking in and you never realised the company you’re keeping with being in the business. A couple of years later they all went up to New York and made it big with the WWF and then all of a sudden the wrestling business kind of took off there.

After a while, it all started to sink in going to WCW and the WWF at the time, looking back it was an honour to be in the ring with The Freebirds, The Road Warriors, Doom, The Skyscrapers. There were a lot of good tag teams back then, tag team wrestling was an exciting element of the show they put on and we were just fortunate to be around in an era when tag team wrestling was still considered a main part of the show.

The Steiner vs Doom (Check out Teddy Long!)

You also wrestled over in Japan with Scott, what was that experience like?

Japan was great; they treated us like kings over there. The wrestling was a lot harder because of the communication but with my brother and I having the amateur experience we didn’t need to speak, we didn’t need to learn the language we knew what had to be done and we went out there and did it.

The matches were more competitive out there and we treated it more like an amateur match, and that was something my brother and I really enjoyed and learned a lot from as well. 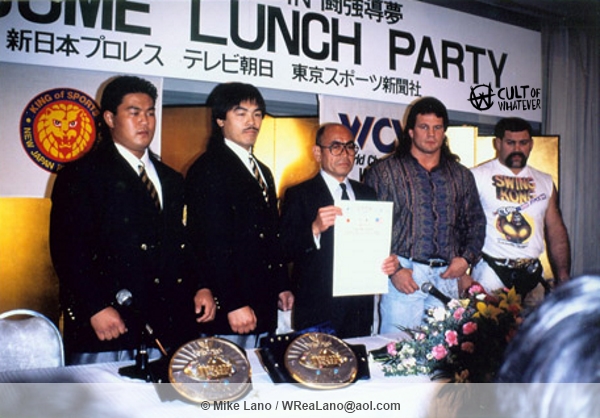 You and Scott then went to the WWF and won the tag titles on two occasions, what was your time like in the WWF?

It was a great opportunity working in the WWF and getting to wrestle Money Inc. The Million Dollar Man and Mike Rotunda, then we got to wrestle Bret Hart and Owen Hart, and The Headshrinkers. Getting the chance to just be apart of WrestleMania was a great experience all round, Scott and I enjoyed being up in the WWF and working for Vince (McMahon).

Recently it was the 20th anniversary of Monday Night Raw, you and Scott appeared on the first-ever episode, what was that experience like and did you think it would still be going strong 20 years on?

No, I didn’t have any idea it was going to last so many years, it was filmed at a music hall in downtown New York. For me, it was just another wrestling event and I didn’t really pay that much attention, I honestly had no idea that it was going be as big as it has become now. It was good to be on the first one and getting acknowledged for that.

After the WWF you and Scott then went to ECW, and during that time you worked with the likes of Mick Foley, Dean Malenko, Chris Benoit and Eddie Guerrero, what was your time like in ECW?

We had experience being on the road with Chris and Dean over in Japan. ECW was another company that was very interesting to work for, Paul Heyman had a different philosophy and it was very much balls to the wall. They use to do some crazy stuff and they said the crazier and the wilder you can make it, go for it.

It was another opportunity for Scott and me to explore our wrestling abilities and see what we could do in the ring. There was just some crazy stuff in ECW that I had never seen before, Vince would see all those guys ten to twelve years later and have a friendship with them.

You returned to WCW in a great era of tag team wrestling with Harlem Heat, The Outsiders, Road Warriors, what was it like being involved with all those great tag teams?

Scott and I went back to WCW in 1996 and that is when Eric Bischoff had come up with the NWO and that just took the business to the next level, lots of the American Footballers and Basketball players were wearing the NWO t-shirts.

The NWO was like a household name and it was just a great time to be in the business with the likes of Scott Hall, Kevin Nash, Bret Hart, Hulk Hogan and Goldberg. 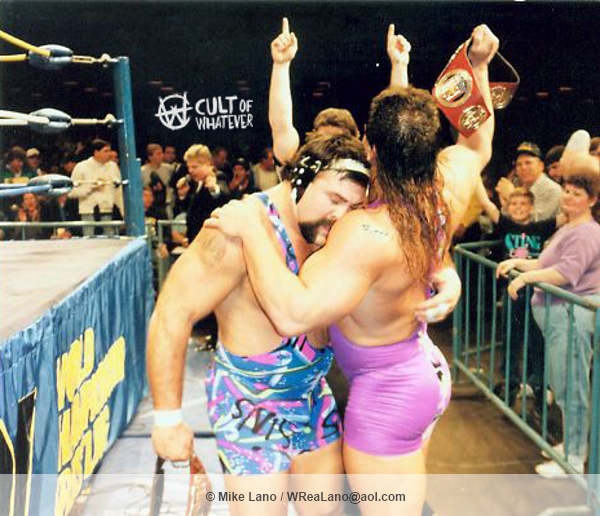 You then enjoyed a singles career in winning both the Television title and the United States Championship; did you enjoy the singles wrestling?

My whole career was singles then tag, singles then tag, I was fortunate enough to work with the likes of Kevin Sullivan, Jake ‘The Snake’ Roberts, Lex Luger, Sting and The Road Warriors, I learned a lot by the time they put my brother and I together which helped.

What were your thoughts when Vince McMahon bought WCW?

It was all anticipation, we thought that Mandalay Bay was going to buy the company and everything was going to be okay, then that week everything just kind of fell apart and in the last day or two they told us that Vince had bought it.

Some of us that had already worked for Vince before, we had a lot of curiosity about what was going to happen. There were a lot of uneasy guys in the locker-room, with people not knowing their futures. For me personally, I didn’t want to move back up to New York again, so there was a lot of uncertainty for me but I ended up going to do some work in Japan.

What did you make of the whole Invasion angle?

Hindsight is always twenty-twenty, you look back and I feel they should have just left it alone. Vince could have owned it but he could have let somebody else run it and you could have still had the competition with the guys in two separate companies, he could have made a killing but Vince has an ego and Eric had an ego and they both wanted to own the wrestling world. With that in mind, I think ego took over and he brought the company and converted it into one but I think they look back now and should have kept it as two single companies.

You never went back to WWE, but did make appearances for TNA and began a feud with The Dudley Boyz, what was it like working with them?

It was great working with The Dudley Boyz, they can work and they understand the business. It was very enjoyable for me it was catching the tail end of my career and lots of people wanted to see me go back and wrestle with my brother. It was fun and I still enjoy getting in the ring and roughing it up, and it was a dream match that a lot of fans wanted to see.

What do you make of the current state of tag team wrestling in both WWE and TNA?

I just think the heyday of tag team wrestling was through the nineties, you had so many great teams, when Road Warriors came onto the scene they just knocked it out of the park. There were a lot of great tag teams back then and there was a big pool to choose from, I just think it’s dwindled off, me and my brother wrestled for 20 years together and they just don’t keep guy together that long anymore. 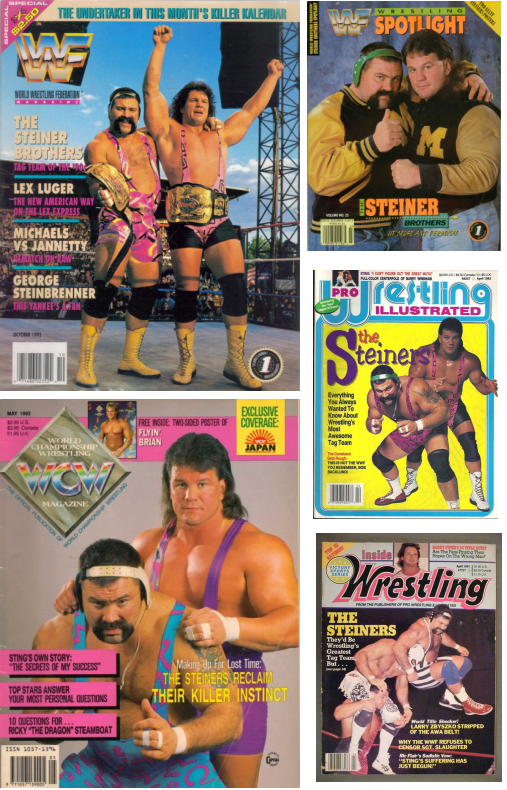 With an amateur wrestling background, if UFC was around when you were breaking through would that have been an option for you?

It’s kind of funny because the UFC started in 1993 and they actually approached me a couple of times but I had a pretty good deal with Turner and I didn’t want to leave that but if they had come around when I went out I would have definitely given it a shot.

I enjoyed mixing it up and getting in the ring, going one-on-one with guys and I really liked the amateur wrestling so it would have suited me just fine, I don’t know if I would have been any good but I would have loved to have got in there and mixed it up with the guys.

You and Scott are coming over to the UK later this year to wrestle for Preston Championship Wrestling, along with a host of other stars, what can the UK fans expect from The Steiner Brothers?

Scott and I are coming over to the UK with Preston Championship Wrestling and we are going to give the fans the best show possible. You’re going to see the old ‘Dog -Faced Gremlin’ running around and barking, I’m going to be giving those clotheslines out and suplexing people. We’re going to do everything The Steiner’s are capable of doing from the nineties and we’re looking forward to coming over to the UK.