I was lucky enough to attend a exclusive hands-on community event for WWE ’13 in Los Angeles over the WWE SummerSlam weekend, what was the game like? Find out below… 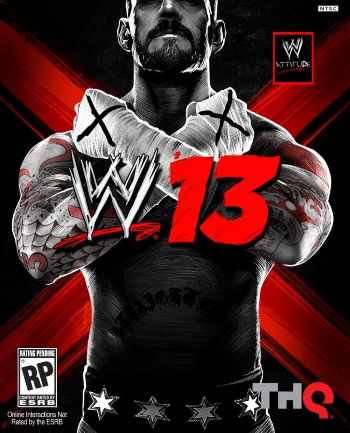 First, a disclaimer; I love the Attitude Era. I LOVE it. It was my childhood; it was my Hulk Hogan, my Transformers, my Teenage Mutant Ninja Turtles, my Ghostbusters, my Pokemon. It was possibly my first genuine pop-culture love. I love it. I love every ridiculous, stupid, over-booked, wacky part of it and, a good ten years or more after it ended, I think I can safely assume I probably always will.

I put that out there, because this year, THQ have, depending on your view, taken a pretty brave gamble, or admitting to the WWE’s failings by launching their video game series back 14 years (Jesus, 14 years!?) to pro-wrestling’s last golden age. This is concerning the new story mode and, potentially, the biggest selling point of WWE ’13; the much mentioned “Attitude Era Mode”. This may seem backward, but I believe, for the readers of this site, that this new feature might be make or break when it comes to them deciding if they want to be a continuing part of this often derided series.

The Attitude Era Mode is a traditional campaign mode based around real events that took place in 1997 and 1998, and concentrating on the careers of several specific wrestlers (no choosing or creating your own protagonists here I’m afraid). This “story mode” will take you through a linear sequence of 65 matches, telling the intertwined stories of “Stone Cold” Steve Austin, The Rock, D-Generation X, Kane, The Undertaker, Bret Hart and Mankind, broken up by fantastically well pieced together promos and clips (think about the videos that came before each of the WWE All-Stars dream matches, only about real matches, and with people you care about). 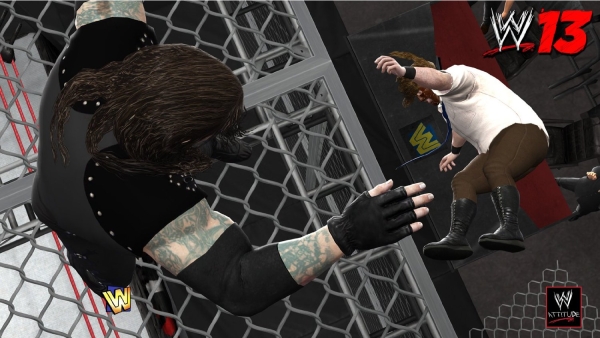 Each match is one that actually happened and, for extra points, you can complete bonus objectives which require you to do certain actions that happened in the match’s real-life counterparts. These objectives can range from rather unpredictable quicktime events, to using specific moves, to winning via a specific method and the points can then be used to purchase unlockable items like photo albums and videos.

There’s an abundance of smarky goodness to go along with it, such as week by week ratings breakdowns of the Monday Night Wars (seriously) and a roster of over 30 wrestlers from the late 1990’s, including alternative costumes for those few still around today. For example, you can choose between modern Triple H, late-90’s D-X Triple H, and mid-90’s Hunter Heart Helmsley Triple H, and your choice will impact more than just outfits; hair, facial features and even body size is all different. Sadly, it’s as yet unknown if wrestler’s move sets will be different depending on the era.

Another fact about the Attitude Era Mode that I’m assured will please players of WWE ’12 is that the post-game cut-scenes no longer interfere with the match endings. All the story-mode’s matches end with you still very much in control, and any post-match, cut-scened antics happen after the bell. 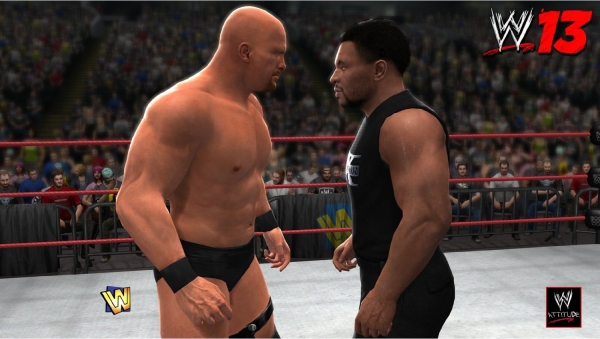 All that said, of course, there are negatives to take into consideration too. In it’s current form, there seems to be no real story-mode for modern or created superstars outside of WWE Universe Mode, which may come as a serious blow to the CAW fans out there. Then there’s minor concessions to it being 2012, like Steve Austin’s fingers being constantly blurred out mid-match whenever he deploys them, which is notable and ever so slightly annoying.

All in all though, Attitude Era mode looks like THE selling point of the game this year and, as an admittedly unashamed fan of the era, it’s a feature that’s strongly tempting, especially given the length and realism of the campaign itself.

Ah realism, ridiculous, pedantic realism. The cut-scenes are borderline motion-captured in their accuracy, and things like on-screen graphics and even the “Copyright 1998” flashing across the bottom corner of the screen make you long to be 11 years old again. Oh, and of course, there’s no Michael Cole to be seen, as Jim Ross retakes his rightful place in the announcer’s chair. 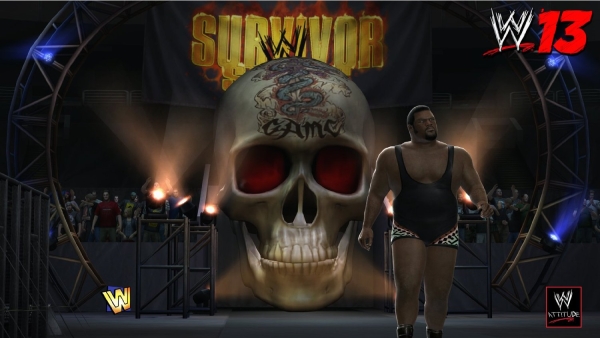 Outside of the Attitude Era mode, the changes to gameplay aren’t so radical. One of the most immediately apparent are the “OMG” moments; situations where you can use your stored finishers to pull off high-spots like spearing through crowd barriers, catching opponents with finishing-moves as they come off the top rope, breaking the announcer’s tables, and super-plexing heavyweight superstars through the ring (a spot that’s sure to become the finish of every single online match due to how ridiculously dramatic it looks).

Talking of heavyweights, there’s also been some changes to how they’re presented, and how they wrestle. In terms of presentation, super-heavyweights are now animated completely differently to other wrestlers. It’s a minor change, but a noticeable one, with guys like Mark Henry and the Big Show standing and moving and looking clearly unlike their smaller opponents. It’s also no longer possible for, for example, Daniel Bryan to power bomb Mark Henry, and lifting moves carried out by lightweights on heavyweights are now replaced with more realistic strikes (although, sadly, this can result in you only doing the same one move over and over again as a smaller wrestler against a bigger one). 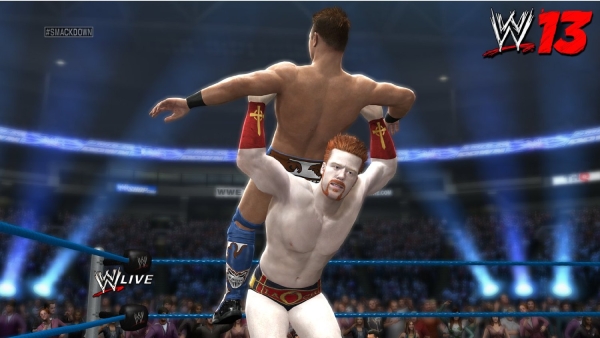 I should be clear, this is evolution, not revolution, and, unlike last year, THQ seem unashamed to admit this. The pinning and submission systems are still annoying, and everyone with long hair still looks like they’re wearing a strategically cut paper bag. Not all the problems have been ignored though; the constant issue of cutting between animations seems to finally have been dealt with and, apart from the occasional glitch (we should take into consideration that the game is still not finished before being too concerned about such things), the matches provide a far smoother experience than last year’s offering, and only a drastic change between the game I played and the final product could be fairly criticised for it’s choppiness in the way previous releases have been.

Aside from the Attitude Era Mode, THQ’s other big push this year seems to be the sophomore Create-an-Arena mode. This time around, it’s gone into absolute over-drive. I’ll put my cards on the table and say, fun as it was, this mode didn’t grip me too much last year, but, if it was your thing, THQ have dramatically raised the bar. EVERYTHING is customisable, from the capacity of the arena, to the ability to dramatically alter the stage and video-screens, even down to what t-shirts the fans are wearing in the background (seriously). I didn’t personally get any hands on experience with this mode, but, from what I saw, the quantity of customisation has increased enormously.

So this is why I made my disclaimer at the beginning. The gameplay itself is virtually unchanged, and only one creative mode has been released. For me, the be all and end all here is the Attitude Mode, and it’s hard for me to look at it as anything other than a blinkered, gibbering, markish fan of the period. But in many ways, that’s the point, that’s who this mode is for. This is for everyone who wants to play a wrestling game full of wrestlers they remember, having matches they remember as parts of story lines they remember. This is a blurred out middle finger to post-monopoly wrestling and, as a disillusioned wrestling fan, it’s an incredibly exciting one. In WWE ’13, THQ have taken the bold step of, for the most part, letting their game-play engine mature, but subtly, and slowly. The aim of the game here is extending playability and immersion; a reason to keep playing after that second month. Anyone who’s familiar with the game Legends of Wrestlemania, specifically the Relive mode, will have a good understanding of the way WWE ’13 will be presenting it’s single player campaign’s matches, and will hopefully appreciate the effort to insert length, nostalgia, character and context into a single player game that is often dismissed for it short life span and repetitive nature.

To many of us jaded wrestling fans, a return to the Attitude Era has long been held as one of the only ways to get us watching again, but with THQ’s nostalgia-baiting choice of single player mode, will it be the trick to get us playing again too?