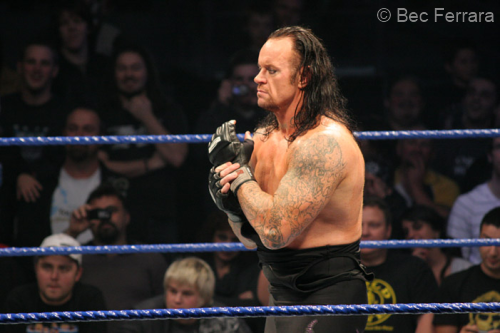 Just thirteen nights before WrestleMania, the 983rd edition of WWE Monday Night RAW SuperShow came to you, live, from the Wells Fargo Center in Philadelphia, PA. With their End of an Era Hell in a Cell Match rapidly approaching, three legends would come face-to-face in the ring as Hell in a Cell combatants Triple H and The Undertaker would join Special Referee Shawn Michaels in the same ring at the same time. Despite being in a minor car crash earlier in the day, John Cena would compete on RAW as Cena would go one-on-one with “The World’s Strongest Man” Mark Henry.

After Chris Jericho revealed the dark truth that CM Punk’s father was an alcoholic last week, the show kicks off with WWE Champion CM Punk. Punk first says that Jericho is not in the arena before saying that it is a “gift” that Jericho isn’t there because Jericho pissed him off last week. Punk continues that, while those close to him know that his father is an alcoholic, it was not Jericho’s “story to tell”. Punk then says that, it was not so much that Jericho said it, but that he said it in front of a live crowd and a worldwide television audience. The WWE Champion continues that there is not a person around the world who has not been affected by the “disease of alcoholism”. Punk then says that Jericho just wants to get inside his head for a potential advantage at WrestleMania before saying that Jericho does not know him at all. Punk then vows that, if there is a “monster” inside of him, then he is going to “let the monster out” come WrestleMania. Punk then says that there is not a person on the planet who should let a “past nightmare dictate or cloud their future dreams”. Punk continues that Jericho forgot to finish the story last week before revealing that his father has overcome his alcoholism. Punk then proclaims that he is “proud” of his father. Punk continues that he is proud of his father and he is proud of being straightedge before saying that Jericho is an “obstacle” and he will go “straight through” Chris Jericho at WrestleMania to prove that he is “the best in the world”.

Before Punk can exit the ring, Chris Jericho appears on the big screen, live via satellite, to apologize to the WWE Champion, saying he is “sorry” for bringing Punk’s father into their feud and he will “never” bring up Punk’s father again. However, Jericho then says that Punk’s sister is a different story before saying that he found all about Punk’s sister’s “substance abuse problems”. Jericho then says that there is a “pattern” in Punk’s family and Punk will be the victim of it and, while alcoholism and drug abuse can be overcome, Punk will not overcome when Jericho is crowned the new WWE Champion. The rage of CM Punk then boils over as Punk shouts an unairable obscenity at the #1 Contender before vowing to beat the crap out of Jericho at WrestleMania! Has Chris Jericho created a monster by forcing CM Punk over the edge? Will Jericho pay for his meddling come WrestleMania?

Two weeks before their respective matches at WrestleMania, two giants would collide on RAW as “The Big Red Monster” Kane went one-on-one with “The World’s Largest Athlete” Big Show. Before the match begins, Big Show’s WrestleMania opponent, Intercontinental Champion Cody Rhodes, comes out to ringside. During the match, Cody Rhodes gets on the ring apron, distracting Show long enough for Kane to get ahold of Show and chokeslam him off of the top rope en route to picking up the win. After the match, Cody Rhodes would strike, hitting the Beautiful Disaster Kick on Big Show before Rhodes uses a pair of handcuffs to handcuff Show to the middle rope. Rhodes then gets a pair of boxing gloves, wailing away at the skull of the helpless giant before referees are finally able to restrain Rhodes while Big Show is cut loose from the handcuffs.

Thirteen nights before he captains Team Teddy in the 12-Man Winner-Takes-All Tag Match at WrestleMania, United States Champion Santino Marella, with SmackDown General Manager Theodore Long in his corner, went one-one-one with the team captain of Team Johnny, David Otunga, with Interim RAW General Manager John Laurinaitis in his corner. During the match, John Laurinaitis inadvertently slides his cell phone into the ring and Santino Marella stomps the phone into oblivion. However, this distraction allows David Otunga to hit his modified spinebuster on Santino en route to picking up the win. After the match, John Laurinaitis rubs Otunga’s win in the face of Theodore Long and receives a slap to the face from Long!

In a pre-taped message for his WrestleMania opponent, John Cena, The Rock appears in front of the Rocky Balboa statue in Philadelphia, saying that, since he was a little kid, he aspired to be as big as Rocky. The Rock continues that, throughout his storied career, he has beaten the greatest of all-time as he has defeated Hulk Hogan and Stone Cold Steve Austin, but John Cena still remains. Rock then says that he will appear live in the arena with a message for Cena and, after WrestleMania, all the greats will “thank” him for what he did to Cena.

Thirteen nights before he defends the World Heavyweight Title against Sheamus at WrestleMania, World Heavyweight Champion Daniel Bryan, with A.J. in his corner, went one-on-one with “The Long Island Iced Z” Zack Ryder, who competed for the first time since December. In the end, it was Daniel Bryan locking in the LeBell Lock on Zack Ryder, forcing Ryder to tap out to pick up the win.

Despite being in a car crash earlier in the day, John Cena was in action on RAW as, thirteen nights before he goes one-on-one with The Rock at WrestleMania, Cena went one-on-one with “The World’s Strongest Man” Mark Henry. Despite being dominated by Mark Henry for most of the match, John Cena was able to come out of nowhere and hit the Attitude Adjustment on Mark Henry en route to picking up the win. However, there was no time for celebration for John Cena as The Rock marches to the ring, delivering the Rock Bottom to Mark Henry in a clear-cut message to Cena!

The Miz appears on RAW as Miz states that, in 1987, King Kong Bundy was in the main event of WrestleMania 2, but the following year, Bundy faced Hillbilly Jim and two little people at WrestleMania III. This occurrence would become known as the “biggest main event drop-off in WWE history”, but that looks to be occurring this year with himself. Miz continues that, while King Kong Bundy had a match at WrestleMania, he still does not, adding that he refuses to not be a part of WrestleMania this year. Miz then reveals that he has laid out an open challenge with the intent of proving that he is worthy of being on Team Johnny at WrestleMania. However, the man who answers the challenge is none other than the #1 Contender for the World Heavyweight Title, “The Great White” Sheamus!

In an open challenge designed to prove himself worthy of being on Team Johnny at WrestleMania, The Miz went one-on-one with the #1 Contender for the World Heavyweight Title at WrestleMania, “The Great White” Sheamus. In the end, it was Sheamus blasting The Miz with the Brogue Kick en route to picking up the win.

Thirteen nights before he goes one-on-one with “The Big Red Monster” Kane at WrestleMania, “The Viper” Randy Orton appeared on RAW. When asked how he plans on defeating Kane, Orton asks how Kane plans on defeating him. Orton continues that he looks into Kane’s eyes and there is no sign of humanity in Kane. Orton then says that he is not “The Big Red Monster”, his name is Randy Orton.

The two newest members of Team Johnny, Dolph Ziggler & Jack Swagger, were in action on RAW as Dolph & Swagger, with Vickie Guerrero in their corner, faced two members of Team Teddy, R-Truth & Kofi Kingston, with Aksana in their corner. In the end, it was Dolph Ziggler hitting the Famouser on R-Truth, but Truth manages to get his foot on the bottom rope. However, Vickie Guerrero pushes Truth’s foot off of the rope, allowing Dolph to pick up the win. After the match, Aksana would shove Vickie down moments before a brawl breaks down between Aksana and Vickie in the ring!

Then it was time for a face-off to remember as, thirteen nights before the End of an Era Hell in a Cell Match, “The Game” Triple H, “The Phenom” The Undertaker, and Special Referee, “The Heartbreak Kid” Shawn Michaels, would all come face-to-face in the middle of the ring. Shawn Michaels is the first to come out as Michaels says that everyone is talking about his assignment as the Special Referee and that he holds the End of an Era in the palm of his hand. Michaels then gives his “opinion” on what he “thinks” will happen as Michaels claims that the End of an Era is “code” for the “end of the streak”. Before Michaels can continue, he is interrupted by the arrival of The Undertaker. Undertaker tells Michaels to “shut up and listen” before re-iterating that the WrestleMania match must be “pure”, but before Undertaker can continue, Triple H comes out and joins Michaels and The Undertaker in the ring. Triple H states that it is not about Shawn Michaels, it is about himself and The Undertaker and their one connection, Hell in a Cell. Triple H continues that there have been twenty-four Hell in a Cell Matches and he and Undertaker have been in nineteen of them. Triple H then says that, inside the Cell, he learned to end careers, adding that he “thrives” in the Cell. Triple H continues that, everything he has been through has been for one moment at WrestleMania and, at WrestleMania, The Undertaker’s era will end. Undertaker then asks if Triple H is ready to put his “family” and even his “life” on the line and Triple H confidently says that, if it means giving Undertaker the “end” that he deserves, then he is and he will. Before leaving the ring, The Undertaker contemplates before asking if Triple H remembers when he said that Michaels was better than Triple H. Undertaker then looks Triple H in the eyes and says that he is, which puts a smile on the face of Michaels, leading to a stare down between the two friends.