I’m worried for CM Punk…seriously you guys. I mean, I’m supposed to be writing a preview for tonight’s Elimination Chamber, but how can my boy win without a beard? Locked in a chamber with 4 other guys and the Miz. He needs the power only a beard can bring to survive those kinds of odds. Look at Daniel Bryan, beard = the power to overcome odds. There’s other stuff happening in this PPV, but to be honest I’m in a facial hair related frenzy right now. Let’s just see if we can get through this without me freaking out… 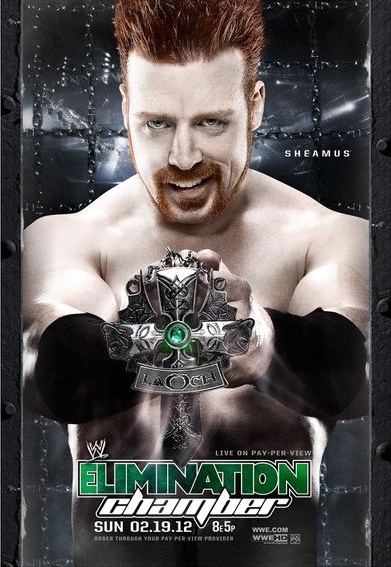 WWE’s very own “Callous Coliseum” rolls around tonight, the unforgiving Elimination Chamber. 6 men enter, but only one can leave with not only the title, but also the right to wear that strap with pride heading into WWE’s biggest show of the year.

So not only are we gonna decide who gets to walk into Mania as champion, we also get Divas Title goodness (and if Jimmy Redman is to be believed quite possibly full blown eye sex), as well as either Cena or Kane leaving in an ambulance. Which has to mean that Zack Ryder’s probably gonna be leaving in an ambulance too, right? That’s how this works, isn’t it?

Oh, and RIP CM Punk’s beard…but I don’t wanna talk about that. Let’s just put that painful bit of news aside and take a closer look at the card.

Okay, so I’m totally down with the whole recreation of Superfly that they’ve done with Tamina recently. It really does work, and it’s a helluva lot better than when they had her just being some non-descript wench in awful ring gear. It’s a shame her top rope splash is pretty rubbish though, that kinda kills the end of her matches for me. Everything else right up until the finish is pretty cool though at the moment. I don’t think Tamina’s ready for a title run yet, but it should be enough to keep Beth busy until the inevitable return of Kharma (which I personally cannot wait for).

There’s not much else to be said about this one, Beth is still the Glamazon, and therefore better than pretty much everyone else (include Nattie until they stop this horrendous flatulence gimmick), so let’s just jump to some predictions, shall we?

Who I want to win: Beth Phoenix, if only to ensure we get Beth vs. Kharma at some point

Who I think will win: I still think it’s too early to put the title on Tamina, but you never know. Especially after the ending of the tag match on Smackdown this past Friday (not the referee repulsed by Nattie’s guffs, the fact that Tamina sparked Beth out with a single kick). I think they might have Tamina win this thing. They keep playing up the Snuka family heritage, so it wouldn’t surprise me if WWE do what they usually do and push someone to the moon waaaay too quickly.

So if you remember my Royal Rumble preview, you’ll recall I’d been taken out of this whole angle by John Cena’s angry face. Well it’s completely dead to me now. Don’t get me wrong, I like a bit of cheesiness as much as the next guy, but this is just too much. The whole ambulance thing on this week’s Raw was too much for my mind to comprehend. This needs to take it’s rightful place in the WrestleCr*p hall of fame, and we all just need to move on.

I honestly couldn’t care either way now whether Cena embraces the hate. It’s not even as if I hate Cena either though, this whole angle is bringing nothing out of me other than completely neutral apathy.

Well actually that’s a bit of a lie, the one emotion this angle has brought out in me is absolute outrage at how Zack Ryder’s been treated. Way to reward the guy for the hard work he’s done by making him look the goobiest of goobers in the whole of gooberville. I am disappoint WWE, I am disappoint.

So yeah, Cena or Kane are gonna be shipped out in an ambulance. I’ll give you three guesses as to who it’s most likely to be. And I know the big question isn’t supposed to be who’s going to win, but more “is Cena finally gonna embrace the hate?”. Well here’s your answer. No, no he’s not. John Cena isn’t just the t-shirt shilling women and children’s favourite. He’s also the WWE ambassador for all things charity, the face of the company as far as the media are concerned, the dude who will always make an effort for anyone who asks for him, whether it’s the troops, Make A Wish, Be A STAR, or anything like that. They’re not going to turn John Cena heel, because that would mean no more Mr. Nice Guy outside the ring, as well as in it.

So yeah, sorry to dash all your hopes of some kind of epic Cena heel turn, but until someone arises to overtake Cena and all his work outside the ring, then we’re gonna keep hearing about Hustle, Loyalty, and Respect for the foreseeable future. Regardless of how much all us smarky adults continue to hate.

Who I want to win: Meh, either guy. Let’s say Kane for the hell of it.

Who I think will win: John Cena, and then he’ll smile and salute, and I’ll die a little more inside…

Oh Santino, I know a lot of people have been all “WTF? Santino?” since Friday (well Tuesday, but you get my drift) but after watching this week’s Smackdown, it all makes sense. The end of that Battle Royal was such a feel good moment for the fans, that I couldn’t help but smile a little. Santino played it so well too, selling the win as such a big deal drilled home how important a spot in the Elimination Chamber should be to each and every wrestler…sorry, Superstar on the roster.

Which is why it’s such a shame that I don’t think Santino is actually going to make it into the chamber (as much as I’d love to see him in there). Remember when Edge obliterated Kofi Kingston on his way to the Chamber and took his spot? Yeah, I can see that kind of thing happening again tonight. In fact, after last year’s Royal Rumble I’d really like to see ADR come and snatch Santino’s spot away. Don’t ask me why, I just really like the idea that whenever it looks like Santino is about to achieve something great, Del Rio appears to take it away. Someone else made a cracking point on the TWO Forums that Drew MacIntyre could take Santino out in some effort to impress Teddy Long. I wouldn’t be averse to seeing Drew beast some people in the Chamber again (which sounds a lot filthier than I intended it to).

So how about the other competitors in the match, in my mind there’s now only two people who can walk out of the chamber match as champion, and that’s got to be Big Show or my boy D Bryan. Cody already has his IC Title, and I can’t see them pushing him to the next level just yet (although he did say he was gonna do a “Warrior”, so I guess it’s not outside the realms of possibility). Barrett is finally back to where he was before the destruction of the Nexus, but he’s still not quite at main title level yet (another 6 months of strong showings should do it). And Khali? Khali is…well…sh*t to be honest.

So that’s who my Smackdown Chamber boils down to. Daniel Bryan and Big Show, and I’m not putting it past WWE to maybe have Bryan eliminate Show early on in some kind of shock fashion. Let’s see if we can’t figure out who’s gonna win.

Who I want to win: Daniel Bryan. He’s been superb over the last few weeks, and seems to be increasing in confidence week upon week. I’d love nothing more than for WWE to let him retain the title and start actually beating people as a heel.

Who I think will win: Daniel Bryan. I know it seems unlikely, but I expect some kind of tricks and shenanigans, just Bryan pulling out every heel tactic in the book to retain his title. And then be completely hated for it. Instant heat. Please WWE, make it happen.

Elimination Chamber for the WWE Championship
CM Punk © vs. Chris Jericho vs. Dolph Ziggler vs. Kofi Kingston vs. R-Truth vs. The Miz

Yep, my favourite skeevy looking Best Wrestler in the World (suck it Jerichoholics) has lost his facial fuzz. I’m officially in mourning. I don’t know if I’m going to be able to carry on. I mean I could talk about how Kofi Kingston is gonna be guaranteed to get in at least one awesome highspot with all that chain link cage to play around with, but that wouldn’t bring Punk’s beard back. I could pontificate on how this is the chance for Dolph Ziggler to really make a run at becoming a fully fledged main eventer, but I’d just see Punk’s bald face grinning at me, mocking me with it’s hairlessness.

I could talk about how if The Miz ever wanted to do something to get back in WWE’s good books, then now would be a perfect time to take a stab at that. But it wouldn’t stop a decade of stylish beard wearing being brought to a shattering halt.

Maybe I need to take some perspective on this. Maybe I need to concentrate on R-Truth…yes…that helps, let’s just think about President R-Truth and his grand master plan to trade Dolph and Vicky for Hornswoggle and a box of spiders. Thank you R-Truth, thank you from bringing me back from the edge of despair.

Truth be told (BAMN! Segue bitches!), I’m worried about CM Punk’s title waaaay more than his lack of facial hair concerns me. And you know why? Chris frickin’ Jericho. If the rumours are to be believed, and we are going to get Jericho vs. Punk at Mania, then I see it happening through Jericho walking out of the Chamber as the champion.

And that is why I fear for CM Punk’s title reign. Let’s make some predictions.

Who I think will win: Oh man, as much as I’d love Punk to win, and survive the chamber (which would do a lot for legitimising him as champion) I just think it’d make the lead up to WrestleMania a bit boring. I can see Jericho winning the title tonight, then Punk winning it back at Mania in his “WrestleMania Moment” and finally being able to refer to himself as the undisputed Best Wrestler in the World (which he is).

And that’s about it folks. Divas having eye sex (which I never thought I’d ever have to type), two Chamber matches in which almost anything could potentially happen, and (to coin a popular British crowd chant) someone’s “goin’ ‘ome in a f*ckin’ ambu-lance!!”

So what do you think is gonna happen? We’ve got a big old comments box down there just waiting for you to slip something into it. And not that. You disgust me.